Nishanth Kalavakolanu and his family drove from Austin, Texas, to Aurora to say “thank you” to Nishanth’s caregivers at CU Anschutz. Some of those caregivers are part of a working group on FIRES, the mysterious condition that upended his life in 2018. Research has found there is an abnormal response to inflammation involving cytokines. This runaway inflammation is potentially one of the causes of FIRES and is a target for treatment.

Among its many harsh lessons, 2020 has reminded the world about the power of waves – as in the alarming swells that come with a pandemic.

For Nishanth Kalavakolanu, it was an idyllic September day in 2018 when a health crisis of a different, but also mysterious, sort crashed his world. It arrived as a sudden surge that upended the healthy young man – a military cadet, no less – and left him fighting for his life.

Parents’ weekend had just kicked off at the Air Force Academy (AFA) when fever and fatigue gripped the 19-year-old. His condition quickly worsened into seizures, spurring a series of hospital visits – the first two in Colorado Springs – until Nishanth was put into a medically induced coma for 10 weeks at the Intensive Care Unit (ICU) at UCHealth University of Colorado Hospital.

With his parents, Lakshmi and Anil, at his side, Nishanth was hospitalized for a total of seven months, including the final stretch, a pivotal rehabilitation period, at Children’s Hospital Colorado on the Anschutz Medical Campus.

At Children’s Colorado, he was treated by a team of physicians that had experience with his rare and frightening condition: febrile infection-related epilepsy syndrome (FIRES). The neurologic condition can leave young people – the average age of onset is 10 or 11 – with learning disabilities and chronic epilepsy. The Children’s Colorado team, which typically sees one or two FIRES cases a year, is studying new treatment options and causes of the condition.

After receiving seven months of expert care at CU Anschutz, Nishanth Kalavakolanu returned in spring 2019 to his home of Austin, Texas, as a retired Air Force veteran.

“Everyone came into our life at a certain time to do their part,” Anil said. “We knew we were in safe hands.” The collective effort saved the life of Nishanth, who returned, as a retired Air Force veteran, to his family’s home in Austin, Texas.

This month, the Kalavakolanu family rented a Ford Expedition and road-tripped back to Colorado – almost 2,000 miles round trip – to say “thank you” to Nishanth’s caregivers.

First, the family met with several doctors and nurses from UCHealth University of Colorado Hospital. Katherine Mayer, MD, an assistant professor of critical care medicine and emergency medicine in the CU School of Medicine, was part of the UCHealth team that cared for Nishanth.

Mayer spoke of his fragility while in the ICU – Nishanth was dependent on others for every breath from the ventilator, every drop of food and liquid going into his many tubes, and every medication subduing his brain activity – was both humbling and motivating.

“To reunite with a walking, talking, interactive Nishanth was – in a word – surreal,” Mayer said. “While in the ICU, I had never seen as much as a flicker of his eyelids. Cases like Nishanth's move me and the collective ‘us’ to keep suiting up for the work ahead, and I am honored to have been a small part of this journey.”

In early October, Nishanth's family met with his caregivers at Children's Hospital Colorado. Two of those physicians, Drs. Craig Press and Krista Eschbach, at far right,

are part of a national FIRES working group that has developed a proposed treatment pathway that is under review for journal publication.

The providers beamed during the gathering, remarking how unusual it is for a patient to travel hundreds of miles just to say thanks. “This is pretty special,” Press said.

“There were some awful times,” said Lakshmi, reflecting on the chaos and confusion of fall 2018.

Despite the difficulties, the dark emotions were not triggered by seeing Nishanth’s caregivers, Lakshmi said during the reunion. “What we feel is gratefulness. We were lucky to have met them. Everybody is like family.”

Before driving north to the Anschutz Medical Campus, the family stopped in Colorado Springs to reunite with members of Nishanth’s squadron. His research program at the AFA was cut short by the illness, so Nishanth is now applying to select colleges with Service-to-School programs for veterans. 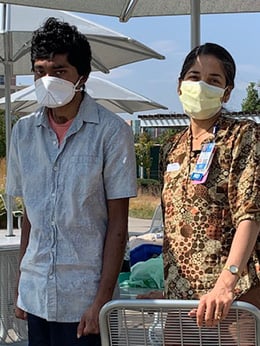 Nishanth with Charuta Joshi, a neurologist

Because FIRES causes brain trauma, Nishanth is experiencing a recovery not unlike veterans who have suffered traumatic brain injuries, said Press, director of Children’s Colorado’s Pediatric Neurocritical Care and the NeuroRecovery Program.

Nishanth struggles with the side effects of anti-seizure medications – his mucus membranes are inflamed, including his digestive tract – leaving him unable to eat many solid foods. At 5-foot-9-inches, he weighs only 92 pounds after climbing back up from a low of 76.

Acknowledging the slow and challenging recovery, Nishanth keeps his mindset locked on learning – he’s become an expert on FIRES and NORSE, new-onset refractory status epilepticus, a related condition – and perseverance.

“I just kind of see that it’s something I have to do,” he said of his recovery. “I have to just keep going.”

Trying to solve the puzzle

Before coming to Colorado, Joshi, a neurologist specializing in epilepsy care at Children’s Colorado, practiced in Iowa, where she treated many cases of FIRES. Through the tight-knit Indian-American community, Joshi in September 2018 was put in contact with Lakshmi soon after Nishanth’s admittance to a hospital in Colorado Springs. One of the first questions Joshi asked over the phone: “Did they tell you he has FIRES?”

The FIRES expertise at CU Anschutz continued when, shortly after Nishanth was put into a coma (it’s common for doctors to induce comas in FIRES patients to prevent the brain from seizing), Press and Eschbach visited and explained the treatment options. They included the positive outcomes he and Eschbach had seen in patients using Anakinra, a drug approved by the Food and Drug Administration to treat juvenile rheumatoid arthritis.

Press and Eschbach are part of a FIRES working group that has developed a proposed treatment pathway that is under review for journal publication. Through collaboration with researchers at the Mayo Clinic, an abnormal auto-inflammatory response (reduced IL-1 receptor antagonist activity) has been identified in some of the patients treated at Children’s Colorado with FIRES. This has led to understanding potentially one of the causes of FIRES.

“There are probably other causes of it that we haven’t yet identified, but the discovery of this abnormality has been exciting as it has helped guide treatment options, such as consideration of Anakinra,” Eschbach said.

Eschbach also contributed to a case series on the use of Anakinra (an IL-1 receptor antagonist) in the treatment of FIRES. This examined 25 patient cases, the largest-to-date collection of data on the drug’s performance related to FIRES. The study will be published soon in the Annals of Clinical and Translational Neurology.

Overall, the doctors are impressed by Nishanth’s recovery. FIRES patients often experience balance and vision difficulties as well as cognitive struggles. Historically, about 77% of FIRES patients survive, but only 10% to 20% recover with more normal cognitive abilities. Almost all have learning disabilities and chronic seizures.

‘A story to tell’

Nishanth sometimes gets down – fully aware that his peers are leading much-different lives – but he finds inspiration from his supportive family and his hobbies, including playing poker and guitar.

Joshi, chatting with the family during their visit, recommended that Nishanth chronicle his experience as a way to process his journey. The young man agreed, saying, “I have a good story to tell.”

For his 21st birthday in April, Nishanth celebrated with a Zoom call with some of his Air Force friends. He asked for a birthday meal of steak and wine, so his mother went to a liquor store and asked for their best red wine.

“I got home and looked at the label, and it said, ‘Perseverance,’” Lakshmi recalled. “I said, ‘This is just right.’ ”

FIRES is a sub-type of a condition called NORSE (new onset refractory status epilepticus). NORSE refers to the onset of refractory status epilepticus in a previously neurologically healthy individual without a clear cause identified with initial testing. The NORSE Institute, in collaboration with Yale University, has created a biorepository and prospective data collection of patients with NORSE, including both pediatric and adult patients. The University of Colorado, including both UCHealth University of Colorado Hospital and Children’s Hospital Colorado, are in the process of joining as a site for enrollment into this biorepository and database.