Home News The mystery of FIRES back to News

Amid the pageantry of a holiday weekend at the Air Force Academy, a cadet suddenly feels fatigued and feverish. His condition quickly worsens until he starts having seizures. 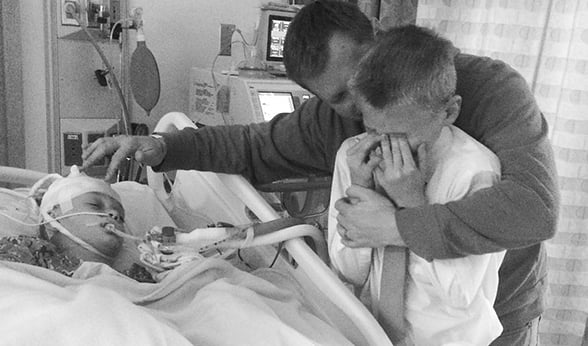 An 11-year-old girl, shortly after a guest performance with the Boulder Symphony, develops a fever. Days later she becomes confused. Seizures follow.

Cases such as these illustrate the mystifying – even diabolical, as one parent describes it – nature of febrile infection-related epilepsy syndrome, or FIRES, a neurologic condition that can leave once-healthy young people with learning disabilities and chronic epilepsy.

The onset is so quick and severe that doctors are left to run a battery of tests for other types of epilepsy as well as encephalitis, meningitis and other neurologic conditions. FIRES becomes a diagnosis of exclusion, after every other possible condition has been ruled out.

What could cause a syndrome that can so quickly turn a life upside down? Nobody knows.

But physicians and researchers at the CU Anschutz Medical Campus and nationally are working to unravel its cause and possible treatments. Epilepsy experts at Children’s Hospital Colorado (CHCO) have seen some positive responses from a relatively new experimental treatment.

“To have this sudden explosive onset – someone who is previously healthy and then is having seizures – FIRES is pretty unique in that sense,” said Krista Eschbach, MD, a Children’s physician who is among the experts studying the syndrome.

Cared for by the best

Nishanth Kalavakolanu, a second-year cadet at the Air Force Academy, was enjoying a visit from family last September when, on a sunny afternoon, he felt waves of fatigue. His parents were in town from Austin, Texas, for the academy’s annual parents weekend, and his sudden illness prompted a trip to a Colorado Springs hospital. That spurred a traumatic odyssey stretching into months as Nishanth found himself admitted to four different hospitals, the latter two being UCHealth University of Colorado Hospital in September and CHCO in November.

“We had faith that things would work out well in the end,” said his mother Lakshmi Damerla. “We knew he was being cared for by the best people, and that he had everything going for him in the hospital. It’s just a mystery what causes this.”

About two or three cases of FIRES are seen in Colorado each year. The average age of onset is 10 or 11, with other cases spanning the childhood spectrum, from toddlers up to teenagers.

In the 19-year-old Nishanth’s case, UCHealth providers consulted with Eschbach and Craig Press, MD, PhD, an assistant professor in pediatrics-neurology. Both CHCO epilepsy providers have experience with an experimental FIRES therapy. Nishanth arrived in a medically-induced coma due to constant seizures. It’s common for doctors to induce comas in these cases to quiet the brain while medications are given.

When he awoke on Nov. 7, Nishanth had been in a coma for 10 weeks, and Lakshmi and her husband, Anil, learned their son had FIRES. Doctors told the couple that some FIRES patients had experienced “remarkable effects” from Anakinra, a drug approved by the Food and Drug Administration to treat juvenile rheumatoid arthritis.

Since 2015, five FIRES patients have been treated with Anakinra at CHCO, all experiencing generally positive responses compared to historical outcomes, especially in terms of reduced frequency of seizures. Eschbach had heard about Anakinra being used in the treatment of a FIRES patient at the Mayo Clinic; Mayo’s 2016 study marked the first published literature citing the drug as a potential treatment for FIRES.

Eschbach is now working with an international group of physicians to improve the recognition, treatment and outcomes of children with FIRES. Through diagnosis protocol and treatment guidance, they hope to establish consistent approaches to patient care.

‘We knew he was being cared for by the best people, and that he had everything going for him in the hospital. It’s just a mystery what causes this.’ – Lakshmi Damerla, Nishanth’s mother

For instance, physicians hope to learn whether Anakinra is an effective treatment on its own, or combined with other medications. Doctors have also found that a ketogenic diet, high in fat and low in carbohydrates, is helpful for some patients. More study is also needed on that front.

Local physicians who treat the disease hope to get answers through collaborative research.

“It’s one of the strengths of having our hospitals so close together that we can do back-and-forth collaboration for the benefit of the patients,” Eschbach said.

‘Can’t wrap your head around’

For the families of FIRES patients the diagnosis can be devastating.

“It takes some time to absorb the shock,” said Natalee Gibson, whose daughter, Kailee, then 11, was treated for FIRES at CHCO four years ago. “It’s just something you can’t wrap your head around because there are no answers.”

Historically, about 77 percent of FIRES patients survive, but only 10 to 20 percent recover with normal cognitive abilities and almost all have learning disabilities and chronic seizures.

The Gibson family has noticed a distinct change in Kailee, who, among her many talents, performed with the Boulder Symphony just a few weeks before coming down with FIRES.

“She’s a fighter; she’s the strongest person I know; she’s definitely a very inspirational human being,” Natalee said. “But she’s not quite the same child she was.”

The family recently moved from the Front Range to Grand Junction, seeking a less-hectic atmosphere for Kailee. They installed a hyperbaric chamber in their home, after learning that some epilepsy patients benefited from hyperbaric oxygen treatment.

One thing they are sure of is the quality of care they have received on the CU Anschutz Medical Campus.

Providers haven’t just given outstanding treatment, they take an interest in their patients. They ask about the patients’ hobbies and passions, sit with families late at night while their children lay in comas, and even make time for special events, as was the case recently when the Air Force Academy hosted a temporary retirement for Nishanth.

Several members of his care team from both CHCO and UCHealth, including Press, Sunita Sharma, MD, and Brad Constant, MD, traveled to Colorado Springs for the ceremony, which was hosted by Brigadier General Kristin Goodwin. Not only was it a celebration of Nishanth and his many supporters, it signified something important to any cadet facing personal upheaval: he got to keep his full military benefits.

“It’s kind of like having another family,” Nishanth said. “It was a lot of support from these people who love me.”

Press connected Nishanth, who has played violin for 15 years, with his mother, who is an orchestra teacher and violinist. Her regular visits helped reconnect Nishanth to one of his passions as well as reestablish his neural pathways.

The hospital enhanced the violin lessons with a musical therapy program that brought a keyboard to his room.

“They were more like friends than people who worked with us. We now have a relationship that goes way beyond the hospital,” she said. “There were a lot of people who helped on Nishanth’s journey.”

Press said the year-old NeuroRecovery Program is a full-fledged team of specialists who care for patients from admittance to recovery to post-discharge therapy.

“Children’s is supporting us in a very forward-thinking way; it’s really an amazing investment,” said Press, who is director of CHCO’s Pediatric Neurocritical Care and the NeuroRecovery Program. “Ideally, we’ll be known, in the case of an acute brain injury, as the best place to go in the country for treatment and rehabilitation.”

Natalee Gibson, whose daughter was the first FIRES patient at CHCO treated with Anakinra, echoed the sentiments about the hospital’s care.

“It was very much a comforting place to be because of the staff and providers were so kind – it was like a bubble,” she said. “As terrible a time that was, I believe 100 percent that we needed to be at Children’s Hospital in Aurora. They saved our daughter’s life, quite frankly.”

Still, the devastating nature of the FIRES had its effect on Kailee, who before the syndrome struck was at the top of her sixth-grade class, a star soccer player and an accomplished musician.

“She was a rock star,” Natalee said.

Kailee spent six weeks in rehabilitation at CHCO, undergoing brain, speech and physical therapy. She responded well to the Anakinra treatment and the ketogenic diet, which were administered at the same time.

But due to the mysteries surrounding the syndrome, it remains unclear just what, specifically, helped Kailee.

“Was it one drug? The combination? The diet? Who can know?” Natalee said.

At the worst of her condition, which Natalee described as “diabolical,” Kailee suffered about 70 seizures a month. Now she has about 15 a month, and they aren’t as severe. Kailee can walk and dress herself, but she doesn’t have the same energy and stamina as before FIRES. Seizures can come any time: if she’s too tired, or experiences too much stimuli, a change in her schedule or diet.

“Our life with her is about maintaining the quality of life that we can give her while also giving her the best-possible control over her seizures,” she said.

Kailee, now 14, is homeschooled and requires all-day caretaking. She receives weekly visits from physical and speech therapists, and she continues playing piano and taking voice lessons.

The Gibsons have a strong religious faith, and they believe Kailee can continue to heal and regain normalcy in her life.

“Our role is to look at every option,” Natalee said. “I would like to see Western medicine join forces with other philosophies. I think if all these different medical approaches came together we might reach some better insights on how the brain works – it’s really the last frontier of healthcare.”

Meanwhile, Nishanth’s family is gradually reintegrating the cadet into his Texas life. 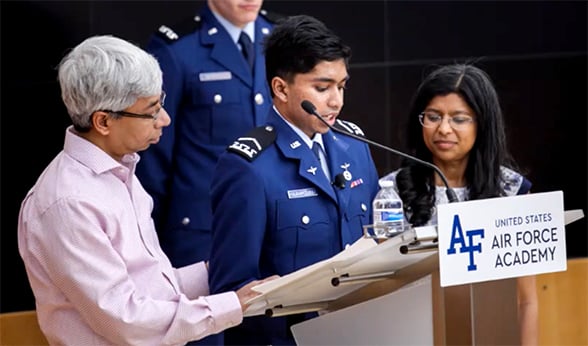 “We knew the end would be OK; we just didn’t know how long it would take to get there,” Lakshmi said.

But the long journey for Nishanth, a straight-A cadet who received a U.S. flag from his Air Force family during the recent celebration, will continue.

Emotion welled up in Anil when he speculated as to whether his son would be able to resume his academy career and attain his dream of becoming a pilot.

“He wants to go back to serve the country he loves,” he said. “We hope he can do that.”