From the moment of Brady Attar’s arrival into this world, as a beautiful baby boy who somehow had startling skin lesions covering his body even before his cord was cut, his family had much to learn.

Eileen and Chris Attar had their second boy at one of the best children’s hospitals in Texas, and yet the expert who could teach them the most about extremely rare Epidermolysis Bullosa was hundreds of miles away in Austin. It would be days and weeks before they fully understood, still in shock, that “EB” was a genetic disorder that in severe versions weakens skin and soft membranes to the point where patients like Brady have new raw wounds every day.

And with no cure, EB doesn’t end.

In those first weeks, Eileen says now, “I couldn’t believe it, such denial. There’s just no way this could exist, that it could be this hard. How will I do this every day of my life from here on out?”

One of the few of its kind

Three and a half years later, the Attars are themselves teaching some of the top clinicians and stem cell researchers in the world how families live with EB and where the first treatment breakthroughs might come. Having uprooted their family to Colorado in search of expertise, they spend a lot of time sharing their own knowledge with Gates Center for Regenerative Medicine researchers and Dr. Anna Bruckner, director of the Children’s Hospital Colorado EB Center of Excellence and her team. The Attars and other EB families from a multi-state region visit the clinic regularly for treatment because it’s one of the few of its kind in the nation.

Brady Attar takes a break from clinical talk while his family trades information with the care team at Children's Hospital Colorado.

On any given day, Eileen might tell Dr. Bruckner that Brady’s EB leaves him longing to taste ice cream, but unable on some days to even swallow water. Hours later, Eileen and Chris might sit at a table for an update with Gates Center PhDs working assiduously toward EB cures, and explain how EB lesions close up the throat.

“We are so thankful,” Eileen said of the research meeting, “that they keep us in their brains while they do what they are doing.”

The close integration and interaction of basic scientific research, treatment development and production, and world- leading clinical knowledge are what has come to distinguish the Gates Center and the CU Anschutz Medical Campus from many other academic hubs in the nation. In rare and highly specialized disciplines such as EB, only a few locations can offer families and researchers the combination of hands-on treatment and exploration of the underlying causes.

They also receive generous matching private funds (a requirement of this funding mechanism) from the EB Research Partnership in New York and the California- based EB Medical Research Foundation, which co-founded the Consortium in 2016 to create the multi-institutional partnership, and the London-based Cure EB Charity. The Colorado Team has additionally received funding from the U.S. Department of Defense, the Dystrophic Epidermolysis Bullosa Research Association (DEBRA) International, the King Baudouin Foundation’s Vlinderkindje Fund and the Gates Frontiers Fund.

This is the kind of real-world academic and clinical progress accelerating discovery from the lab to therapies and cures envisioned by Charles C. Gates and other generous funders when the Gates Center was originally founded.

The reason Eileen Attar gave birth to Brady in a room where few people knew anything about EB is that it impacts only about 20 in 1 million live births. Researchers estimate about 25,000 to 50,000 families in the U.S. are living with EB patients.

With the Attar family now in Denver, after moving north from Houston to find Brady the best possible care, researchers can learn from Brady and dozens of other families at the Children’s specialty clinic just how the rare disease shows up every day. Eileen would welcome the company – she absorbs information, encouragement and support from every possible source.

“When I think about it too much, it’s too daunting,” she said. “How is this sustainable? That’s when it really hit me. It’s bigger than me.” 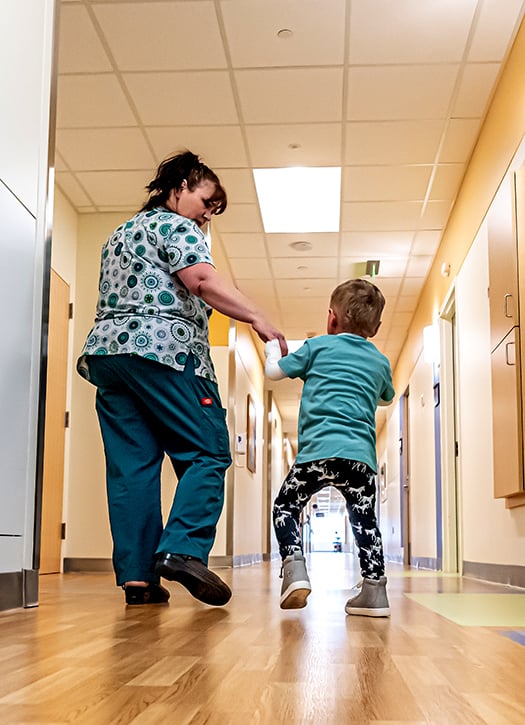 in between clinic exams.

EB is an inherited skin and soft-tissue disorder that causes blisters and peeled skin with even light touches. It also can create sores and scar tissue in the mouth, esophagus, lungs, muscles, eyes, nails and teeth. There are multiple forms of EB, and Brady has the most severe kind, dystrophic EB.

Straight from the womb, Brady was born with sores and abraded lips from kicking in-utero and from descending the birth canal. Children with severe cases need hours of bandaging and wound care each day, like severe burn victims, and everyday movement such as crawling or walking can cause pain and more damage.

Brady often has throat wounds and scarring that make him not want to swallow, and nearly all his feeding is done through a GI portal in his stomach. Eileen and Chris carry around a worn notebook full of reminders about his nutrition, his wound care, his medications and appointments. Kristina Byrne is a full-time RN who also accompanies Brady to school, and has become so embedded in the family she’s often told she can never quit.

Kristina touches Brady affectionately on the leg, and tells his Children’s Hospital medical team, “I hope his wife likes me,” waiting for them to get her joke about her serious commitment.

There is no current treatment or cure for EB, only attention to its symptoms. Research has focused on both external applications of materials that could restore skin cells, or injections of modified cells that might eventually override the patient’s damaged cells.

The Gates Center has grants to work in both areas and more. In its second 21st Century Cures Act award, the Center said “the funds will advance innovative Consortium research and expansion of treatment in areas including a potential “Spray- On SkinTM” application of regenerative cells, and a promising treatment of internal diseased tissue with systemically targeted-delivery cells.”

Spray-on delivery of new cells “has the potential to revolutionize treatment” for kids with EB, Roop said.

Still, even if proven successful, transforming significant portions of skin will be time-consuming. That’s why researchers also are zeroing in on internal delivery of modified cells that would travel through the blood stream to damaged cells and replace them.

“We’re going for the moon shot, we’re going for the complete cure,” Roop said. Moreover, knowledge gained in EB research has already and will continue to inform other medical disciplines – new methods of skin growth and targeted cell delivery could help millions.

Preparing for meetings with EB parents, Roop sometimes has to temper those words in his own head. “You realize you have to be very very cautious, and very realistic. The FDA is very cautious. And it always takes longer than the parents want,” Roop said. “We don’t know exactly what the timeline is going to be to get FDA approval. I’m an eternal optimist by nature, and I’m sure it shows when I start talking, and parents get excited.”

Human clinical trials of promising EB treatments are still some time away. The approval process may seem even slower than on other new drugs, as therapies that involve altering cells may need longer observation times to ensure there are no unwanted cell mutations.

At the Attars’ meeting with Gates researchers and their primary EB clinician, Dr. Bruckner, Chris Attar mentioned that at their last research update, they had looked into a microscope and watched altered healthy cells move in to replace damaged cells, a process called homing. He asked if that method was closer to approval.

‘We are in fact very optimistic about so many things.’

Bilousova responded, “We see cells going into the tissue, but it’s relatively few cells. So one ongoing issue is making the homing more efficient.” That will require complex production machinery to be set up in new Gates research laboratories in 2020. Researchers must avoid mistakes or rushing that can set back promising lines of investigation.

“If we don’t do it right, not only do we fail the patient, we fail the whole field,” she told the Attars.

Eileen and Chris understand all this, and accept it on one level, as supporters of science and research. On another level, where they are parents of a beautiful boy who loves Paw Patrol and wrestling his older brother, Leo, and the family jam sessions that erupt when Brady has his music therapy in the living room, they would do anything to lessen his daily agonies.

Around the conference table, Eileen said, “So much of hope depends on how Brady is doing day to day. On good days when he’s doing well, this all makes sense. And on days when things are not going well or something new has happened, it’s ‘We needed this yesterday already.’ ”

Roop listens and nods. These are the sorts of tensions and contradictions that flow constantly around the CU Anschutz Medical Campus, between the research towers and the clinics. The families inform and motivate and inspire the professionals.

“I see a parent like you and I have to try not to oversell it,” Roop said. “But we are in fact very optimistic about so many things.”

Photo at top: Chris Attar slips in a kiss while Brady distracts himself from daily care with a Paw Patrol episode.