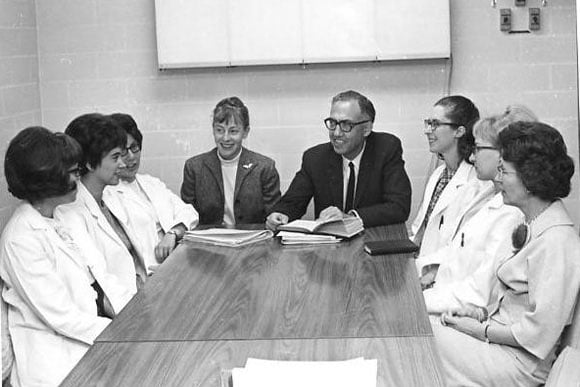 AURORA, Colo.—Nurture an idea with care and perseverance and there's no telling how it will flourish.

Fifty years ago, two professors at the then-University of Colorado Health Sciences Campus pioneered an idea for improved health care delivery to underserved communities. The educators, Loretta Ford and Henry Silver, called this new kind of nurse a "pediatric nurse practitioner." The profession has since blossomed and branched out to all corners of health care. In fact, according to Colorado Health Careers, nurse practitioner/clinical nurse specialist will be among the nation's 10 fastest-growing occupations in the next decade.

When CU's nurse practitioner (NP) program launched in 1965, Time Magazine dubbed the students a "new breed of nurse." Back then, nurse practitioners were on the front lines of health care in rural areas as well as gritty urban neighborhoods. They checked on babies' health and provided vaccinations, health counseling and other disease prevention services to far-flung and underserved communities that struggled to attract physicians.

"You were the lone ranger out there," Ford said. "You were the sanitarian, epidemiologist, the vital statistics office—everything. That was the basis for this (program). It was based on prevention and health promotion." 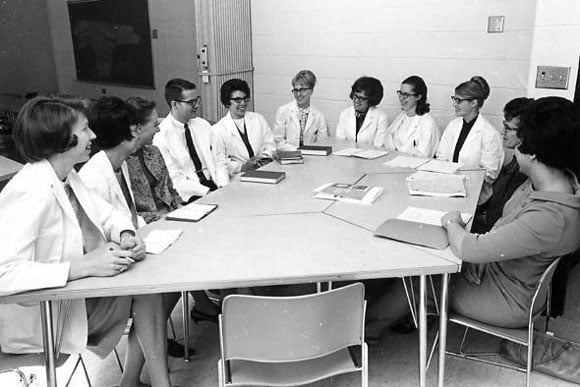 This is a photo of a nurse practitioner seminar class in 1966. Loretta Ford, EdD, FAAN, co-founder of the NP program, is seated second from the far right.

This is a photo of a nurse practitioner seminar class in 1966. Loretta Ford, EdD, FAAN, co-founder of the NP program, is seated second from the far right.

Advancing depth and breadth of care

Ford, EdD, FAAN, in the then-School of Nursing and Silver, MD, in the School of Medicine pushed for a vanguard nurse to fill a needed role in community health care. Ford had a background in community health and well-child orientation, while Silver's strength was in-depth clinical assessments and pediatric health. Their mentor at the time, Henry Kempe, MD, then-chairman of the CU School of Medicine's pediatrics department and pediatrics professor, saw complementary skill sets in the pair of educators, as well as strong determination that would be needed when resistance sprang up against their innovative idea to empower and expand the role of nurses.

"What we were doing mainly was advancing the public health nurses' depth and breadth in well-child care," Ford said. "We used to run well-baby clinics all over with combinations of physicians and nurses. It was obvious there were a lot of things that nurses could or would do, and it would be satisfactory for them to run these clinics by themselves. Quite wrongly, people said we got into (the NP program) because of a shortage of physicians. It was true we didn't have enough physicians to attend those clinics, but mainly because of the lack of physicians who were interested in working there."

CU's effort to extend and improve health care to all corners of Colorado got a big splash in summer 1966 when Time published a story about Susan Stearly, a graduate of our first-of-its-kind program, who was a smashing success in the small town of Trinidad as the nation's first nurse practitioner. "Sue did a tremendous job of demonstrating the model and then, of course, we began to take in classes of nurse practitioners," Ford said.

By 1973, more than 65 NP programs existed in the United States. Currently, according to the American Association of Nurse Practitioners, the nation boasts more than 192,000 NPs with specialties that include maternity, child health, geriatric, family, surgical, psychiatric and community nursing. Acute care nurse practitioner and NP roles dedicated to navigating the complex health care system are also in high demand. The College of Nursing (CON) offers multiple master's and certificate programs in nurse practitioner disciplines. Also in demand is the CON's MS-DNP program, which trains professionals interested in a practice-focused doctorate.

According to Ford, who now lives in Florida and still speaks at national and international NP conferences, the nurse practitioner idea faced resistance from nursing organizations and nurse educators, as well as some physicians. People felt threatened by the change, Ford said, particularly nursing faculty who at the time were mainly teachers and researchers. "This required faculty to be active practitioners, and a lot of them hadn't been in practice for a while," she said. "It was a difficult time."

The first nurse practitioner students in the nursing school, on the other hand, were enthusiastic about the change. Back then, when the program offered an NP certificate—CON began offering NP master's degrees in the 1980s—"it was kind of scary for the students to be taking on a new role, but they did beautifully and it paid off," Ford said. "They demonstrated very early on their competencies. Their strength and ability to tolerate the vicissitude of changes that were all around us were important. They were a special group." 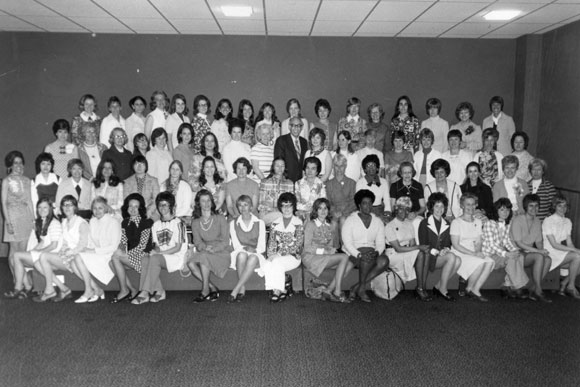 This is a photo of all of the CU nurse practitioner students in 1970.

In the mid-1960s, Judith Igoe was a public health graduate student at the University of Minnesota when she read the Time article about CU's ground-breaking NP program. Igoe had already put in a stint as a public health nurse in Iowa, so she knew how valuable nurses were to rural communities. She marveled at how Silver trained Stearly to diagnose and treat basic health issues as well as provide preventative care. "It was unbelievable, because the notion that anyone but MDs doing diagnosis and treatment was not something people thought was legal."

Igoe recalled how frustrating it had been to "trounce around Iowa cornfields" and tell farm families, who were too poor to afford care, that they needed to go to a physician in town for treatment. So Igoe came to CU and enrolled in one of the first NP classes, and she immediately took to the Socratic teaching method. "We'd go to class with Dr. Silver for several hours and ask him questions, and out of that they'd figure out what kind of additional clinical experience we'd need," she said. "Then we'd go to Denver General or other city hospitals and have mentors there."

Silver, who went on to serve as the medical school's longtime dean of admissions, died in 1991. Igoe, a College of Nursing professor emeritus, went on to help develop the college's school nurse practitioner program, teaching NP classes for 17 years before retiring in 2008.

Igoe recalls how some negative pockets of faculty "gave Ford ulcers" in the program's controversial early days. But yet, "here's where Silver and Ford excelled—the two of them are the most incredible ambassadors for new ideas that I have ever seen," Igoe said. "They helped get physicians and faculty to realize that this new role for nurses would be great."

Ann Smith, who earned an undergraduate degree at CU-Boulder, joined the very first NP class. Like Igoe, she had already served as a public health nurse, in rural New Jersey. While working in the field as an RN, she became fascinated by what was happening in nursing back in Colorado. "I was engrossed in the possibilities of what you could learn and what more you could do," she said. With Ford as her adviser and master's program teacher, Smith was assigned to the Stapleton Health Center, caring for inner-city patients while having clinical contacts with the then-School of Nursing. "We had a really good time practicing nursing. We were young and excited." 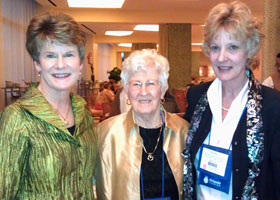 And they were excited to witness their place at the forefront of history. "People from all over the country were wanting to visit Ford and Silver and visit the (Stapleton) Health Center," she said. "We got the impression this was important .... but we didn't really know what a big splash this would be."

Smith joined the School of Nursing faculty from 1968 to 1972, then decided to return to CU-Boulder to earn a doctorate in sociology. In 1980, she returned as a College of Nursing faculty member and taught until her retirement in 1998. In the 1990s she helped other countries, including Britain and the Netherlands, to develop NP programs.

By the late '90s, Smith was gratified to see CON extend its NP training programs into Grand Junction, Durango and La Junta. "That was sort of like closing the circle. What we wanted to do was get nurse practitioners into areas that needed them," she said. "The students became advanced-practice nurses and stayed in the community."

'Equipped me as a nurse'

The quality and specialty areas offered in CON's NP program have improved over the years. After a long nursing career that has taken her around the world, DeAnn Lauer is in her last semester of a psychiatric-mental health NP master's program on the Anschutz Medical Campus. "It's an exciting program," Lauer said. "There are NP students from all over the state, as well as the region, who come to attend CU Anschutz. It says a lot about the program."

Lauer hopes to work in an outpatient clinic for children and adolescents, specifically in a school-behavior health role. For five years, she served in that capacity as a school nurse and then a case manager for behavioral health teams at Fort Carson in Colorado Springs. "I've seen the value of treating children in their natural environment in the school, and it also makes it very convenient for parents," she said. "Early intervention goes a long way in mental health. There are not enough providers, so I decided to continue my education."

Lauer said she wishes she had gone through the NP program 15 or 20 years ago, before she worked in West Africa and India. "I think it would have equipped me as a nurse in a better way."

She loves working with people and, despite the profession's challenges, would enter nursing all over again. "You don't skate through this NP program—it's really dedicating your life to it," Lauer said. "I encourage these nurses—'do not quit. You will use this for the rest of your life.'"

The quality of NPs, thanks to programs such as CON's and others, has increased—long putting to rest the concerns of doubters at the profession's outset. A 2010 study analyzed data from 26 research projects and found that the care of NPs was equal to the care by MDs. The research also found strong patient satisfaction and improved outcomes in follow-up care, screening, assessment and counseling.

'More proud to be a nurse than ever'

Karen Tyler, at right, recently graduated from CON with a master's in nursing, specializing as a pediatric nurse practitioner. She earned her bachelor's degree from Columbia University and worked in hospital nursing while raising her family. She's excited to start working again, hopefully playing a role in solving some of the persistent deficits in the nation's health care delivery system.

At CU Anschutz she's enjoyed access to Children's Hospital Colorado, one of the nation's top children's hospitals, as well as nationally-recognized professors "who are still at the table making the changes."

"One of the exciting things about this program is that I came in with one idea of what I might do, and I came out with 15," Tyler said. "I'm more proud to be a nurse than I ever was. It's a privilege to be part of one of the most trusted professions and do work that makes a difference."

Comments like these from current students are the greatest reward for the pioneer who started it all, and who watched her own "special group" blaze a trail. Ford will be honored this fall at a special NP 50th anniversary event hosted by the College of Nursing.

Ford has enjoyed talking with nurses and seeing their confidence grow along with the possibilities of their profession. "That's been the most satisfying thing—to see them as full-grown professionals in their own right," Ford said. "They're so happy about the role they're playing in patients' lives, and I'm struck by their courageousness in taking on new roles. It's been well worth the stress at the beginnings of it all."