A national study shows a 25% increase in the number of alcohol-related deaths in the United States from 2019 to 2020, with the biggest spikes among the 25 to 44 age group. April's National Donate Life Month brings light to the importance of organ transplants. With the surge in alcohol use, younger people are increasingly in need of liver transplants.

James Burton, MD, a transplant hepatologist, regularly sees the ravages caused by alcohol in patients. A decade ago, most severe alcohol-related liver cases were in older patients, but increasingly, and especially during the COVID-19 pandemic, Burton and his colleagues are treating younger patients.

His observations parallel a recent study by the National Institute on Alcohol Abuse and Alcoholism (NIAAA), which shows a 25% increase in the number of alcohol-related deaths in the United States from 2019 to 2020.

“Where we used to see older patients, it has shifted to people in their late 20s and early 30s who have severe alcohol-use disorders and have developed liver disease severe enough to warrant transplant,” said Burton, professor of medicine at the University of Colorado School of Medicine and medical director of liver transplantation at UCHealth University of Colorado Hospital. “Fifty percent of the transplants we did last year were on account of alcohol.”

Nationally, Burton said, about 40% of liver transplants are due to alcohol-related illness, and national data show a spike in liver transplant referrals after March 2020. The liver’s role in removing toxins from the blood makes it especially susceptible to alcohol damage.

“A decade ago, I never would have told you I had seen people like this,” he said. “We currently do about 12 or 13 transplant evaluations per week, and I would say 80% of them are alcohol-related.”

He added: “One could say there was an alcohol epidemic even before the pandemic. I think the pandemic just lit it on fire and everyone really saw the differences.”

While alcohol-related deaths increased at every age group and across ethnic groups, the NIAAA study showed, the biggest spikes occurred in the 25-34 (36% increase) and 35-44 (40% increase) age groups.

One of the societal responses in March 2020 – customers flooding liquor stores after initial announcements they would close during the lockdown – illustrated the nation’s drinking problem.

“I think the mental health issues in America parallel the use of alcohol,” Burton said. “When I saw people standing in blocks-long lines at liquor stores, I said to myself, ‘Wow, people consider that an essential thing.’ It just points to how big a role alcohol plays in our lives. Now we have seltzers with alcohol, craft distilleries, a variety of craft beers and some of these beers are 8% to 14% alcohol.”

Burton said he can often tell from the medical records of liver-disease referrals whether a patient has a problem with alcohol. “I’ll look through the chart and see no mention of whether the referring doctor even inquired about alcohol other than, ‘Do you drink?’ The first thing I do is ask, ‘What do you drink? How much do you drink?’ And they might say, ‘Oh, I drink wine.’ … some of these wine glasses fit an entire bottle.”

Hepatitis C used to be a leading indication for liver transplants, Burton said, but that changed about eight years ago when the Food and Drug Administration approved an oral treatment that effectively cured the chronic condition. Since 2014, there has been a steady rise in transplants for alcohol-related liver disease and non-alcohol associated fatty liver disease in the United States. The rates of both conditions ticked even higher after the onset of the pandemic.

Burton said about 10% of heavy drinkers – defined by the NIAAA as over 14 drinks a week for men and over seven drinks a week for women ­– develop severe liver disease. He tells patients who are getting a liver transplant because of an alcohol-use disorder that they need to remain sober for the rest of their lives. “Even going back to non-alcoholic beers, which can have a 0.5% alcohol content, can set off a cascade of drinking again,” he said.

Burton has seen cirrhosis patients in their early 20s, including one who presented with severe liver disease before she could legally drink. Another young patient had developed kidney failure as a consequence of liver disease.

“It’s a problem across the country, and there are areas where it’s certainly worse,” he said. “But I think it’s particularly worse among young women because women can’t drink as much as men. Also, there is a lot of advertising and social media alcohol promotion (directed toward women).”

Burton said women’s bodies contain proportionately less water and more fat than men’s bodies. Water dilutes alcohol and fat retains it. Women also have less alcohol dehydrogenase, an enzyme that breaks down alcohol. At any given dose, he said, blood-alcohol levels in a woman will be higher than a man even taking into account body weight.

Consumed above moderate levels, alcohol also impairs function of the pancreas, which secretes insulin and digestive enzymes, the gastrointestinal tract, the heart and the brain, Burton said. He doesn’t expect to see a decline in the current rates of alcohol-related liver disease.

“We’re starting to rethink how we deal with the problem,” he said. “If someone is sick enough to need a liver transplant from alcohol they undoubtably have an alcohol-use disorder, and often other psychiatric issues like anxiety and depression. As many people may be too sick to really be engaged in alcohol rehabilitation and do the work that needs to be done before transplant to maintain lifelong sobriety, we’ve had to develop pathways for patients to do this after transplant.

“We’re realizing we probably need to incorporate people who deal with addiction into our evaluation process – specialists in addiction medicine, addiction psychiatry,” he said.

Studies have shown that if a young person delays taking a first drink from age 16 to 20, the risk of developing an alcohol-use disorder can be cut in half.

Burton said, “We probably have to start educating kids in grade school about the impacts of alcohol so they have the tools to make good decisions.” He said primary physicians also need to do a better job of “pinning their patients down” on whether they have alcohol dependency problems.

“I just think it’s a major problem in America that we really have to start being very concerned about,” he said. 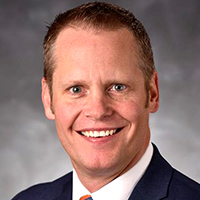