John Berdeaux came up with a simple solution to his complex dental problem: chew a Chiclet and put it where his front tooth should be.

He resorted to such a home remedy because he described every dental appointment over a 50-year span as “a terrifying experience.” The retired U.S. Marine would rather pull his teeth—which he’s done—than see a dentist. It worked for him until it didn’t.

“The aesthetics of missing teeth—I fought through that,” Berdeaux says. “But the effect it had on my physiology: I wasn’t operating at 100 percent and it took a toll on my body. Do you know how hard it is to chew lettuce without any back teeth?”

Berdeaux, who served a two-year tour of Vietnam, was referred to the University of Colorado School of Dental Medicine’s Heroes Clinic​, which provides free and discounted care to qualified veterans.

His fear of the dentist only lessened when he met Karl Hellwig, a fourth-year dental student and commissioned officer in the U.S. Air Force.

“Because of the camaraderie between military people, there is an inherent trust in him,” Berdeaux says. He became more comfortable after each appointment as Hellwig worked to improve his oral health.

“I love spending time up there (in the Heroes Clinic),” Hellwig says. “The patients are down-to-earth; they have more life experiences and they’re easy to relate to.”

Veteran Matthew Thompson receives care for a painful toothache at the Heroes Clinic. He calls the clinic a ‘godsend.’

The throbbing from his tooth was so intense that it gave Matthew Thompson a headache. Fixing it was going to cost $4,000, money the CU Denver psychology major didn’t have, so he attempted to sleep it off in the campus veterans’ office.

That’s when someone mentioned that Heidi Tyrrell from the University of Colorado School of Dental Medicine was there and could help the U.S. Air Force staff sergeant. The chance encounter led Thompson to the Heroes Clinic.

Before long, the student providers of the clinic, under close supervision from faculty, fixed not only the tooth that was bothering him but one of his front teeth.

“This is a godsend,” Thompson says.

Tyrrell was working with a group of researchers at Children’s Hospital of Colorado on a study examining the relationship between dental health and diabetes. Among the researchers was Dr. Lonnie Johnson, senior associate dean for clinics and professional practices. Johnson knew Tyrrell’s background of clinical work at Eastman Dental in New York and asked her if she’d consider running a new clinic the CU Dental was opening.

“I thought I was kind of done with dentistry,” Tyrrell says.  “But when Dr. Johnson said we’re going to provide care to veterans—I was all over it.”

Opened in 2014, the Heroes clinic was established with a grant from Delta Dental of Colorado to provide free and discounted care to student veterans and military personnel studying at CU’s Anschutz and Denver campuses.

“We know how negative an effect bad teeth can be on employment and how socially acceptable it is to have nice teeth,” she says.

Dr. Denise Kassebaum, greeting a veteran at the Heroes Clinic, has been supportive of the clinic's mission from the beginning.

From the beginning, Tyrrell says Dr. Denise Kassebaum, dean of CU Dental and the rest of the school’s leadership were extremely supportive of the clinic’s mission.

“Dr. Kassebaum told me to dream big,’” says Tyrrell, who knew there was a great need in the veteran community. “I told the dean that I don’t want to turn away any veteran who served honorably.”

“We’ve got these vets who have been walking around for decades with broken, abscess, infected teeth and literally chasing an infection at a time, one tooth at a time,” she says.

Over the years, Tyrrell has developed a special bond with the Heroes patients. Many of whom view their dental appointment as a visit with an old friend.

‘I can keep smiling’

Stuart “Boot” Gordon drives from his home in Silverthorne—80 miles away to see the student providers. 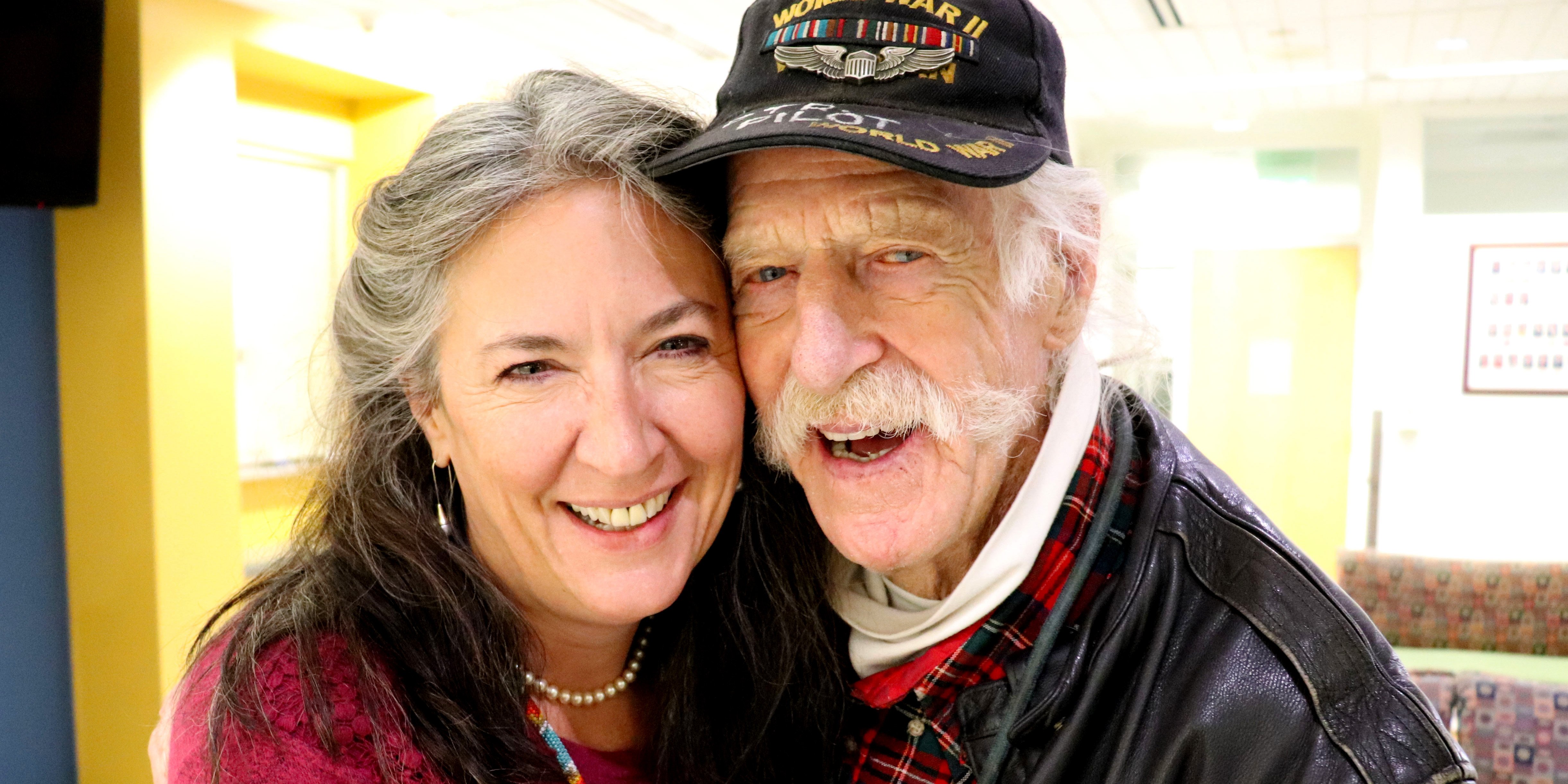 Stuart “Boot” Gordon gets a hug from Heidi Tyrrell, director of the Heroes Clinic.

“I don’t mind the drive because I’m an old fighter pilot, so I keep pretty good spacing,” says the 95-year-old Gordon, who served in both World War II and the Korean War.

He received his nickname, Boot, after a mishap during a training mission that forced him to bail out of his plane. A faulty parachute caused him to come within seconds of hitting the ground. When he was finally able to pull the chord, the force was so great that he ended up losing his boots. It’s those stories, which Tyrrell has heard dozens of times that makes her love her job.

“I believe very strongly in taking care of those who take care of us.”

Gordon received new upper and lower teeth. “Thanks to the School of Dental Medicine, I can keep smiling,” he says.

Now that the clinic serves an older population of veterans, the student providers can gain valuable clinical experience by performing procedures like removable prosthodontics, dentures and partials.

“It’s a place where our students can see a continuity of care because of the way we’ve structured the program, which is an amazing thing for them to see in dental school especially in their senior year,” Tyrrell says.

“We get them healthy; we get them whole; we replace any missing teeth—not just the aesthetics, but also functionally,” she says.

“It’s amazing. I watch those students and they are always, always taking notes and just making sure that they’re on top of things,” Rothberg says. “Their dedication to what they’re doing is fabulous and you see it all around you when you’re here.”

Rothberg is quite familiar with the art and science of dentistry—serving as a U.S. Naval dental hygienist while stationed in Hawaii in the late 1960s. “My main job was to make sure the sailors had clean teeth before they were shipped to Vietnam,” she says.

“If you have unhealthy teeth, you have infections, abscesses, you can’t deploy,” says Hellwig, who will serve as an Air Force dentist after he graduates in May 2020.

“I’ll be working in a ‘Heroes Clinic’ every day.”

The Heroes Clinic would not be possible without the generosity and support from our donors. Donate to the clinic online or contact Mary.Eisenstein@cuanschutz.edu with questions.