Researchers charted in real time how arctic ground squirrels are able to recycle cast-off amino acids into building-block proteins for muscles. The study has implications for treatments for the elderly and patients bedridden with long-term illness – and even astronauts on a journey to Mars.

Researchers peered into the deepest of slumbers – the barely-breathing sleep of arctic ground squirrels – to better understand how the small mammals can emerge from an eight-month hibernation with a minimal loss of muscle mass.

Using metabolite profiles in the squirrels’ blood, a recently developed technology, the researchers showed that the animals have uniquely adapted to their extreme habitats by converting bodily waste products into essential nutrients. Despite spending the long winter curled into a ball and breathing only once per minute, the hardy rodents awaken in spring unscathed.

The findings may have implications for improved treatments for the elderly and patients bedridden with long-term illness – and even astronauts on a nine-month journey to Mars. 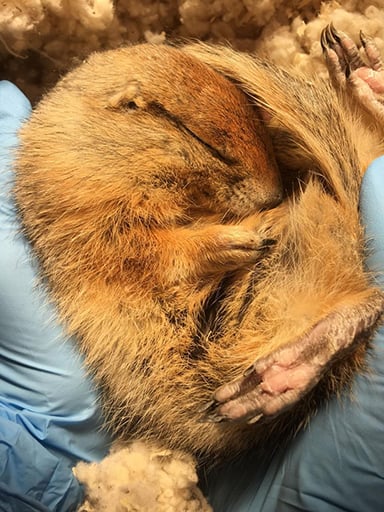 Angelo D’Alessandro, PhD, an associate professor and director of the Metabolomics Core of the University of Colorado School of Medicine, joined a team of University of Alaska Fairbanks researchers in the three-year study recently published in the journal Nature Metabolism.

The researchers posed the question: Can we learn something from nature to prevent muscle-wasting in humans, which can happen relatively quickly when a person is bedridden?

In humans, when muscle breaks down, the expelled amino acids metabolize into urea, a nitrogen-heavy substance that’s excreted through urine. “In the squirrels, we found that after they break down proteins from the muscle, they have some adaptations in part due to the microorganisms in their gut,” D’Alessandro said. “That adaptation takes the broken-down amino acids and converts them into building blocks that are needed to build proteins again – to rebuild muscle.”

Even if scientists were to replace the essential amino acids in bedridden or space-travel humans, the body would continue breaking them down into excess nitrogen, which can be toxic.

Much in the way D’Alessandro’s metabolomics team at CU Anschutz used mass spectrometry to analyze molecular signatures in the blood of Tour de France cyclists last summer, the squirrel researchers labeled compounds injected into the mammals to follow their metabolic activity. This allowed the researchers to directly trace the conversion of nitrogen in non-essential amino acids into nitrogen in essential amino acids.

“Previous studies made the assumption that this was happening, just because of a zero-sum game,” he said. “We saw that they become essential (amino acids) in real time, so that’s the unique novelty of this study. We directly tested that hypothesis."

This study involved about 70 of arctic ground squirrels. The research took three years because investigators traced different compounds through multiple cycles of hibernation. One of the compounds traced was a unique component that is cast off by the squirrels’ skeletal muscle.

“We showed that the component from the skeletal muscle was recycled into essential amino acids – and that was the final proof,” D’Alessandro said. “The squirrels can still recycle in a way that makes their wasting product not dangerous, but actually reusable to rebuild the muscle.”

This remarkable ability to recycle waste into usable nutrients ensures that the arctic ground squirrels will be at least partially to thank if new treatments emerge, for example, to help strengthen bedridden cancer patients or deep-space astronauts.

“It’s something we’d like to borrow from the squirrels,” D’Alessandro said.