Home News ‘It’s a New Me’: Amputee Steps Back Into Life with Restored Limb back to News

On a soft August day in 1992, Paul Nozell and his older brother, seated next to him in a single-prop airplane, surveyed the familiar landscape below. They planned to skirt the sky above their dad’s house in upstate New York. Nozell maneuvered the plane into a “lazy 8,” something he’d done many times.

Just then, everything changed.

As he banked his Taylorcraft, Nozell realized he was too low: not enough altitude to recover. The plane went into a nosedive and plunged into the ground at roughly a 45-degree angle. “I knew we were not going to be able to pull out,” he said. “The plane pretty much crushed around us.”

Watch this video to learn more about Dr. Jason Stoneback and his breakthrough osseointegration work.

The next thing he remembered was hearing the voice of his uncle, a doctor, who lived next door. Nozell’s body was battered and broken from his face down to his ankles, both of which were shattered, leaving compound fractures. His brother, who ended up with an amputated left leg below the knee, suffered a broken left arm and a shattered left ankle and femur.

From that day on, Nozell’s life became cloaked in a “great cloud” of pain.

So began his long road of physical therapy. Because he also sustained a crushed lumbar vertebrae L3, both of Nozell’s legs were paralyzed below the knees, leading to his decision, 20 years after the crash, to undergo surgery on his left leg. The 2012 amputation below the knee left him in a socket prosthetic, which in his home of Texas “was like wearing a wetsuit over your leg every day. You almost had to put an antiperspirant on to make it tolerable.”

He’d hoped the socket prosthetic would alleviate some of his chronic pain. But the cloud remained. He dealt with hotspots on his skin, unsteadiness while standing, and equipment cluttering his closet – urethane liner, sleeves and socks. 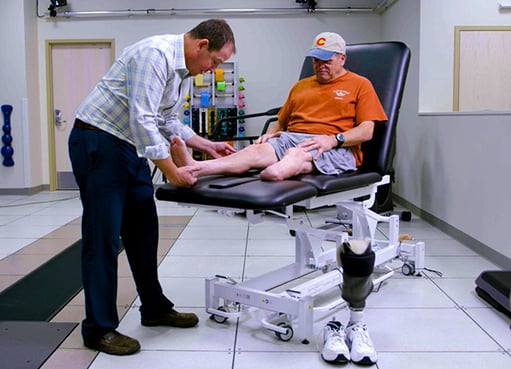 Paul Nozell gets examined by Guy Lev, PT, DPT, COMT, at the UCHealth Foot and

only two centers in the U.S. performing OI surgery on the tibia.

Nozell planned his days around how many steps he’d take, and whether he’d have to stand anywhere for long (places to sit were essential). He shied away from the most basic activities – such as playing with his five dogs or taking a walk with his wife. Skin irritation and open sores were common where his lower thigh met the socket.

About two years ago Nozell learned about osseointegration (OI) surgery. OI is a direct and functional connection between living bone and a load-carrying metal implant.

When he came across a magazine article about the procedure, he said, “it just lit a fire.”

A Facebook group for amputees led him to the Limb Restoration Program (LRP) at the University of Colorado School of Medicine and UCHealth. It is one of only two centers in the United States performing OI surgery on the tibia.

The program was founded in 2013 by Director Jason Stoneback, MD, chief of Orthopedic Trauma and Fracture Surgery at UCHealth University of Colorado Hospital (UCH), and one of the country’s foremost OI surgeons. Nozell was one of two tibia OI cases performed at the LRP; the other five involved femurs.

In spring 2019, 27 years after the plane crash, Nozell learned all about the procedure during a clinical visit with Stoneback and his team. In addition to surgery, the team is made up of rehabilitation physicians, physical therapists, prosthetists, nurses, nurse practitioners and athletic trainers.

After the OI surgery, Nozell meets with Dr. Jason Stoneback at the UCHealth Foot and Ankle Center in Stapleton.

“They’re all focused on the patient and making sure he or she has the most successful outcome,” Stoneback said.

During surgery on Nov. 4, a metal rod was inserted into Nozell’s tibia. Over the next four weeks, the bone fused into the porous implant, which includes a portion (the dual cone) that protrudes outside of the skin.

A prosthetic limb clicks into a connection device on the dual cone, making the prosthesis easy to take on and off. Because the prosthetic limb and metal fixture are integrated with the patient’s skeleton, patients gain “osseo-perception,” meaning they can feel vibrations and the ground – even surface textures. For instance, patients can feel pressure being applied to a car’s gas and brake pedals – out of the question with a socket prosthesis.

Stoneback has a keen appreciation for tactile function and pressure points. He rode bulls and saddle broncs as a college undergrad in Tennessee, learning that no sport engages all the senses – all at once in a blur of speed and chaos — quite like rodeo.

Lee Bernhardt, PT, DPT, watches as Nozell walks on his new prosthesis fitting at the UCHealth Foot and Ankle Center.

Before the press-fit prosthesis was attached, the 56-year-old Nozell, who has twin sons and two older stepsons, said the socket prosthesis was encumbering his life. An assistant Boy Scout master, but he couldn’t go exploring, and camping was difficult.

“I’d rather mow the lawn, work in my woodshop and be involved in Scouts, be on campouts and hikes,” he said. “It would be nice to realize that at the end of the day, I don’t have to take my leg off. This (an OI prosthesis) is going to prolong my quality of life.”

He returned to UCH on Dec. 2 for prosthesis fitting and the start of two weeks of physical therapy and rehabilitation. On Dec. 13, a radiant Nozell met with Stoneback in the UCHealth Foot and Ankle Center in Stapleton.

‘It’s about restoring a patient’s form and function.

It’s about restoring a patient back to their optimal self.’

“We’ve restored his limb,” Stoneback said. “He now has osseo-perception. We’re working on his gait mechanics – helping him to walk like he did before the amputation.”

As he walked steadily down a hallway – “it’s such a more fluid and secure step” – Nozell couldn’t stop smiling.

He was already anticipating spending the holidays back home with his family. “I’ve been sending pictures home, and I’m so excited to share this with them,” he said. “I’m really looking forward to being much more involved in activities and being up and around the house.”

Back into the cockpit?

Nozell felt the cloud of pain, his adult-life companion, finally lifting. He even pondered the possibility of flying – actually sitting in the cockpit – again.

“It used to be that putting each foot out was an act of faith; it was slip and slide,” he said. “Now it’s solid.”

Just a week from when he was to fly back to Dallas, Nozell was relishing the sense of solidity, purpose and, best of all, prospects that suddenly rushed back into his life. Not to mention the possibility of sleeping through the night with his prosthesis still on.

“It’s a new me,” he said with a smile the size of Texas. “I’m so excited to establish this as a new start to do more activities and to enjoy a more fulfilling life.”

Pushing the boundaries in Research

Already established as a leader in osseointegration surgery, the Limb Restoration Program (LRP) also has a research arm that is pushing the boundaries of best-possible care for patients with amputations and other complex orthopedic issues.

The neurologic interface involves hooking electrodes to the skin’s surface, or deep inside the limb, and powering them through signals from the brain. “The technology is here; now it’s about refining it,” Stoneback said. “Our lab is trying to figure out how to make that technology readily available to every amputee.”

The LRP lab is working on clinical trials in a number of areas – e.g. safety, materials, implants – to advance patient care. Much of the collaboration occurs with bioengineering colleagues at CU Anschutz, said Stoneback, who was chief resident in orthopedic surgery at CU Anschutz before returning to start the LRP in 2013.