Home News Making Science ‘Cool and Fun’ back to News

Francesca Manzella, MA, recalls the profound letdown. A high school guidance counselor said her dream of becoming a scientist was beyond her reach. “She discouraged the idea, saying I would be in school too long.” 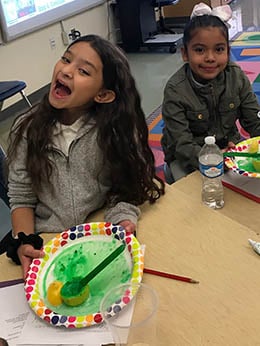 Fortunately, Manzella ignored the counselor and now is pursuing a PhD in neuroscience at the University of Colorado Anschutz Medical Campus. Moreover, Manzella is among more than 50 CU Anschutz graduate students who volunteer in the Think Like a Scientist (TLaS), an after-school program launched by Aimee Bernard, PhD, an assistant professor in the Department of Immunology and Microbiology at the CU School of Medicine.

Bernard’s mantra is that anyone can become a scientist. After all, she says, science should be accessible, fun and cool.

With the COVID-19 pandemic rocking our lives, science is in the spotlight perhaps like no other time in modern history. Increasingly, however, scientific “information” is filtering through the lens of social media and fake news.

Bernard said there are many misnomers about science, and “I think part of it just goes back to the way we’re taught. We think of it as memorizing a bunch of facts and terms,” she said. “We’re not taught to think through the process. What do scientists do? How did they get their data? How do they verify their information?”

All of that is on display in TLaS, which has become an after-school hit among fourth- and fifth-graders at Elkhart Elementary School, just minutes from CU Anschutz in Aurora. TLaS has offered several eight-week sessions, each time enrolling a full-capacity 20 students.

The first three sessions were for girls, and the fourth was geared toward boys. Elkhart has a very diverse student population, and 94% of its students are eligible for free and reduced lunch. There is no budget for after-school programs.

The Title I school is focused on improving students’ reading, writing and math, so science has been cut from the curriculum. Bernard received a grant from the Office of Diversity and Inclusion at the CU School of Medicine to offer TLaS for free.

“As a full-time faculty, I don’t really have the bandwidth to take on an all-volunteer after-school program,” said Bernard, who co-developed the kid-friendly science modules with a graduate student. “If I won the lottery, this is what I would do full time (laughs). But I don’t buy tickets.”

Each TLaS program ends with students showcasing their scientific projects at a poster session attended by parents, teachers and classmates. “We’ve had so much good feedback from the parents,” Bernard said. “One mom came up and told me that Wednesday was the only day that her daughter talked about school. It’s because she talked about science class.”

Bernard has taught the full spectrum of students – from graduate students down to elementary – and she considers the latter the most challenging due to shorter attention spans. So every class involves a hands-on experiment – lemon volcanoes are popular – with plenty of time for questions.

And the queries from the kids are often doozies, according to Bernard. “Nothing is too embarrassing,” she said with a laugh.

Seeing themselves as scientists

At the root of each lesson is the importance of reaching evidence-based decisions. “We want them to understand you use science to inform what you do on a daily basis,” Bernard said. “We’re trying to engage students who don’t see themselves represented as frequently in science or medicine. We want them to know they can become scientists, doctors, nurses and healthcare professionals.

“And a lot of the student volunteers – not all, but a good portion – are not white. So the Elkhart kids are seeing people like themselves telling them, ‘I am a scientist.’”

Haider Manzer, a CU Anschutz doctoral candidate and volunteer, helps a student with a science lesson during a Think Like a Scientist class.

Haider Manzer, a doctoral candidate in the Department of Immunology and Microbiology, recalls a volunteer moment when a girl shyly said she never thought she could become a scientist. “But after hearing and seeing all of you, I think I want to be a scientist when I grow up, too,” she said.

The CU Anschutz graduate students relish the chance to get teaching experience through STEM-related outreach such as TLaS. It’s not uncommon for a dozen volunteers to show up at Elkhart.

In their own studies, Manzer said, graduate students are focused on asking important questions and conducting experiments to answer those questions. He noted that being a good scientist extends to spreading the value of your work to the wider community. “A good scientist should be able to share their research findings with the general public, and also use their knowledge and love of science to enrich the education of those beyond the walls of their institutions,” he said.

TLaS is yet another way CU Anschutz enriches our surrounding community, and with the program becoming a nonprofit, it will be able to accept tax-deductible donations and continue to grow. Bernard hopes the program moves into more schools. For now, because Aurora Public Schools are teaching online this fall, TLaS is on hold for in-person classes.

Giving back, training the next generation

The CU Anschutz group is looking into making short YouTube videos explaining how to do experiments. TLaS also hopes to distribute do-it-yourself science kits to schools.

Until the graduate students can resume TLaS, Manzella will savor the memories of hearing a girl’s giggles while performing an experiment, or seeing a boy beam with pride in front of his poster.

“A good scientist isn’t afraid to question the status quo. They are always learning,” she said. “I saw a lot of those personality traits in the kids. If we do our part as a society, we can help train the next generations of researchers.”