A year ago, when Colorado was getting pummeled by usual March snowstorms – not a pandemic – Nancy White strolled out on a rare warm day to do some yard work. Leaves bagged, she went back inside and faintly touched her side.

She suddenly seized up in pain. Strange. She hadn’t bumped her hip while outside, she thought.

The next day, her primary care physician sent her to a hospital in Lafayette for a CT scan and blood test. A shocking result: a 5-centimeter tumor in the center of her pancreas. It was entangled with three blood vessels.

The tumor had cut off the flow of bile from her gall bladder, which was extremely distended. A pancreatic cancer diagnosis is frightening enough, and Nancy had one of the worst-possible tumors.

Six months of chemotherapy followed, and a post-regimen CT scan showed no active cancer, but the tumor mass was still present. Nancy asked the surgeon about what to do next.

Not fully comfortable with the response, Nancy’s husband, Al, asked for a second opinion at the University of Colorado Cancer Center. It was most likely a lifesaving move. 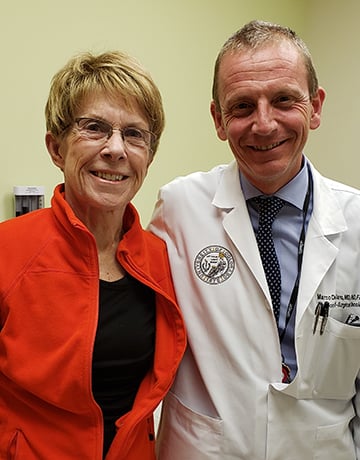 Their surgeon, Marco Del Chiaro, MD, is a CU Cancer Center investigator, professor and chief of the Division of Surgical Oncology at the CU School of Medicine. Del Chiaro, a native of Italy, is one of the few surgeons in the United States who specializes in the kind of surgery it would require to remove Nancy’s tumor.

In a matter of days, Nancy and Al were chatting with a battery of experts on the center’s multidisciplinary team. They learned the CU Cancer Center, recently named a National Pancreas Foundation Center of Excellence for pancreatic cancer, is able to operate on almost 30 percent of pancreatic cancer patients, nearly double the national average.

Similar situations play out frequently around the world, according to Del Chiaro. Patients with complicated pancreatic cancer are told their tumors are inoperable, or that the best that can be done is an exploratory surgery. “Here, in well-selected cases, we can often make them resectable,” he said. “It makes the chance of survival much higher.”

Importance of a second opinion

He added that he frequently uses the hashtag #askasecondopinion on his Twitter account. “I even encourage patients, who may not be sure what to do after a consultation with me, to ask for a second opinion,” Del Chiaro said. “This is a cultural shift that needs to be done: Before you give up, it’s always good to get a second opinion.”

“We didn’t have a choice; we just had to go on,” Nancy said of the extreme grief her family endured over the past year. Adding to the pain, Al’s sister died the night before Nancy’s surgery. “My husband has been absolutely incredible through this,” she said. “I don’t know how anyone could do this alone.”

‘Our 50th wedding anniversary will be in June. That's

my immediate goal, but I'm hoping for a lot longer.

All possible because of a second opinion.’

The couple said their other two children – a son who lives in Denver and a daughter in Oslo, Norway, as well as their son- and daughter-in-law and a host of generous friends – have been an invaluable support throughout the ordeal.

The surgery took place on Dec. 2, 2019. But before wheeling Nancy into the operating room, Del Chiaro made sure she understood the potential consequences – the fact that she’d quite possibly end up with type 1 diabetes and other health impacts.

“We need to be honest when we’re talking with the patient, and let them decide what they want,” Del Chiaro said. Nancy elected to go ahead, and she was in surgery for over 10 hours.

Del Chiaro performed, as Nancy likes to describe it, “quilt work” on the three troublesome blood vessels. To remove her pancreas, he had to cut the vessels and then stitch them back together. Much more happened, of course. Three-fifths of her stomach was removed, as was her gall bladder, spleen and 58 lymph nodes. 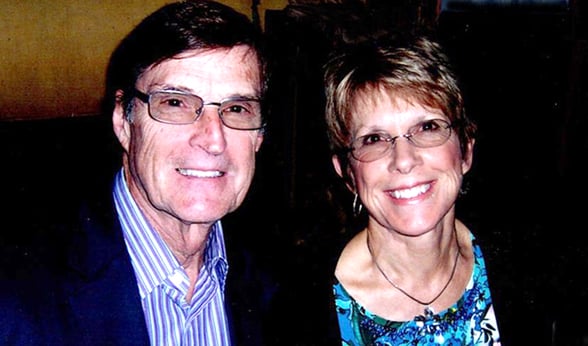 The recovery has been challenging, to say the least. Nancy had a Chyle leak, a leak of the lymphatic system, forcing her to wear drains outside her body for a while.

Every time Nancy eats anything with fat – guacamole and chocolate are two favorites – she has to first swallow an enzyme pill. “I have to try every new food in small amounts, and I never know how it’s going to go,” she said.

“Through it all, Dr. Del Chiaro has been my cheerleader,” Nancy said. “He has encouraged me by reminding me that I’m one of a small percentage of people who have had the opportunity for this type of surgery, and that I’m improving and that life will be better in a few months.”

Nancy, who is 73, has shown a “very strong response” to the surgery, Del Chiaro said. “The margins from surgery are negative, and the tumor showed an evident pathological regression in the microscope. It’s the best starting point to have an improved survival. She has one of the highest possibilities to get good results.”

Nancy is still flabbergasted about the initial diagnosis. Her mother, grandmother and an uncle died of different types of cancer, but she had always taken the proper healthful precautions – smart diet, non-smoker, regular exercise. “So it feels extremely unfair,” she said.

Despite all the adversity and challenges, she remains active. Up until the coronavirus pandemic, Nancy enjoyed gatherings with friends, ballroom dancing, going to the theater and participating in continuing-ed classes. She relishes the occasional decadent meal.

“I had lobster and melted butter on Valentine’s Day,” she said with a chuckle. “So all is not lost.

“I’m living from one quarter of a year to the next. Our 50th wedding anniversary will be in June, and I’m going to be around for that,” she said. “That’s my immediate goal, but I’m hoping for a lot longer. All possible because of a second opinion.”