The potential for a challenging respiratory-viral season looms large for healthcare providers already drained by a months’-long COVID-19 battle. Yet evidence suggests pandemic safety protocols and flu vaccination rates could help ward off a powerful double blow this winter.

Providers battered by the biggest pandemic of their lifetimes face a new uncertainty in the next few weeks. As COVID-19 swirls around them, again taxing clinics and hospitals across the country with its biggest upsurge yet, flu season threatens to make its annual debut at any time.

Will the two viruses combine for an explosive sick season? Or will the tactics put in place to tame SARS-CoV-2 send the influenza virus packing? According to Suchitra Rao, MD, a pediatric infectious disease expert at the University of Colorado School of Medicine, it’s difficult to predict. 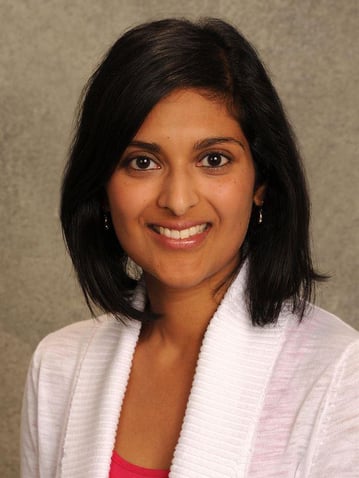 “This is something that I say a lot: The only thing predictable about the influenza season is its unpredictability,” Rao told a virtual audience tuning in on Nov. 9 for “COVID-19 vs. Influenza,” part of a webinar series co-sponsored by the Colorado School of Public Health (ColoradoSPH). Rao, who has been researching influenza for over a decade, offered her insights on a possible “twindemic.”

“I think there is certainly a potential to have a severe respiratory season,” said Rao, whose influenza-research focus was inspired by caring for severely sick children during the 2009 H1N1 pandemic. “One of the most important factors is really going to be the extent of the social-distancing measures that are going to be in place.”

Every year, public health experts monitor flu seasons in the Southern Hemisphere in preparation for its appearance in the United States. In 2020, cases began their gradual increase as usual, but then had a stark and unusual decline when COVID-19 struck. “There was a complete flat-lining of cases,” Rao said, sharing a graph of flu activity in her native Australia.

“It’s important to keep in mind that the mitigation strategies that they have been using over there have been a lot more stringent than what we have been seeing here,” Rao said. Nonetheless, she added: “If we do have a further tightening of social-distancing measures, then this has the potential to flatten both the SARS-CoV-2 curve as well as the influenza curve.”

Last year, influenza sickened as many as 56 million Americans and took as many as 62,000 lives, according to the Centers for Disease Control and Prevention (CDC). Since it began, the COVID-19 pandemic has struck 11 million Americans and taken over 245,000 lives. The CDC estimates that COVID-19 is at least five to seven times deadlier than the flu.

Providers particularly worry about patients contracting both viruses at once. “You can absolutely have both at the same time,” Rao said, citing an early study out of China of a group of patients struck simultaneously by flu and SARS-CoV-2. “It appeared these folks ended up being sicker for longer and had worse outcomes.”

With the healthcare system already overwhelmed, experts also worry about both viruses peaking concurrently. In past weeks, COVID-19 has been on a relentless climb across the country, surpassing rates seen during its initial surge.

Based upon the last five seasons, U.S. flu season averages about 16 weeks, generally peaking between December and February, Rao said. “But we have seasons that start as early as November and go through May.”

Symptom similarity with influenza and COVID-19 can also burden the healthcare system, requiring testing for diagnoses, and causing anxiety in patients. “Unfortunately, there’s really no good way of distinguishing the two,” Rao said, noting that even the loss of taste and smell that strikes some COVID-19 patients can occur with the flu.

How many Americans are immunized for the flu, and how well the season’s influenza vaccine works, could also be critical factors, Rao said. On average, effectiveness of the flu vaccine ranges from 40% to 60%, she said.

“If we do have a further tightening of social-distancing measures, then this has the potential

to flatten both the SARS-CoV-2 curve as well as the influenza curve.” – Suchitra Rao, MD

“The flu vaccine is not necessarily going to be able to prevent you from getting the flu, like the measles vaccine prevents measles, but what it can do is prevent you from getting very sick from the flu.” That’s an important benefit both for the patient and the healthcare system, as it reduces hospitalizations and office visits – particularly crucial during a pandemic.

Last year, with 52% of Americans 6 months and older receiving a flu shot, the CDC estimated the vaccinated population reduced U.S. illnesses by 7.5 million. That, in turn, prevented 105,000 hospitalizations and 6,300 deaths, the CDC estimated. “That’s 17 lives a day over the course of a year,” Rao said.

The webinar included a look back at lessons from other pandemics and infectious-disease outbreaks by Jon Andrus, MD, adjunct professor and director of Division of Vaccines and Immunization at the ColoradoSPH. The importance of disease surveillance, attacks on outbreaks at the source and strategic use of vaccinations were chief among the lessons critical for today, Andrus said.

A question-and-answer session followed the presentations. The series is a collaboration with the Institute for Science & Policy and the Denver Museum of Nature & Science. View the full webinar below.