U.S. Rep. Jason Crow (D-Colo.) learned about the groundbreaking care being provided by the CU School of Dental Medicine’s Heroes Clinic, a national model of free and reduced-cost dental care for veterans, during a quick visit before returning to Washington, D.C.

Joining the congressman for a roundtable talk on Friday were:

Crow, a former Army Ranger, emphasized his commitment to serving veterans. He noted that of the roughly 460,000 veterans living in Colorado, more than 60,000 make their homes in the 6th Congressional District, which includes all of Aurora and much of the metro-Denver area. “We’ve made a big commitment of having dedicated staff for this,” said the freshman congressman, who was joined by veterans Terrell Horton and Emily Amador, whose duties on Crow’s staff include veteran constituents’ issues. “We want to learn as much as we can so Emily and Terrell know these resources are available (at CU Anschutz) and can refer cases and constituents.”

‘Call to serve the military’

Elliman said the CU Anschutz Medical Campus, which itself is a former Army base, has a “heightened call to serve the military in all of our operations. Last year, the Heroes Clinic served veterans from 32 counties in Colorado, so it’s a big deal, and we take it seriously.”

Kassebaum gave Crow’s team an overview of the Heroes Clinic, which started in 2014 and provided a variety of preventive and comprehensive care. Under faculty and staff supervision, senior dental students offer all services. The clinic was launched for veteran students at CU Anschutz and CU Denver, but soon expanded to serving veterans at the Boulder and Colorado Springs campuses as well as those enrolled at Metropolitan State University, the Community College of Aurora, the Community College of Denver and Emily Griffith Technical School.

Delta Dental of Colorado has been a critical partner with the School of Dental Medicine, providing two grants of $1 million each. The public-private partnership has allowed the Heroes Clinic to branch out, and it now offers multiple pathways to provide free and reduced-cost dental services to veterans across the spectrum. A breakdown:

Tyrrell said the Heroes Clinic is “changing lives” for veterans who served in every era and every war of the past century. But it takes resources to maintain the services. 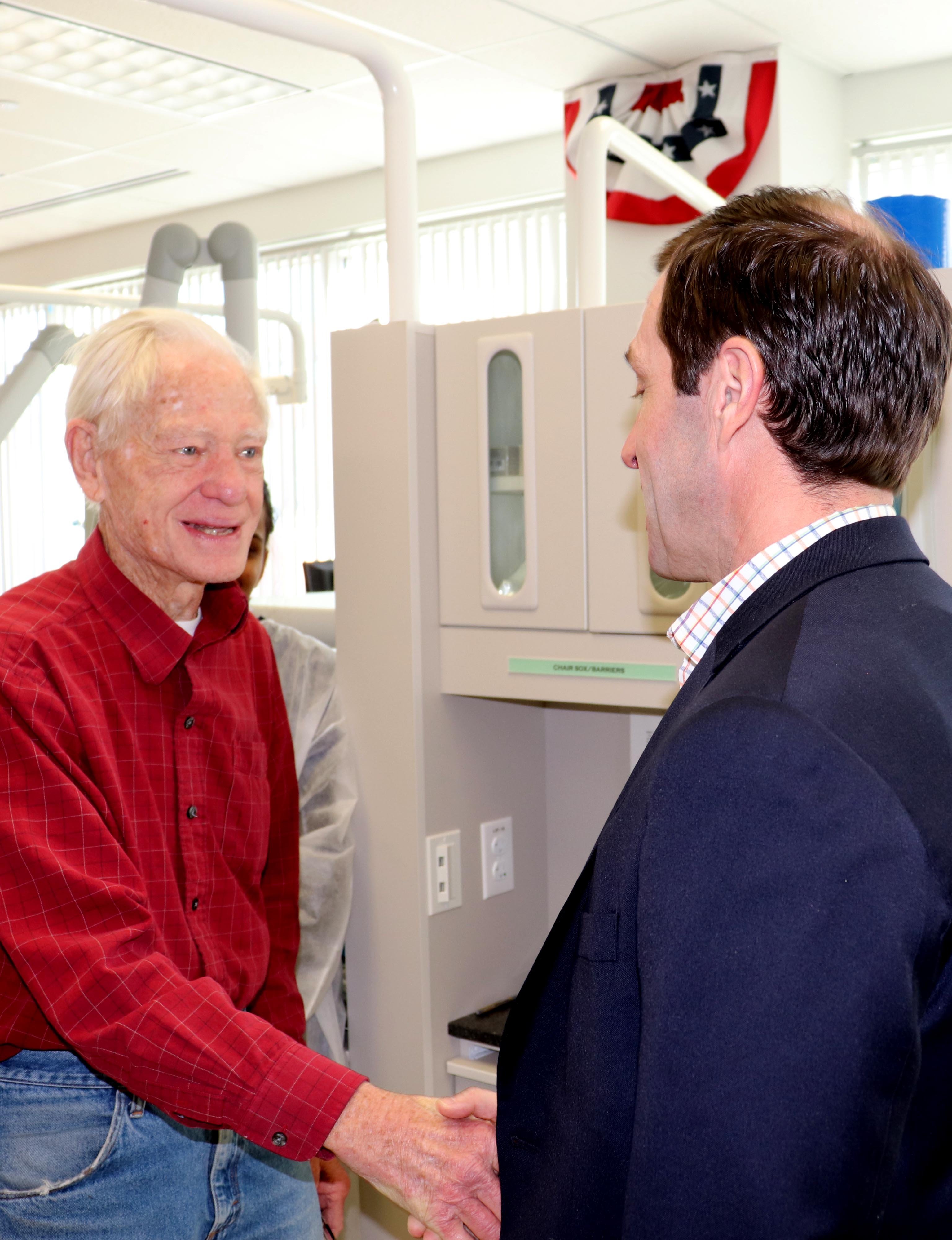 She noted that one of the clinic’s programs, Pathway 3, which provides a 30% discount on the first $5,000 of care for qualifying veterans, had to be cut in October due to expired funding. The clinic is working to raise more money to restore the service.

“I can’t impress upon you enough how important funding is – and not just for our clinic,” Tyrrell said. “We’ve got the model, and I hope we’re able to spread it to dental schools across the country. It’s a win for our students – not just Karl, who is a veteran – but other students who learn empathy. They see the hidden disabilities veterans deal with, and they carry that into their own practices.

“The ripple effect is a big part of this clinic,” she added. “It creates awareness.”

Bailey, who is former Assistant Surgeon General of the U.S. Public Health Service Commissioned Corps., said veterans of all ages had given the care provided by the Heroes Clinic very high ratings.

“We’re proud of the Heroes Clinic and wish that it could reach more people, and we’re especially proud of your commitment to veterans and hope that more can be done,” he told Crow. “Improving oral health improves overall health. It’s really important.”

Hellwig, the fourth-year dental student who is a commissioned officer in the Air Force, said the clinic, “more than anything is a gateway for (dental school) students to realize that there is a need for the veteran population.”

Hellwig shared stories of caring for veteran patients who had delayed oral health care for many years. One Marine had even gone so far as to extract his bad tooth with a pair of pliers and multiple swigs off a bottle of whiskey. In addition to dental issues, many veterans are dealing with PTSD and myriad other physical and mental health issues. Quite often, they are living on a fixed income.

“The more we can do (for veterans), the better,” Hellwig said.

Crow concluded his visit with a tour of the Heroes Clinic, chatting with providers and patients, including Richard Keller, a 91-year-old WWII veteran who was getting a checkup.