Research out of the University of Colorado School of Medicine could pave the way for preventive treatments for dementia-causing small vessel disease.

Using a grainy, black-and-white video image of a mouse brain, Fabrice Dabertrand, PhD, demonstrates how a disease responsible for upwards of 40% of all dementia cases today steals the brain’s ability to nourish cells by halting vessel dilation.

In the video, researchers attempt to stimulate a natural mechanism called functional hyperemia to dilate the rodent’s tiny arteriole by administering a solution with potassium (which plays a key role in vasodilation).

Next, a phospholipid called PIP2 is added to the wash and administered via a miniature pipette.

“And boom! Stimulation and dilation,” Dabertrand said, as the arteriole in the video instantly begins dilating, returning the blood flow to normal within 15 minutes. “It’s spectacular.”

The research has generated interest in the scientific world, with this latest study published recently in the Proceedings of the National Academy of Sciences (PNAS). The discovery could result in a first-of-its-kind therapeutic drug capable of slowing or halting the debilitation caused by small vessel disease (SVD).

“Small vessel disease is really an umbrella term that covers a large family of pathologies,” said Dabertrand, an associate professor with appointments in anesthesiology and pharmacology at the University of Colorado Anschutz Medical Campus. SVD drivers include genetic, environmental and lifestyle factors, ranging from mutations and smoking to hypertension and aging.

Scientists have known the vascular disorder begins with the loss of functional hyperemia, the brain’s natural response to rapidly redirect blood flow to brain regions with higher metabolic activity.

“I’m sure you’ve seen these images where they ask people to think about their mom or whatever and they say, ‘Oh, look at this region. It lights up,’” Dabertrand said to illustrate the process. “So, you have to dilate the arterioles to bring oxygen and glucose to let the brain work.” 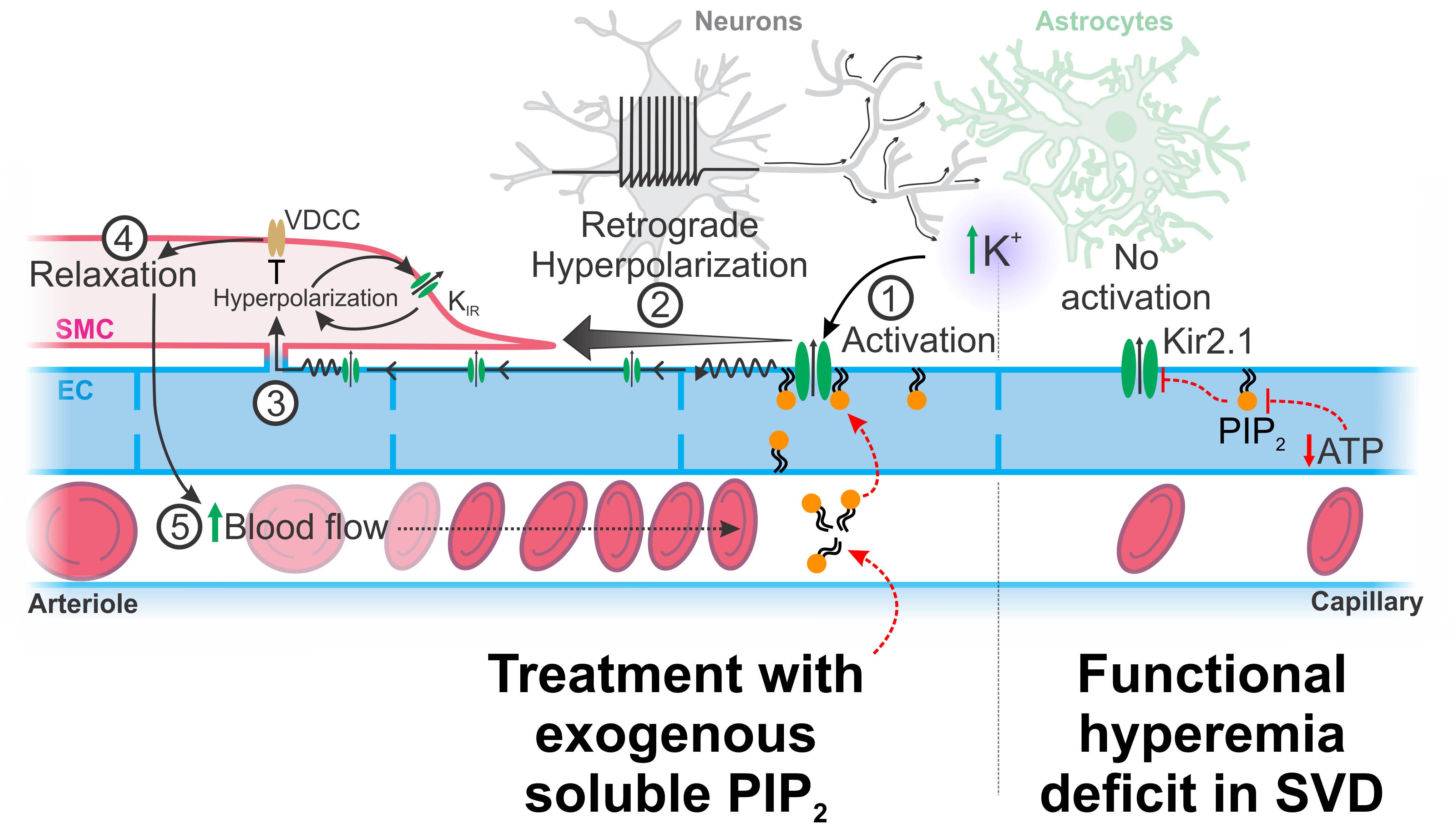 The functional hyperemia deficit can be found as early as 20 years before any signs of cognitive decline arise in patients with SVD, which also accounts for more than 25% of all ischemic strokes. “We think it is a very important part of the disease.”

Scientists define the brain’s ability to tell the arteriole to dilate in response to a neural activity as neurovascular coupling. “There are many different mechanisms behind that, but we determined the molecular defect at play in capillary endothelial cells,” Dabertrand said.

Using a mouse model of a dominant hereditary form of SVD, Dabertrand and colleagues, including from his former lab at the University of Vermont, found that SVD is associated with reduced synthesis of the phospholipid PIP2. They further linked diminished channel activity of the capillary endothelial cell strong inward-rectifier K+ channel Kir2.1 to the reduced PIP2 synthesis.

“That lack of the PIP2 blocks the communication within this sort of sensory web in the brain, preventing the Kir2.1 channel from sensing neuronal activity and translating into local vasodilation,” Dabertrand said.

More strikingly, the researchers succeeded in reversing the defect by resupplying PIP2 in the mouse model.

“Dabertrand et al. demonstrate the molecular basis for the loss of functional hyperemia for a particular SVD and, impressively, show how the dysfunction may be reversed. The findings … may set the stage for the development of treatments for impaired neurovascular coupling and dementias associated with cerebral SVDs.”

Although the mouse model was based on a genetic form of SVD, preliminary evidence suggests it can also serve as model for the more common sporadic forms of the disease, Dabertrand said. His Vermont colleagues also found a positive PIP2 effect in an Alzheimer’s mouse model.

“People are really enthusiastic about this. There is very interesting therapeutic potential not only for the SVD patient, but also in all pathological setups of the brain where perfusion is compromised and where metabolism is compromised,” Dabertrand said. “It really offers a lens to study a large group of brain vascular diseases.”