Eddie Van Halen, namesake with his brother of the famed ‘80s rock band Van Halen, died Oct. 6 from cancer that began in his tongue. As always, prevention and early detection are key, and tobacco and alcohol play a chief role in most head and neck cancers. At the CU Cancer Center, researchers continue to strive for better treatment, improving patient care in the process.

In a 1983 concert video, guitar legend Eddie Van Halen abandons his pick as he sets the stage for his famous "Eruption" solo. After popping the pick into his mouth and tucking a cigarette into the top strings of his guitar, the well-loved musician’s fingers fly across his instrument’s neck, a trail of smoke rising from it with every wailing note. 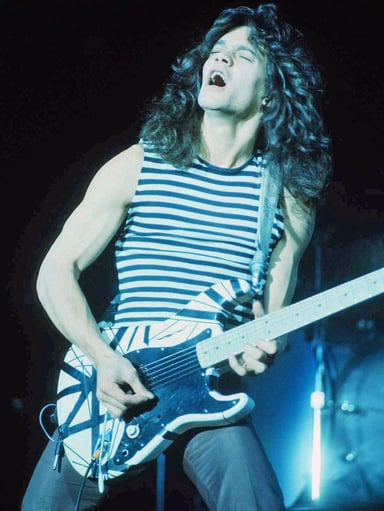 His cigarette, as ever-present as his stage-side booze-filled cup and ear-to-ear grin, represented the star's early party-packed lifestyle – a way of life shared by many rock musicians of that era. Van Halen died Oct. 6 at age 65, after a 20-year battle with head and neck cancer. He joins a long list of rock musicians gone too soon, often from risk factors associated with life on the road.

Although she’s never treated anyone as famous as the Rock & Roll Hall of Famer, Jessica McDermott, MD, a specialist with the University of Colorado Cancer Center, has cared for her share of musicians with head and neck cancers. Frequently affecting the tongue, throat and larynx (voice box), the cancer’s treatment can be particularly devastating for people with a music passion.

“It’s a pretty traumatic experience, especially for people using their voice as a primary part of their identity or their job,” said McDermott, assistant professor of medical oncology in the CU School of Medicine. “We could be removing parts of their tongue (as in Van Halen’s case) or their voice box.” Radiation and chemotherapy can cause scarring in the mouth and ringing in the ears. “If you are a musician, that can really affect your job.”

Tobacco and alcohol cause nearly 75% of all head and neck cancers, according to the National Cancer Institute (NCI). In combination, they are doubly dangerous, said Sana Karam, MD, PhD, an associate professor and physician researcher and radiation oncologist with the CU Cancer Center, the state’s only NCI-designated cancer center.

“Alcohol actually acts as a solvent for the carcinogens in cigarette smoke, so it has a synergistic effect,” Karam said. “I can’t emphasize enough how important it is to invest in smoking (and chewing) cessation and counseling on drinking.”

Another driver, the sexually transmitted human papillomavirus (HPV), can also be a risk factor associated with the stereotypical rock-‘n’-roll lifestyle, McDermott said. “And it is rapidly increasing,” she said of the virus that causes head and neck cancers most often in men and cervical cancer in women. “So that’s something that we are seeing a lot.”

HPV-driven head and neck cancers generally respond well to therapy, unless they are combined with heavy drinking and/or tobacco use. Then prognoses plummet, McDermott said.

HPV vaccines can reduce the risk and are recommended for all boys and girls between ages 9 and 12. Catch-up vaccines can be offered through age 26, according to American Cancer Society (ACS) recommendations. A 2019 Advisory Committee on Immunization Practices pushed the age to 45 for HPV vaccine counseling for some men.

“I hope that primary care providers are counseling their patients about it,” Karam said. “If you look at the incidence of cervical cancer for women, it has dropped significantly with the vaccine.”

One study using Centers for Disease Control and Prevention data found cervical precancer rates caused by the immunization-covered HPV types fell from 55.2% to 33.3% in vaccinated women. “My hope is that we can do the same thing for our boys and for our men,” Karam said.

Karam and McDermott work together on the CU Anschutz Medical Campus in the search for more effective, less invasive head and neck cancer treatments, leading numerous clinical trials. CU Cancer Center patients benefit from their studies, some of which are aimed at preventing the metastasis and recurrence that plagued Van Halen.

“We do that by adding different drugs at times, such as immunotherapy with radiation prior to surgery or adding targeted therapy to our current standards of radiation and chemotherapy,” McDermott said. “We are having some really good responses in folks, which allows for more effective and better tolerated therapy both in the short and long run.”

Karam’s lab seeks to understand why some patients do poorly, despite aggressive treatment and disfiguring surgeries. “We are trying to understand the biology driving that and how we can use radiation and immunotherapy together to kind of start the fire before they do the surgery, awakening the immune system so the body can attack it for a better response.”

The School of Medicine’s Colorado Center for Personalized Medicine recently partnered with Summit Biolabs, Inc., which makes saliva-based tests for head and neck cancers. Detected early, survival rates are much higher. For instance, the five-year survival rate for tongue cancer drops from 81% to 39% when it spreads to distant organs (American Cancer Society).

The researchers also hope to alleviate their patients’ pain and irritation from radiation and chemotherapy. “That’s a big issue with folks. It makes it difficult for them to eat, and they have to be on pain medications,” said McDermott, principal investigator of a trial looking at a natural antioxidant called alpha lipoic acid in reducing the pain. “It’s very early on, but so far people have tolerated it well. It seems like it should have some effectiveness.”

Understanding the mechanism is critical, Karam said. “Until we can develop specific targets, we will not be able to overcome the disease. What my lab is trying to do is move beyond regression to eradication at a low-toxicity burden, without having to put a patient through weeks of chemotherapy and radiation and surgery. It’s just heartbreaking to see what our patients go through, and I’m optimistic that we can do better for them within the next few years.”