Mario Hernandez embarked on the path to medicine by accidentally stabbing his leg with a yard aerating tool when he was 9. He still remembers the wound bleeding everywhere and being aware he needed to go to the hospital.

He especially recalls the look of fear on his parents’ faces.

Both parents were undocumented immigrants, and Hernandez knew they were afraid they would get deported. “There was always an unspoken fear of the healthcare system, and I knew even as a kid that wasn’t right,” he said. “People shouldn’t be afraid to ask for help when they are sick or hurt.” 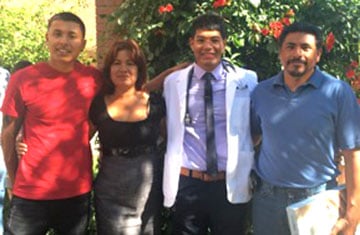 Mario Hernandez, second from right, is the first in his

Hernandez, who will soon graduate with his MD from the University of Colorado School of Medicine, said he chose to pursue medicine to help people like his family by providing a friendly face and bilingual fluency to explain medical procedures in English and Spanish.

“I didn’t know any doctors”

Hernandez is the first in his family to pursue higher education. “I didn’t know any doctors growing up. I didn’t even really know anyone who went to college,” he said, noting that his parents finished junior high before leaving to join the workforce.

Hernandez said he found any way he could to get close to medicine. His first job when he was 14 was an emergency room internship. After graduating high school, he became a certified nursing assistant (CNA), a skill that he continued full-time throughout his undergrad career to cover tuition. “I had to support my own education,” he said.

During his third year of medical school, during his anesthesiology rotation, Hernandez noticed a spark in himself, and said he was excited to go to work even despite the early morning schedule. “I like how structured operating rooms are,” Hernandez said. “We work together as a team to provide high-quality care for patients.”

While in his anesthesiology rotation, Hernandez noticed several occasions on which Spanish-speaking patients would be provided with a translator during pre-operative care but not in the operating room. “The operating room is a high-anxiety, scary place,” he said, noting that he would talk with the patients while they were awaiting their surgeon. “I think it was an example of where I was making a difference.” 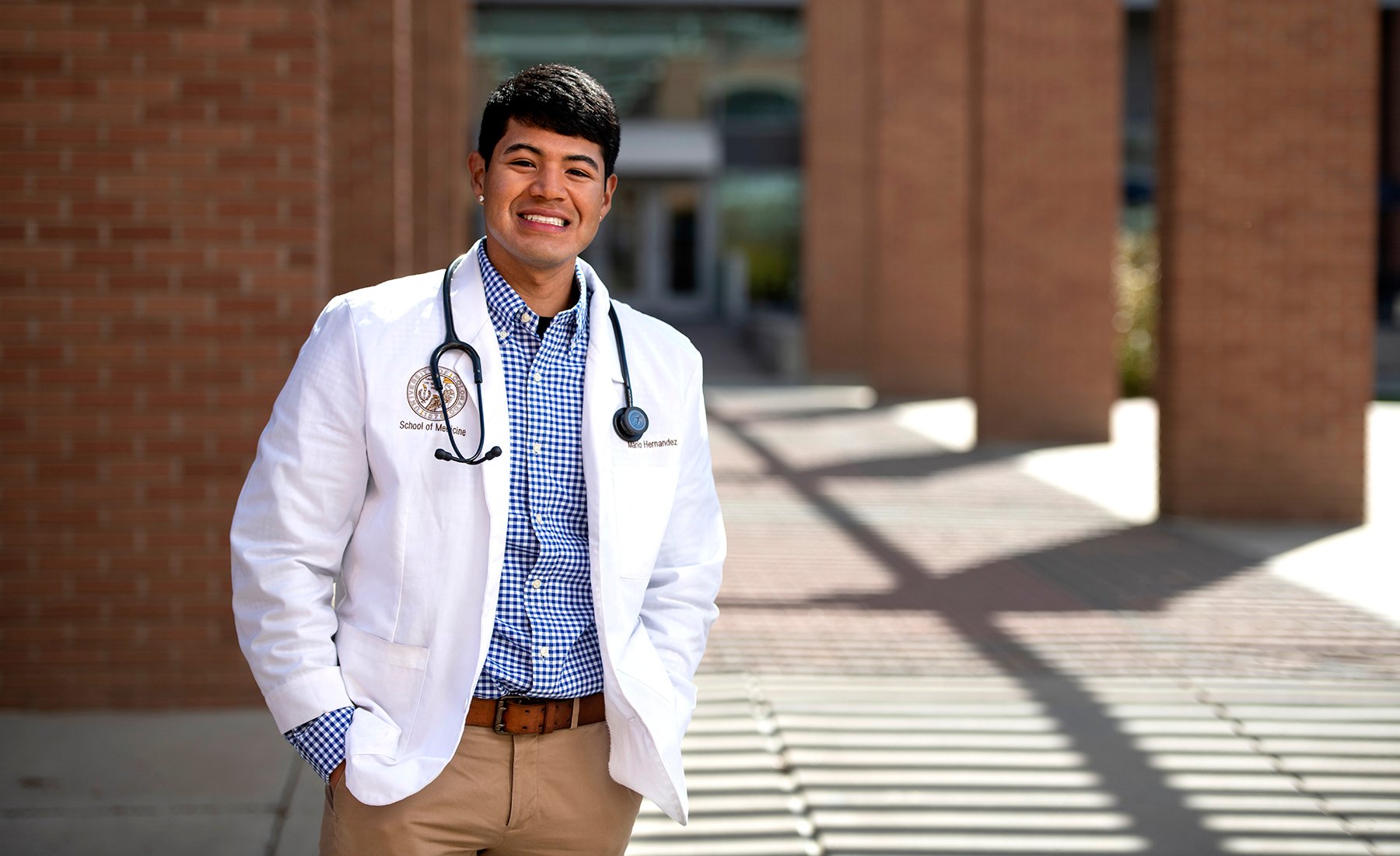 After the special virtual commencement ceremonies later this month, Hernandez will complete a preliminary intern year in general surgery at Saint Joseph Hospital in Colorado. This transition period will allow him to continue working with medically underserved populations. In 2021, Hernandez will head to Stanford University for one of the nation’s top residency programs for anesthesiology. He explained that, unlike some specialties, an anesthesiologist takes a holistic view of the patient. In anesthesiology, said Hernandez, “You see your results happen in real time – if someone is in pain, you can give them a nerve block or a medication and you can see the pain go away. It’s really fulfilling to see results in real time.”

Hernandez said as a first-generation college student, as an undergrad, he didn’t know anything about college. “I didn’t even know how to fill out financial aid,” he said. “I got behind a semester.”

‘People shouldn’t be afraid to ask for help

when they are sick or hurt.’

He credits a fortuitous meeting during his sophomore year with setting him up for success. Tricia Vasquez at CU Denver was an advisor for pre-med students who helped set him straight. “She sat down with me and explained all the med school requirements. She told me what I needed to be a competitive applicant.”

During his time at the CU Anschutz Medical Campus, Hernandez worked with Dominic Martinez, EdD, with the Office of Inclusion and Outreach, and Deborah Seymour, PsyD, with the Department of Family Medicine, on ways to give back to the community. “They mentored me through the creation of a program called middle school to medical school, or M2M,” Hernandez said. M2M is a medical student-run outreach program focused on providing junior high school students from historically underrepresented groups an avenue to engage with medical students.

“The overall goal of M2M is to spark their interest in higher education. Maybe they’ll be motivated towards a career in medicine to increase diversity,” he said.

Guest contributor: Shawna Matthews is a freelance writer specializing in science and healthcare.