In what one predicted would be a “game-changer,” Colonels Row on the west side of the CU Anschutz Medical Campus will house patients of the Marcus Institute for Brain Health (MIBH), bringing military veterans undergoing care a welcome dose of old-time camaraderie and homey comfort.

A century ago, Colonels Row served as officers’ quarters for the then Fitzsimons Army Hospital, which had already established a world-class reputation for the treatment of tuberculosis and other respiratory ailments arising from World War I.

Now the modernized facility at 1783 Quentin St. will continue the premier patient care and innovation that define the CU Anschutz Medical Campus in the 21st century.

One of the renovated bedrooms inside Colonels Row.

A celebration marking the re-opening of the historic building was attended by more than 100 veterans, benefactors and MIBH leaders, providers and patients, plus representatives from CU leadership and community members.

“This facility will open an invaluable new option for the institute’s in-patient veteran cohorts,” Neil Krauss, director of initiatives and outreach for Chancellor Don Elliman, said at the reception. “Suffice it to say, Colonels Row is a game-changer for the institute.”

The MIBH opened three years ago, quickly becoming a national model for the diagnosis and care for veterans who have suffered traumatic brain injuries (TBI) and related psychological health conditions. The institute’s leaders immediately set about creating on-campus housing for patients and their families.

UCHealth University of Colorado Hospital, which owns the property, offered a long-term lease while benefactors, including The Marcus Foundation, stepped in to help fund the renovation. 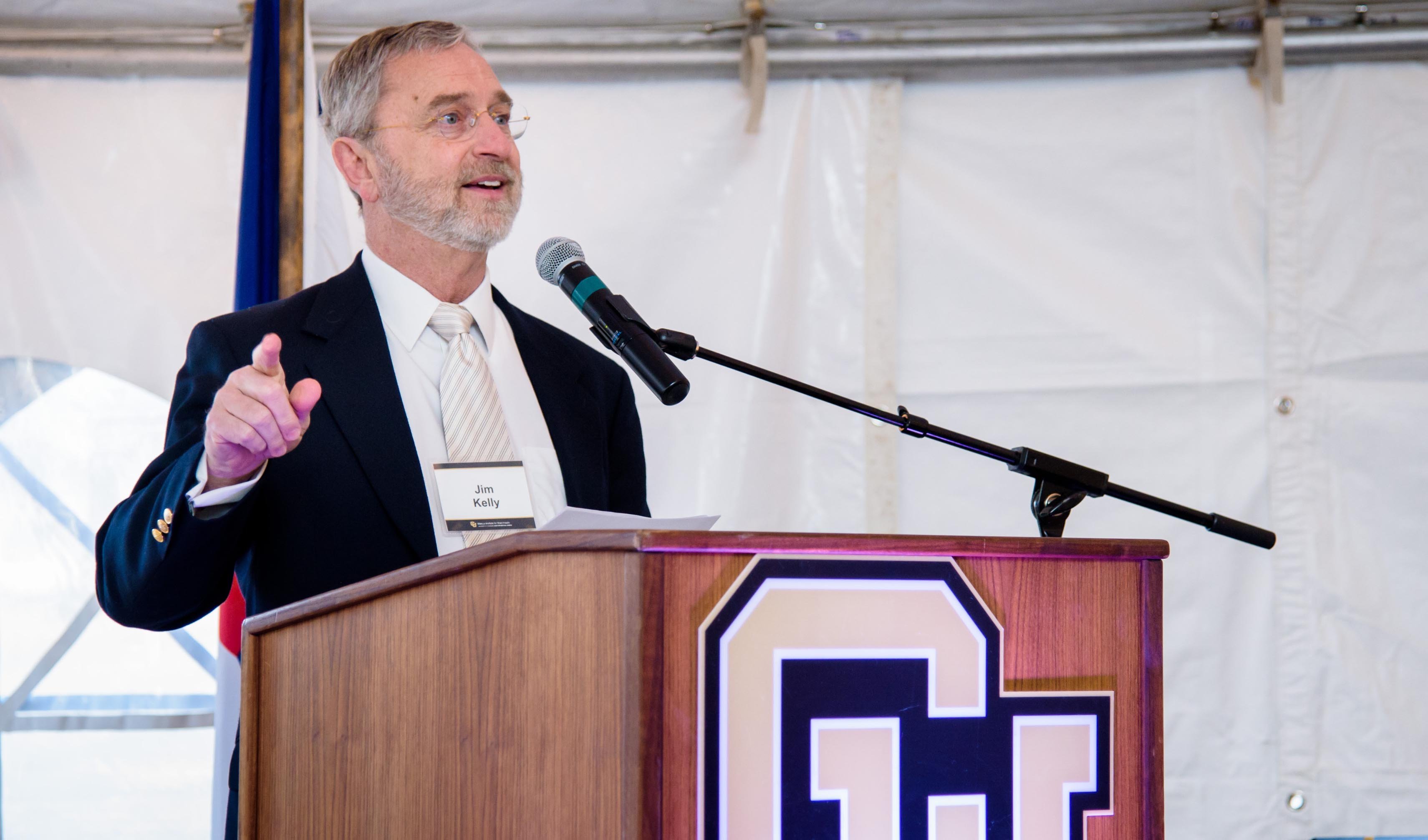 MIBH Executive Director James. P. Kelly, MD, thanks the many contributors to the project.

Until now, MIBH patients were housed at nearby hotels.

The housing complex is just a block from the MIBH’s home inside the CU Anschutz Health and Wellness Center.

The institute, which uses a holistic, multidisciplinary team approach for each patient, has achieved remarkable results.

“We’d had a lot of amazing people come through this program,” said Milo, MIBH director of Veteran Programs, Communications and Strategic Development. “It’s incredibly humbling every single time to hear their stories, hear what we’ve been able to do for them. But the biggest thing I always try to tell these folks is, ‘All we can do is open a door.’ They still have to walk through it.”

‘Gave me my life back’

Heibel, who joined the Alabama National Guard in 2008 and the U.S. Army in 2012, serving as an explosive ordinance disposal technician in Afghanistan, shared an emotional story of how he was initially skeptical of needing any TBI or psychological treatment. Then he saw how a fellow veteran greatly benefited from the MIBH.

Heibel said the three weeks he spent in the Intensive Outpatient Program, “genuinely gave me my life back,” especially thanks to conversations with providers and staff members and the creative component led by Art Therapist Gayla Elliot, MA, ATR. He recalled chatting with Judith Vanderryn, PhD, an MIBH psychologist, and feeling as though he “lived a thousand lives in three seconds.

Mason Heibel, an Army veteran, said the Intensive Outpatient Program at the Marcus Institute for Brain Health “gave me my life back.”

“So many things had just come together and clicked, and so many problems that I had just decided to carry with me, I figured out that I can just put it down,” Heibel said. “I don’t have to carry it. It was amazing. I felt lighter, felt happier, and the tools I gained here in this program have allowed me to continue that process of healing.”

Dr. Kelly said everyone working at MIBH pitched in on the Colonels Row project, and it received strong leadership from Milo and Ashley Blubaugh, director of development in the CU Anschutz Office of Advancement, as well as Dan Wilkerson, former CU vice president, university counsel and secretary of the CU Board of Regents. Wilkerson became the project manager, linking funding and construction pieces together, Kelly said.

“I can’t tell you how fortunate I feel just even being here talking about this right now,” Kelly said. “It seems like the manna keeps falling from heaven under the circumstances to make these kinds of things happen. It’s just spectacular.” 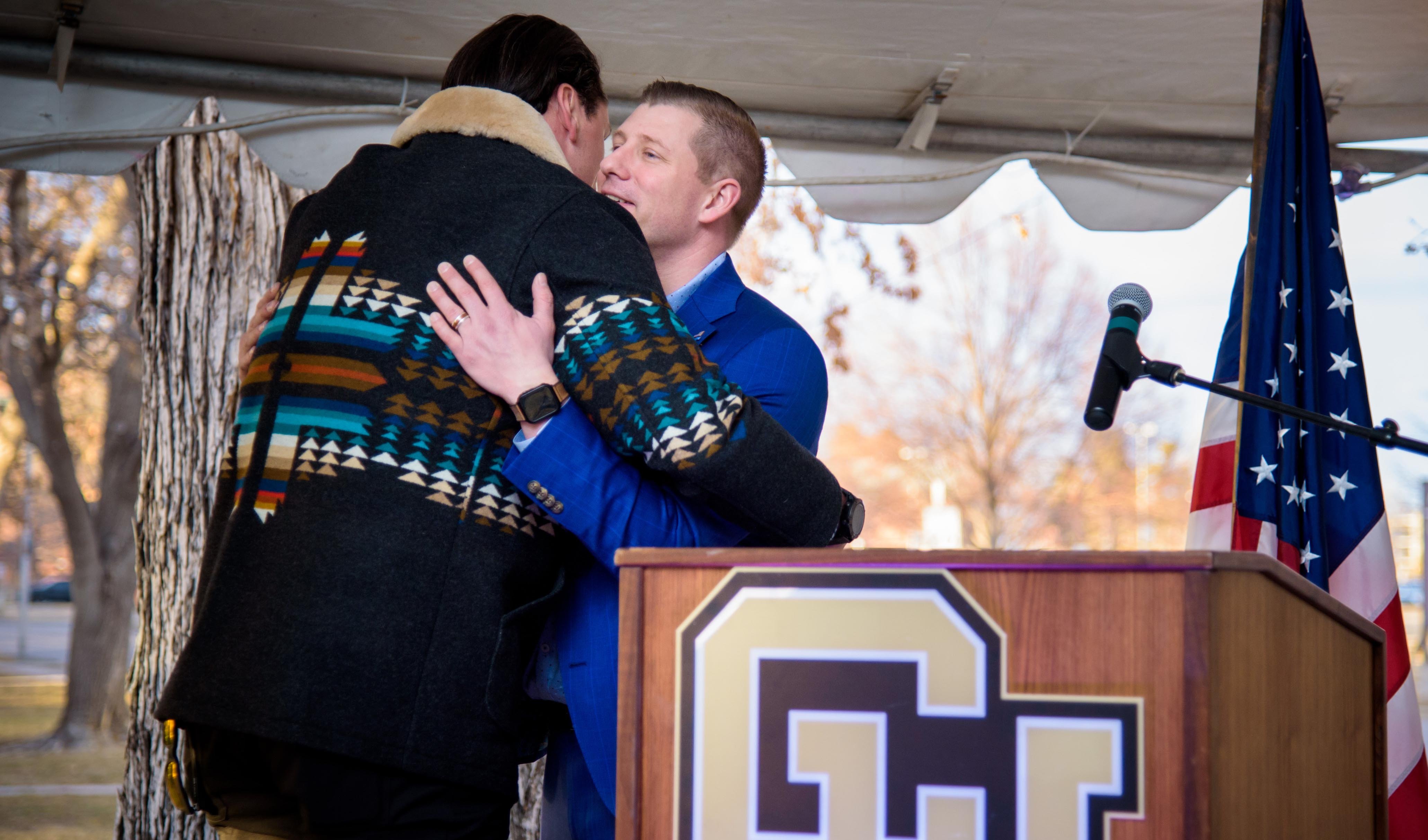 Guest rooms in the two-story Colonels Row are named after Colorado fourteeners – peaks standing over 14,000 feet – and there are generous spaces for gathering, including an inviting living room and a modern kitchen. The bottom floor is completely ADA accessible, including the bathrooms.

Speakers noted that the project wouldn’t have reached fruition without Kelly’s dedication, foresight and leadership. Key partners in building out the space included The Home Depot Foundation, Modern Bungalow and Borkholder Furniture.

The first guests were scheduled to arrive last weekend. Milo is confident that the Colonels Row accommodations will only enhance the patient experience when they come to MIBH.

“The amount of camaraderie that will be formed inside this household is going to change these folks’ lives,” he said. “In the military, we like to help other people, but we also miss that brotherhood. We miss that connection that we have with human beings when your life is on the line – whether you’re at war or not.

“This facility is going to be able to give some of that back.”