A radiation oncologist developed an award-winning virtual reality pilot program that brings patients face to face with their tumors. While that may sound frightening, patients gave overwhelmingly positive feedback. They said the VR sessions helped them better understand their condition, made them more likely to adhere to treatment regimens and helped them to ask better questions and be a part of their own care.

Thomas Delong, PhD, remembers the first time he saw the walnut-sized tumor growing on the base of his tongue.

“I sat down at a 2D computer screen and was shown the drawing where the (radiation) would go and all,” said Delong, an assistant professor at the Skaggs School of Pharmacy and Pharmaceutical Sciences at the University of Colorado Anschutz Medical Campus. “But that picture was pretty useless for me because I couldn’t visualize it.”

To Delong, the tumor was still mostly abstract. He could feel it, but he couldn’t really see it.

One day at the CU Cancer Center, Douglas Holt, MD, then-chief resident in radiation oncology, asked Delong if he would like to participate in a pilot program involving virtual reality (VR). He would sit for roughly a seven-minute session viewing his tumor through a VR headset and then fill out a survey about the experience.

'A child’s image vs. the Mona Lisa’

Delong slipped on the VR headset, and Holt flicked on a new world. Not only could Delong see his tumor in 3D, but Holt used a laser light to point out aspects of the mass as well as where and how treatments – radiation and chemotherapy – would combat it.

“When I saw the 3D image, it made complete sense to me,” said Delong, a chemist whose lab studies Type 1 diabetes. “It really was like a child’s image vs. the Mona Lisa. It was really impressive, really magnificent to see that. It really helped me understand (the tumor). It was really cool.”

The eye-opening experience of Delong’s, who has been cancer free for over a year, repeated among the 38 patients and caregivers who participated in the VR pilot through the CU Cancer Center.

Holt earned his medical degree at the University of Pittsburgh before coming to the CU Cancer Center and serving as chief resident in radiation oncology in 2020, where he noticed that patients generally didn’t fully grasp what doctors told them about their conditions. Seeking to bridge the gap and better engage patients in their cancer treatment, a light went off when he saw a demonstration of 3D medical imaging.

“I would argue that in the year of 2021, we are using the equivalent of an AM radio to teach patients where we could be using IMAX in 3D with VR,” said Holt, who recently won the 2021 Innovator Award from the Association of Community Cancer Centers.

While at the CU Cancer Center, Holt landed grants from the Colorado Cancer Coalition and from the Cancer Center’s radiation oncology department to spearhead the virtual reality program. He collaborated with CU Clinical Psychology and Colorado State University to explore the impact of VR with patients and their caregivers.

Holt, who is now a physician at Gamma West Cancer Services in Idaho Falls, Idaho, launched the pilot program in summer of 2020. “Patients loved it – they loved that they could see what was happening within their own bodies, that they could be face to face with their tumors … It ended up being a very positive experience,” he said.

And when patients were asked by the radiation oncologist, who was not their primary doctor – which Holt believes allowed them to be more candid in their commentary – whether they understood their care and condition, he heard a stream of confusion.

“Often patients and their caregivers related how they struggled to learn about their cancer and treatments with standard consultation methods, that physicians might as well be speaking a foreign language,” Holt said.

“If we overload patients with information, their eyes glaze over, and it just becomes too much,” he said.

Published research in patient education has demonstrated that:

Conclusion: If patients are only retaining 20% of information from their doctors, and half of that is an inaccurate recollection, patients are making important medical decisions when they are only accurately understanding about 10% information.

According to Holt, “The main problem is our current teaching tools do not convey complex medical information in a format that patients can understand.”

The semi-structured post-VR interviews with patients were especially illuminating. “I had a lot of patients tell me: ‘I simply don’t know enough to ask any questions.’ After doing the VR, they started asking questions about this or that – definitely higher-level questions. One gal said, ‘This was a leveler for me. And it put me on the same level as the physician; it let me be a part of my own care.’”

“When talking with a few doctors about using VR for patients, they would look at me and say, ‘Why do patients need to know that? It’s just a picture; it doesn’t affect what I do,’” Holt said. “But when you ask patients why they need to know with the level of VR, a lot of them said the same phrase; ‘It’s my body. It’s MY body. I want to know.’ Very powerful.”

Eighty-three percent of the patients in his clinical trial said the VR session was the top educational tool they’d experienced in a medical setting, and 97% said it should be a standard of care.

The next step, Holt said, is developing ways to make the VR technology scalable and efficient so it can enter the clinical mainstream.

While he received much faculty support for the idea, he acknowledged pockets of skepticism.

“I wish they could have seen the reactions I got from patients, because I’ve never had patients open up to me like that about this whole process,” Holt said. “I had several patients tell me, ‘You keep doing this. This is so important to us.’” 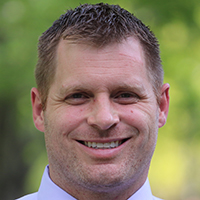