Home News What are the Potential Human Health Impacts of Hurricane Ian’s Massive Destruction? back to News

Jay Lemery, the Climate and Health Foundation Endowed Chair in Climate Medicine, provides an overview on the short- and long-term health impacts of a storm on the scale of Hurricane Ian and how providers and communities must prepare in the face of climate change.

In the wake of the extensive damage caused by Hurricane Ian as it made landfall across southwest Florida come new health concerns for residents in the impacted areas – ranging from traumatic injuries and waterborne infections to job stressors and mental health impacts.

In the following Q&A, Jay Lemery, MD, Climate and Health Foundation Endowed Chair in Climate Medicine, professor of Emergency Medicine, chief of the Section of Wilderness and Environmental Medicine, and co-founder of the University of Colorado School of Medicine’s Program on Climate & Health outlines the health concerns for communities affected by Hurricane Ian.

He also offers thoughts on lessons learned from Hurricanes Katrina and Maria and how medical providers can be strong advocates in fighting climate change.

What are the greatest health-related impacts posed by a hurricane of this magnitude, and who is most at risk?

The first part is the active hurricane: flying debris, big winds, 12-foot storm surges. Those are the things that are going to cause morbidity and mortality while the storm is passing.

What the danger is following a storm like Ian starts with places where there might be loose debris: lumber, nails, sharp edges, tree limbs, things like that. Residents in these areas are also walking around in water that’s not clean and might also have submerged, hiding debris that can cause cuts and lacerations. With that can come nasty skin infections, both waterborne (Vibrio) and your typical strep (Streptococcus) staph (Staphylococcus).

Then you think about chronic disease and disruptions to primary care. People won't be able to get easy access to healthcare if they have a big laceration, or even with chronic disease such as high blood pressure or diabetes. For example: connections to Sanibel Island that were taken out with Ian, so these residents now have lost a very important way of transit back and forth to the mainland. They now need to take boats. That'll all be disrupted.

When we think about who's at risk, we think about the physiologically vulnerable. Those people that are on the margins: needing chronic oxygen or regular visits to their physicians. That's where you begin to see a rise in morbidity from people that have a disruption in their healthcare.

With a disaster on the scale of Hurricane Ian, what are the subsequent impacts after the storm has passed weeks and months down the line?

There’s lots of uncertainty and economic stressors. Where are residents going to live? What's the status of their home? Do they have access to their local grocery stores? Are their neighbors safe? Does their job exist anymore? Did they have insurance and if not, how are they going to pay for their house repairs? People are forced to move. They're dealing with lots of paperwork from FEMA or insurance agencies, which may or may not exist for certain individuals depending on their insurance status and so forth.

This is where you have chronic stressors that can last for months and even years. Depression, anxiety, PTSD, and then even things like rise in suicidal ideation or substance abuse or child abuse have all been documented as risk factors after disasters of this magnitude.

What are the key precautions and policy decisions that can be taken to minimize the short- and long-term health impacts from a hurricane of this size?

I think the first response is that those impacted need help, and we should understand that they don't need help just while the news cycle is hot, but they're going to need help for months and even years. I think that's important to understand the anatomy of a disaster like this, and the long-term impacts, because that helps us really understand the effects of an extreme weather event.

The second thing is: It's important for us to look at climate change, look at the data, and have a sense of what's coming. We know that tropical cyclones in the Atlantic Basin are going to be more intense and stronger because they have more energy in their weather systems. What does that mean? It means hurricane mitigation and adaptation efforts will only become more important – particularly in the face of rising sea levels – which means storm surges will have a higher baseline.

Then at a much larger level, we as a nation or as a society can begin to adjust our risk assessment and say, "When we look at the threats and the list of important things to our friends and family and our neighbors, climate change is slowly moving to the top of that list." We need to start making really smart policy decisions because the health risks are only getting greater.

It’s becoming more evident that with the climate predictions we had 10 or 20 years ago, we’re on the higher side of these effects. The science has only gotten better, and it’s happening more intensely and faster than we had predicted – or at least within the range of our predictions.

What did you learn in the field work from Hurricanes Maria and Katrina that informed responses to future hurricanes?

When I was at Katrina, I was aware that the subacute effects are much longer lasting than I had thought, and you realize that the disaster was truly a complete disruption of people's lives that would not be easy to rebuild. One of the most striking things I saw was The New York Times graphic of the Katrina diaspora of people that lived through it.

It was a year or two later, and it looked like a Jackson Pollock painting of the United States seeing where all those people in those neighborhoods in New Orleans now live. You got a real sense of the scope and scale of the forced displacement. All these former New Orleans residents had to move – away from their friends and their families, their jobs, communities, the places they grew up, their social circles. That is incredibly disruptive.

With Hurricane Maria, we did a research project there looking at excess mortality. The message there was attribution science is very important. It's important that we as a society shine a flashlight on the data of these intense storms and understand the morbidity and mortality from them. Because it all comes back to our own risk adjustments so we can make smarter decisions because we truly understand the risks.

Maria was a case where the risks were underestimated initially, and the impact was downplayed. Then when you spoke to people in Puerto Rico and had objective data and best science epidemiologic methodologies – it really bore a different story, which was that it was quite impactful. In the end, the excess mortality was over 2,500 people.

How can medical providers bring messages on the dangers of climate change to their patients?

What we are doing now at CU Anschutz is really educating healthcare providers to be force multipliers in the field and to go and be eligible, effective leaders in healthcare.

In the short term, we espouse a patient-centric view of climate change as it relates to health. I think that's the perspective that we can bring from this program. Because there's a nuance here that we are not purely public health officials, but we're your bedside doctors and clinicians and nurses. That one-on-one patient perspective is something that we hold dear because I think that's a very unique feature of what we do.

It would be our role to talk about these issues with clinicians in our programs and say, ‘Hey, what are we worried about with a hurricane?’ Educate them to say, ‘This is how people suffer,’ and I think it's not that intuitive. Most physicians or nurses don't understand that there's an acute, subacute and a chronic phase to these disasters.

It's a novel body of knowledge unique to the disease threats, and that's what this is all about. I've said it before; I'll say it again: Climate change is a disease. It's a disease of vulnerability, it's a disease of disasters, it's sickness, and we are your doctors, we know sickness.

When we think of all of these different disasters that are accelerated by climate change, whether it's forest fires, excess heat, et cetera, where do hurricanes slot into that in terms of the danger level? Are they the ones with the greatest impact in both the short and long term?

Yeah, that's a great question. What we do know is that hurricanes have always happened, and climate change does not cause hurricanes, period.

What we do know is that climate change exacerbates hurricanes. It's making them more intense and more fierce – and because of that, the risks go up. We have the data to support that statement. Just for instance, what would've been a hypothetical Category 2 is now a Category 3 because of warmer waters. Ian is the same case. That has added destruction with it. You can apply that lesson across most climate change effects.

In fact, right now the preponderance of climate change effects is making existing things worse. Some larger reports, such as the United Nations’ Intergovernmental Panel on Climate Change, suggests that, in the next coming decades, climate change in and of itself will be a driver of morbidity and mortality.

For instance, in certain parts of the world, during certain times of the year, it will be too hot and too humid in a 24-hour cycle for the human body to cool off. Unless you have a fan or air conditioning, you will succumb to heat. That is a very scary thing to think about. We need medical leaders in this field to be a clarion voice alongside these communities. 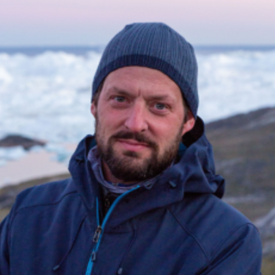