Home News What Was it Like on the Front Lines of the Spanish Flu? back to News

From typhoid to smallpox to the Spanish Flu, we’ve had no shortage of epidemics in the United States in the last 100 years and no shortage of nurses to help care for the ill. Now, it’s the coronavirus.

Precautions were simple 100 years ago – isolation, bloodletting, inhaling steam and ice baths. But not very effective. In some ways, we’ve come a lot farther and in others, we are resorting to the same tried-and-true methods of containment. Digging deep into the CU Nursing archives at the CU Anschutz Medical Campus uncovered a real-life account of a nurse who helped battle the Spanish Flu of 1918 and survived one of the most devastating pandemics in history. 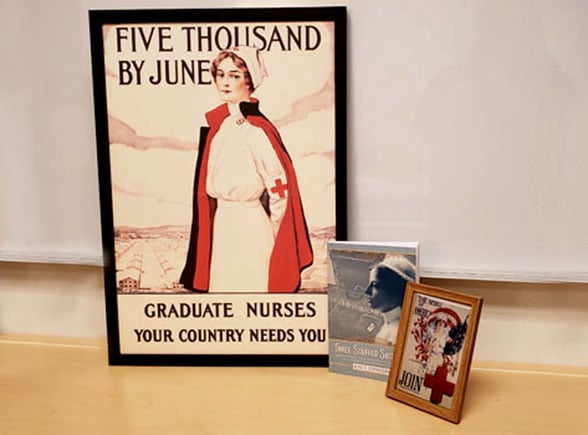 Some of the items on display in the CU Nursing History Center.

Shellabarger was an Assistant Chief Nurse in London. Her diary – memorialized in her biography titled Three Scuffed Suitcases -- recounts what it was like to be on the front lines of the Spanish flu and might be similar to how nurses feel today battling coronavirus.

Shellabarger lived through the flu that killed 50 million people worldwide. Perhaps she survived because she was a little older – 39. Most of those who died were young adults, in the prime of their lives. 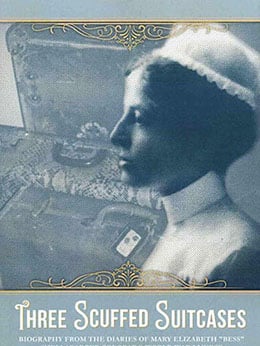 Biography of Mary Elizabeth Shellabarger, a

Colorado nurse who served in World War I.

The CU Nursing History Center at the Anschutz Medical Campus is open Tuesdays from 9 – 4 p.m. Get a glimpse into the past. Read accounts of nurses and see how they lived.

Before WWI the Red Cross was a still developing organization and by the time the war was over the organization had grown dramatically. The Red Cross Nursing Service was established in 1909 and the Hospital Service in 1916. The Nursing Services' principal task became to provide trained nurses for the U.S. Army and Navy. The Service enrolled 23,822 Red Cross nurses during the war. Of these, 19,931 were assigned to active duty with the Army, Navy, U.S. Public Health Service, and the Red Cross overseas. The Red Cross also enrolled and trained nurses’ aides to help make up for the shortage of nurses on the home front due to the war effort. Many Red Cross nurses and nurses’ aides were enlisted in the battle against the influenza pandemic of 1918. As part of the Red Cross war efforts, the University of Colorado created a two-year intensive nurses' training program in 1918 to get students trained quickly to meet the demand for trained nurses. Ruth Colestock (later CU faculty) was one of four students to complete the program. For already trained nurses, the Red Cross set up base Hospital Units, one of which was at CU Hospital, to send nurses overseas.

Photo at top: Nurses and children in Colorado don masks to ward off the influenza epidemic of 1918. Photo courtesy of History Colorado.

Guest contributor: Dana Brandorff, director of marketing and communications for the CU College of Nursing