INSIDE ‘THE HAB,’ MARS UTAH – When it comes to medicine on Mars, or even on a spaceflight to the Red Planet, “definitive care” means something very different than it does on Earth. Quite simply, it means that nobody is coming to help the crew tend to an injured or ill astronaut. 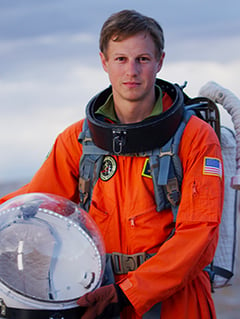 Ben Easter is an Assistant Professor of Emergency Medicine at CU Anschutz and works at NASA.

This was one of the more profound lessons students learned as part of a new Maymester course co-created and co-led by medical and engineering experts at CU Anschutz Medical Campus and CU Boulder. “Medicine in Space and Surface Environments” unfolded over three weeks in early May, with the last week taking place in the desolate surroundings of the Mars Desert Research Station near Hanksville, Utah.

The course is chock-full of simulation exercises that forced students to work as a unit and solve problems during fast-developing medical emergencies that could occur on Mars. The class is the brainchild of Ben Easter, MD, Assistant Professor of Emergency Medicine in the CU School of Medicine, and Allie Anderson, Assistant Professor of Aerospace Engineering at CU Boulder, in collaboration with other colleagues.

Arika Armstrong, an aerospace graduate student as well as an engineer for Lockheed Martin Corp., was among the 21 CU Boulder engineering students enrolled in the program. Taking a rare break from the rigorous slate of simulation drills – or extra-vehicular activities (EVAs) – Armstrong joined instructors Anderson and Easter for a candid chat about the class and space exploration.

The trio from the 2Mars crew sat down with CU Anschutz Today inside the Hab to record a podcast about this unique and innovative collaboration, one that positions CU Anschutz and CU Boulder as leaders in training some of the first of a new breed – first responders for deep space.

The ‘serious business’ of sims

Allie Anderson, co-teacher of the new Maymester class, is an Assistant Professor of Aerospace Engineering at CU Boulder.

Because so much of the “Medicine in Space” class is focused on real-world training, CU Anschutz Today asked Arika Armstrong, an aerospace engineering graduate student, to elaborate on the simulations and their impact on her. Here are her thoughts:

Was there a moment during your week in the field where it dawned on you: “Wow, these simulations really are serious business.” If so, what triggered that moment?

The search-and-rescue EVA was the event where I realized these simulations were serious business. I was part of the group that found most of the patients during that EVA. We were down in the bottom of a canyon with a patient who was mostly unresponsive and another patient who was lunging herself at other crewmembers because she was worried. This ended up with an incredibly realistic scenario regarding patient management. What really triggered it for me though was when I realized we were going to have to carry this guy out of the canyon on a makeshift stretcher, and we had no idea how far it was to the road where the rovers would be able to pick him up.

What was your role during the search-and-rescue EVA and how did your learnings help you grow into the rest of the week’s simulations?

Personally, I primarily helped to calm a panicking and asthmatic patient and helped carry out another patient on a stretcher. I learned a lot in that simulation. For example, communication is incredibly difficult with 20 to 30 people, and it's really important to keep track of every member of your team. More than anything, that simulation gave me a glimpse of how hectic a similar “real-life” situation might be, and it helped prepare me, mentally, for the simulations to come. I realized I needed to refine my communication methods, speak up when I noticed a hazard or issue, and stay calm despite any chaos around me. I continued working on those skills through the remaining EVAs.

What, in general, was the strangest or most profound thing that happened during the class and why?

I think one of the most profound experiences of the week was an EVA where two unresponsive patients required significant resuscitation once they were returned to the Hab. What made this stick out in my mind so much was the need for us to consider stopping. All prior training told us to “keep going until the patient is under definitive care.” Unfortunately, “the Hab” is your definitive care on Mars – there's nobody else coming to help you. The discussions about whether or not to continue were really insightful and provided a very important lesson.

Not every moment of the "Medicine in Space" class was serious business and intense simulations. Students enjoyed many light moments during meals and in the classroom, as seen here in the Science Lab.