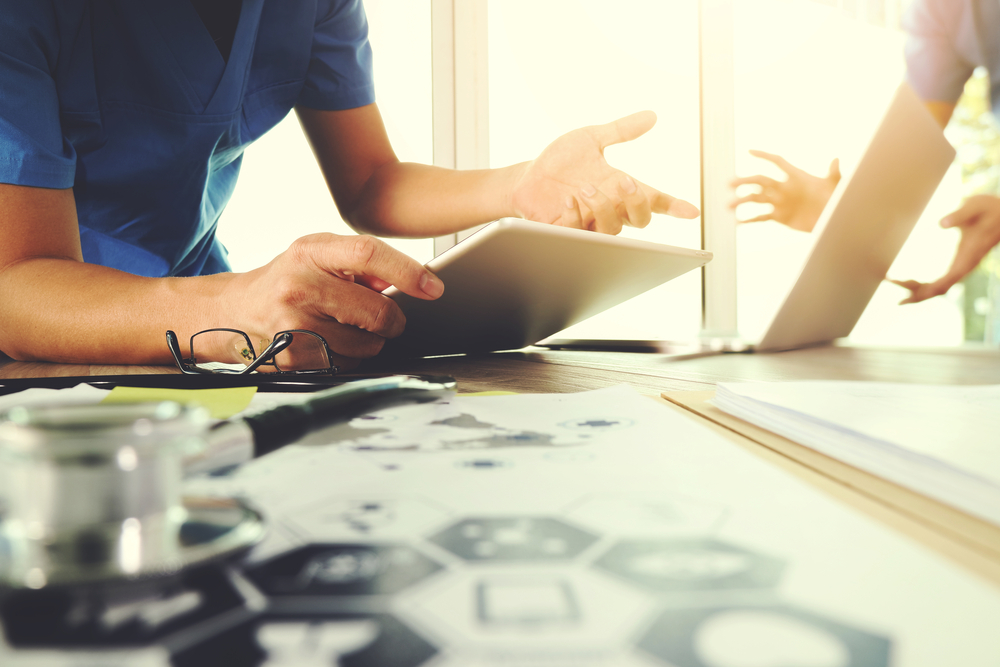 Home News How will artificial intelligence affect health care? back to News

The explosion of big data promises potential breakthroughs in disease treatments, but, just as in the development of new drugs, scientists and clinicians must exercise caution in how they apply algorithms and other technologies, according to a CU Anschutz panel of experts.

The discussion on “What’s on the Horizon of Artificial Intelligence (AI) and Health Care?” kicked off this year’s series of Transforming Health Care lectures at the CU Anschutz Medical Campus. About 80 people attended the session in Krugman Conference Hall on Wednesday. The panel was made up of Lawrence Hunter, PhD, director of the Computational Bioscience Program in the CU School of Medicine (SOM); Foster Goss, DO, clinical informaticist and assistant professor of Emergency Medicine; and Clay Smith, MD, director of the Blood Disorders and Cell Therapies Center at University of Colorado Hospital and associate chief, Division of Hematology, SOM.

Hunter outlined examples of how machine-learning systems are used in health care. The outcomes show mixed results: while some systems delivered illuminating data that helped clinicians, other instances revealed a machine’s inability to understand the nuances involved in, for example, a basic blood draw. “The goal is not to replace doctors, but to augment them — help them do a better job and spend less time doing boring stuff and more time on doing the things that really matter to patients,” he said.

Only 100 years ago, Hunter reminded the audience, “snake oil” was often passed off as “medicine.” Just as the Food and Drug Administration (FDA) certifies new medicines as safe and effective, the same process should apply to AI, he said. “These algorithms aren’t magic … It’s really important that we treat them the same way we treat all other aspects of medicine: make sure they’re safe and effective.”

Goss, a physician in the Emergency Department, has studied how the documentation demands of electronic health records (EHR), which are intended to improve patient outcomes, can actually create problems for physicians. In one case, he said, the large amount of “free text,” or unstructured data, in a patient’s EHR resulted in a clinician missing the man’s allergy to a particular drug.

In another case, speech-recognition technology — commonly used by clinicians when dictating information into an EHR — took a doctor’s “missed-her-period” comment on a patient and translated the menstrual “period” into a simple punctuation mark. So, when the patient had a complication, her subsequent physician misread the woman’s condition and prescribed a drug that’s dangerous to pregnant women.

Goss, along with colleagues, is working to develop an AI tool that can detect errors before they are entered into the electronic record. They are also working on a standardized knowledge base of allergies and reactions, which could be applied in an easily-found fashion in the EHR.

He is also working on a universal tool to help clinicians quickly identify all information in the EHR that’s relevant to a patient’s presented condition. The goal is to ensure that clinicians can make the right care decision at the right moment.

‘Medical errors are the third-leading cause of death behind heart disease and cancer. I think artificial intelligence has tremendous potential to actually improve the safety of the care we provide our patients.’ – Foster Goss, DO

“Right now, medical errors are the third-leading cause of death behind heart disease and cancer,” Goss said. “So, I think artificial intelligence has tremendous potential to actually improve the safety of the care we provide our patients.”

Meanwhile, Smith and a large team of personalized-medicine experts are researching ways to improve therapies for acute myeloid leukemia (AML), a disease that went decades without a significant advance in treatment, and other blood disorders.

Progress was recently made on a novel new therapy, fueled by combining clinical data with new information about cancer cells, and the campus continues to make great strides in other areas of personalized medicine.

“Chancellor Don Elliman and others here have had the foresight to build such an environment, a compass where we can marry this data together, and then layer on top of it the tools that allow people to analyze the data, visualize the data, and then hopefully give us quick and accurate answers,” Smith said.

Smith noted that the marriage of data and health care knowledge is a “team sport” and requires a diverse group of experts, which exists in spades at CU Anschutz. “That’s the key for all this moving forward,” he said. “This is not an electronic-record problem, it’s not a statistics problem, it’s not a doctor problem. It’s a problem that’s only going to be addressed effectively by a big team of people who have all of these disciplines and can work well together.”

The panel answered questions from the audience, including a query on ways the campus should incorporate AI training into its health care curricula. Hunter said the curricula should be agile enough to adapt to the fast-changing technological environment. As a baseline, the curricula should educate students about the errors that may occur in AI. Beyond that, he said, the curricula could offer, for interested students, a deeper dive into the theories behind AI.

“I do think there is a baseline that ought to end up in the curriculum,” Hunter said. “We don’t have that yet.”

All of the panelists agreed that, ultimately, human capabilities and machine-based technologies must be married in complementary fashion. It’s an exciting time, they said, and the health care advancements will be for the better, but they will arrive incrementally.

“When we have these cool new technologies, we have to figure out where do they actually help in medicine?” Hunter said. “Where are the places we know we could do better, and is there a technology that could help us?”