Home News Up in smoke back to News

Colorado’s reputation as one of the healthiest states in the nation is clouded by at least one inconvenient fact: more than one-quarter of high school students in the state used electronic cigarettes at least one day in the previous 30, according to a 2017 survey by the Centers for Disease Control and Prevention. That’s double the national rate.

Why the youthful embrace of nicotine-delivery systems in the guise of brightly colored, sweet-smelling, flavorful products? And why do large numbers of teens use nicotine products of any kind in the face of their well-established health risks?

Emery McDowell, a 14-year-old freshman at Grandview High School in Aurora, says the numbers of young people vaping and smoking show that the problem can’t be written off as one isolated to “unruly teenage behavior.” She sees the evidence in front of her every day, in person and online.

‘Normalized in our culture’

Nicotine use, McDowell said, “is normalized in our culture. I see people on Instagram and Snapchat posting pictures of people vaping, being all cool and stuff.” She’s upset by what she sees as a tobacco industry effort to market nicotine products to teens through social media.

“That’s not okay because you are using youths’ minds to build income for your companies,” she said.

McDowell is channeling her desire to change that as part of a state-funded program designed to pinpoint the reasons young people use nicotine and explore with them ways to prevent it. The program, called UpRISE, is funded by a three-year, $1.8 million innovative grant from the State Tobacco Education and Prevention Partnership, part of the Colorado Department of Public Health and Environment.

UpRISE provides funding to 21 youth-serving organizations and schools across Colorado to host coalitions of young people. The UpRISE movement is led by a 10-member Youth Action Board, which includes McDowell.

Each coalition works with an adult advisor trained by the Center for Public Health Practice (CPHP) at the Colorado School of Public Health to identify young people who want to combat nicotine use. 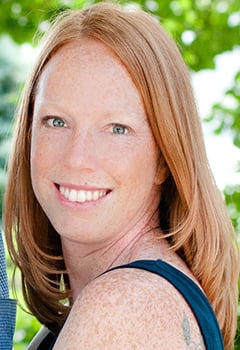 Heather Kennedy, a 2010 graduate of the Colorado School of Public Health, wrote the grant for the UpRISE program.

The primary goal isn’t to issue warnings about the health risks of nicotine, but rather to illuminate use of the substance as a social justice issue, said Heather Kennedy, youth movement project manager for CPHP, who wrote the grant for the UpRISE program. Kennedy received her Master of Public Health degree in Community and Behavioral Health from ColoradoSPH in 2010.

“We’re not here to say to young people, ‘Don’t smoke. It’s bad for you,’” Kennedy said. “We’re trying to move people to act.” That requires providing young people with facts that tie nicotine to a wide range of community problems. For example, she noted that nicotine use is highest among the most vulnerable: those disconnected from their schools and communities because of mental health issues, exposure to trauma, economic instability and experiences of discrimination due to gender or sexual identity.

“We can’t just be focusing on single issues like tobacco or mental health,” Kennedy said. “We need to see young people as humans that exist in the world with complexity and nuance and honor the full breadth of who they are.”

That idea is at the core of the training adult advisors receive, Kennedy said. Their role is to facilitate discussion of what students believe drives nicotine use by themselves and their peers, not to direct them toward preconceived goals.

“We meet with adults to talk about what it looks like to be a good facilitator,” Kennedy said. “That is not that you are delivering something to young people. It is that you are facilitating conversations about things you don’t know the answer to. You are inviting young people to have a conversation with one another and with you. It’s true dialogue, not instruction.”

Nicotine use: Finding the root cause

That can be easier said than done, said Natalie Moore, school counselor at Chaffee County High School, a small (39 students) alternative public school in Buena Vista. Moore advises an UpRISE coalition of six students who “got fired up” when she invited them to learn not only about nicotine use but also its connection to public health and social justice issues.

Heather Kennedy, youth movement project manager for the Center for Public Health Practice, speaks at the TEDxCrestmoorParkWomen event in 2017.

“As an adult and especially as an adult who values having control over a situation, it can be really awkward,” Moore said. “[As adults] we believe we’re supposed to be the experts. This is quite the opposite. The activities get students moving, thinking and doing and gets them to a space for a discussion.”

For a week, Moore led two-hour-plus discussions with the group that aimed to peel away “like an onion” the reasons for nicotine use among themselves  – five of the six smoke or vape – and other young people. The aim: find the root cause and then explore ways to address it.

Nicotine helps to relieve stress, the students said, but that opened the question of what causes the stress. They decided the primary driver is trauma, which includes bullying, witnessing domestic abuse and a friend being shot in a drive-by shooting, and enduring parental divorce and death, Moore said.

Materials supplied by the UpRISE program that showed how tobacco companies target specific communities also piqued the coalition students’ interest, said Moore. She noted that just one of the six students in the Chaffee County High School coalition identifies as a white heterosexual male. The CDC and other organizations have reported that smoking rates for LGBT adults are higher than for straight adults and that tobacco companies have used marketing campaigns aimed at the LGBT community.

“That hit home, that someone was targeting them,” she said. “When you connect with someone personally, that’s how you connect to a greater cause of social justice.”

All of this led to the question of what the Chaffee County students could do to help relieve stress without turning to nicotine. They settled on using some of the $5,000 their coalition received from the grant to get training in mindfulness techniques from a local instructor. With the training, which began on-site in mid-January, the students aim to become “mindfulness ambassadors” equipped to lead their peers in short stress-busting sessions that could short-circuit the vaping epidemic.

In the spring, UpRISE coalitions will create arts-based projects to share what they have learned about nicotine use with their broader communities. Therein lies valuethat goes beyond the health benefits of avoiding nicotine.

“[UpRISE] gives us a voice in the community,” one student in the Chaffee County coalition told Moore. “Being in this coalition, we are going to do awesome stuff.”

That positive attitude is a powerful antidote to feeling marginalized – a driver of nicotine and substance use, Moore said. “Making a connection to the community is not only about offering knowledge, but knowing there is a problem and that you can be part of the solution,” she said.

Similarly, McDowell says her work on the UpRISE Youth Action Board has helped her connect with peers who share her passion for counteracting the growing influence of vaping.

“More and more kids are [vaping] because they think it’s cool,” she said. “The program has been valuable because before I joined it, I felt like I was alone. Now I’m being around so many other people who know the same things I know and want to stop it and actually feel like this could work.”

The board members collectively have “a deep interest in vaping in their communities and how the tobacco industry exploits vulnerable populations,” added Daniel Martinez, Jr., youth programs senior specialist with CPHP – making it a prime focus of a planned statewide activity among the coalitions in 2019.

Kennedy believes UpRISE is an opportunity for cities and towns around the state to tap into the underutilized power of young people.

“One of the goals of UpRISE is to have youth be seen as passionate change-makers in their schools, neighborhoods, and communities,” she said. “Young people are starving for opportunities and I believe that it is our job as adults to figure out ways to integrate them into social, political and economic life.”