Home News Serendipity back to News

“I don’t know if we each have a destiny, or if we’re all just floatin’ around accidental-like on a breeze. But I, I think maybe it’s both.” -- Forrest Gump, 1994

At 10 years old, Crystal (Constantine) Masterson was described as determined. A child of the ‘70s and ‘80s, she was influenced by the Cold War. Suffering from recurring nightmares about nuclear war since the age of five, Masterson begged her mother to let her walk across the U.S. in 1986 in the Great Peace March for Global Nuclear Disarmament (GPM). She recalled, “My mom said that I was so determined that she ‘couldn’t say no to me.’ I’m forever grateful to her as she also understood that this type of activity gives kids a sense that they have some opportunity to change what is happening and they have a say.” Asked if she’d let one of her children march across the U.S. with people she didn’t know, Masterson said, “I don’t know if I could do that.”

After meeting with some of the marchers who took the young Masterson under their wing and being reassured that background checks were run on all participants, her parents relented. Trust, letters, phone calls, and the kindness of strangers with a single-minded purpose (to ensure the survival of our planet) helped allay her parents’ fears. Without cell phones, the family relied on letters and landlines to keep in touch. From Los Angeles to D.C., the march lasted eight and a half months and included 3700 miles of cross-country terrain. Masterson who joined the march in Colorado describes it as “a mobile city where I learned self-sufficiency and to appreciate the communities that we walked through.”

“Moments Like these when you meet really important people in your life.” 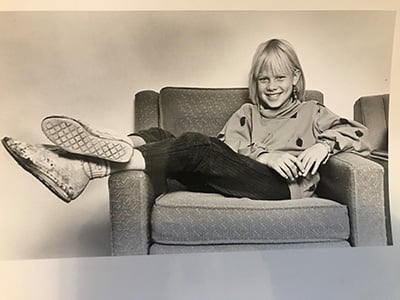 Highlighted in local newspapers and even People Magazine, Masterson was the youngest unaccompanied marcher. Empowered by what she had accomplished, Masterson said, “It’s moments like these where you meet really important people in your life.” And that’s where she met Kate Koschoreck, CNM, MSN, who was “searching for what I wanted to be when I grew up.” She discovered it on the march in a book titled “The Midwive’s Story.” Upon returning home after the march, Koschoreck earned a nursing degree from CU, followed by a midwifery degree from The Frontier School of Midwifery.

“We stayed connected. I even interviewed her about midwifery when I was 15 years old as I was a birth coach in a teen parenting program at my high school,” said Crystal. “Talking with Kate solidified that midwifery was what I wanted to do with my life.”

Before enrolling in a nursing program, Masterson struggled with moving straight into midwifery or getting her Bachelor of Science in nursing first. A chance encounter with nursing ‘great’ and CU Nursing Dean Emerita Jean Watson would prove life altering.

Seated next to Watson on a flight to see her ailing grandmother provided Masterson an opportunity to pick the brain of this leading nursing theorist. “I didn’t know who she was. I just noticed she was writing on CU College of Nursing stationery. So, I started a conversation,” Masterson recalled. Watson gave her some advice that stuck with her. “She said that compassionate care and bedside nursing are extremely important and that I should get my bachelor’s degree first.” Masterson followed Watson’s advice and discovered that she did not fully understand nursing until she had earned that degree. “That was extremely valuable. I found that I loved nursing so much that I wanted to wait to go to graduate school for my midwifery degree.”

After Masterson earned her undergraduate degree from CU Nursing, she got a job in labor and delivery at the University of Colorado Hospital. Coincidentally, Koschoreck followed Masterson to the same unit. “Working together as nurse and nurse-midwife was a great experience. Throughout the years, she encouraged me to go back to graduate school,” said Masterson.

Several years later, Masterson began working on her midwifery degree at CU with Koschoreck as her supporter. The thirteen-year delay allowed her to share the experience with her three children who understood she was living her dream. After earning her master’s degree and becoming a Certified Nurse-Midwife, Masterson joined the University Nurse Midwives practice where she works once again alongside her marching buddy and mentor Koschoreck. “It was like coming home,” said Masterson who recalled starting on the unit as a nurse intern while pursuing her bachelor’s degree. Nearly 18 years later, the unit has become a second home.