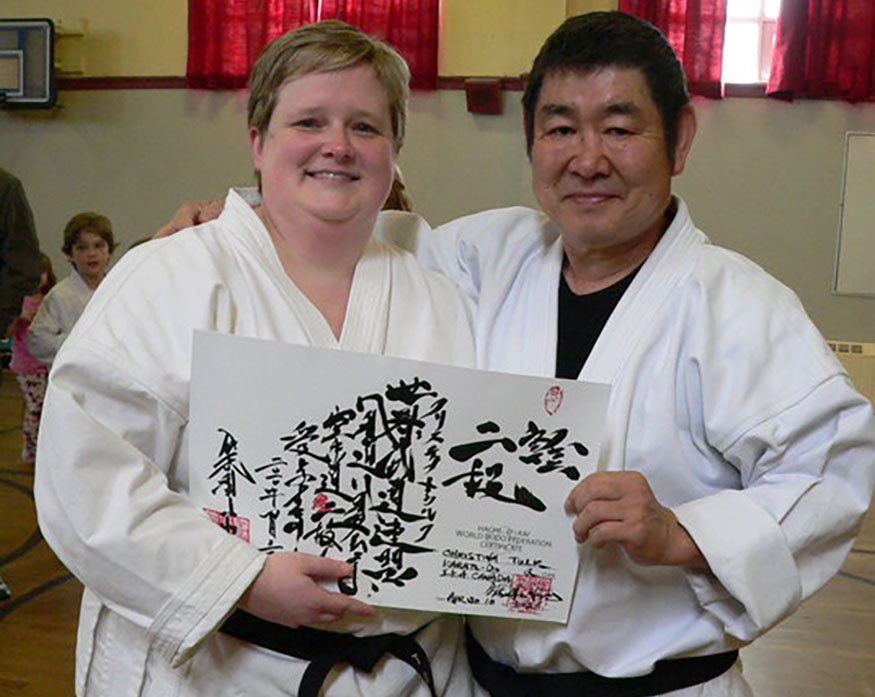 Christina Tulk of Corner Brook, Newfoundland, Canada, came of age during the Karate Kid, Mr. Miyagi and Ralph Machio craze of the 1980s. She was 9 years old when the movie hit theaters. “That’s when I got bit by the karate bug. I am 40 years old and still at it,” says Tulk.

Karate teaches discipline, self-control, confidence, and drive – all necessary qualities to attain a third degree black belt, and a doctorate of pharmacy while working. Only 10 percent of students of karate ever receive a black belt. One percent achieve a second, third or fourth degree black belt. “It is not something a lot of individuals can claim,” says Tulk. “One of my most proud accomplishments is to be called ‘Sensei’.” The title, which means teacher, was conferred on her when she received her third degree black belt.

According to Tulk, “Karate teaches control over yourself – control over your movement and your mind.” Something she feels has come in handy as a working pharmacist pursuing a doctor of pharmacy degree long distance. As a pharmacist owner, Tulk encounters high stress situations. “Karate has helped keep my emotions in check – especially during patient interactions that can escalate quickly when patients are scared, dealing with insurance, or concerned about themselves or a family member.”

As a business owner, Tulk realized that if she wanted to be involved in advanced scope of practice, which is where the profession is headed in Canada, she had to complete a doctorate. She was first accepted into the University of Toronto’s program, but ultimately chose CU because she had heard so many good things from fellow Canadians and graduates. “I had been a working retail pharmacist for years before I started to pursue this degree. Karate has really helped me keep focused through this program,” says Tulk.

For Tulk who is also a preceptor for Memorial University School of Pharmacy, the teacher became the student. “I had zero experience in hospital pharmacy, and had to step out of my comfort zone, especially during rotations,” says Tulk.

Armed with her doctorate and the experience she attained during the program, she has extra knowledge and confidence in the clinical environment – allowing Tulk to take on the mantle of Sensei, not just in karate, but in the field of pharmacy, too. “This degree has already opened doors for me,” says Tulk, who has aspirations of teaching at Memorial University School of Pharmacy.