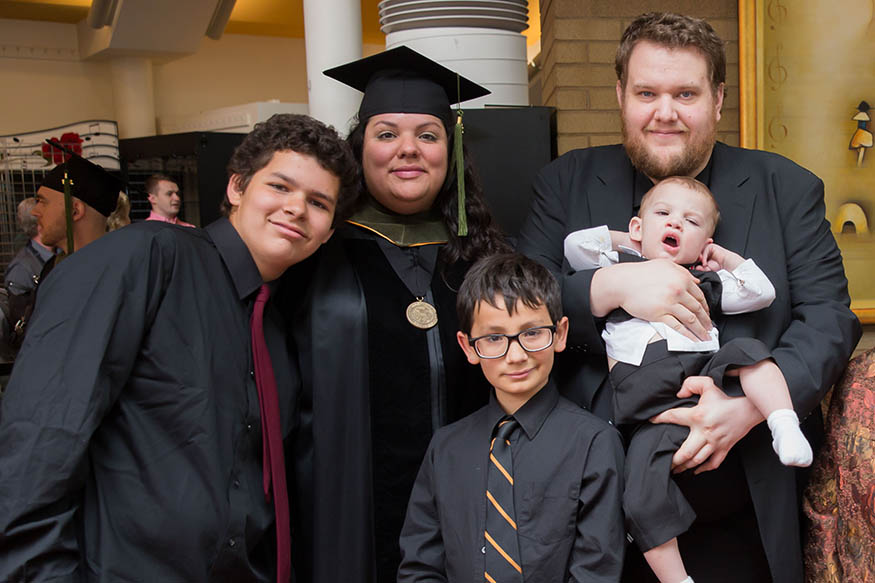 “I was going to go to prison or die,” says Anastasia Sosa Vozza Bell.

A childhood fraught with family dysfunction, clashes between mother and daughter, homelessness, and exposure to the seedier side of life, Bell says her life was “full of chaos and drama."

“My mother was a free spirit. She was fun to hang out with because all she wanted to do was party. It took me a long time to realize what I wanted, and how to get there,” recalls Bell.

As a child, fighting between mother and daughter was constant. “She loved to get high, and never hid anything from me.” At one point, Bell’s mother started growing marijuana in their home, which was eventually raided by the police. Due to the constant fighting between mother and daughter, she ended up in juvenile hall, then a group home. Bell spent most of her teenage years on probation. “The court ordered I get my GED, and I did. When I went to take college classes, I was told I needed remedial classes because I couldn’t even add and subtract negative numbers.”

At 19, she was kicked out of her mother’s home, she rented a place, and worked the night shift at a local gas station. She lost the job, and had no place to live. "It was the worst time of my life. I was homeless…not in the traditional sense of downtown with a shopping cart. I was couch surfing on friend’s couches."

Bell started living with a friend, and while visiting her mother got into a fight again. And back to jail she went. While in jail, she discovered she was pregnant with her first child, Thaddeus. "It was the beginning of getting my life together. Getting pregnant saved me," admits Bell.

By the time she was 24, Bell gave birth to her second son, Amadeus; had been incarcerated several times, was on welfare, and receiving cash assistance. She had few prospects for a better life. But the hard knocks she had received taught her something very valuable. She learned that to have a better life she needed to get a decent paying job, and an education.

She ended up living in “a shanty with no electricity. I couldn't afford anything else," says Bell. “I couldn’t go back to living with my mother. I knew it would end in jail again.” Without electricity, she filled out job applications by candlelight. She got a job with an insurance company, Chubb. "It was a great job. They helped turn my life around, and made it possible for me to go to school," says Bell. The company accommodated her schedule, allowed her to work part-time, paid her a good salary, encouraged her to attend classes, and even offered a 401K, in which she participated. "They were good to me. They believed in me and cared," says Bell.

During that time, she met, and moved in with, her boyfriend. "He was a Godsend, and helped me be a better person," says Bell. They both were getting their lives on track, and began classes at a local community college. "I took chemistry classes, and started to think about a future," says Bell.

Bell revisited the idea of pharmacy as a possible career --  a profession she had aspired to when she was 13. She became the president of the Pre-Pharmacy and S.T.E.M clubs, and started to weed people out of her life. "I began to get a life outside of the chaos of my youth," says Bell.

After accruing credits for pharmacy school, she applied to two programs -- Las Vegas and CU -- and interviewed at both. The CU interview was a stretch. "I bought a suit, flew out, and rented a car -- that was a huge financial burden for me," recalls Bell. But when she arrived on campus she was informed that she was short one class. Her immediate thought was, "Why come all this way for disappointment?" She thought about chucking it in and going over to the Coors Brewery for a free beer and tour to commiserate, but something made her stay. "I decided to stick it out, and do the interviews just for practice," says Bell.  And, it paid off. She received a letter of acceptance, but it required she complete the one class she was lacking. She deferred entrance into the program for one year until she could take the class, and prepare to move to Colorado with her two boys.

During pharmacy school, Bell excelled. She also met her husband, Greg, and had a third son, Sterling, during her third year of the program. “Greg put his schooling on hold, so I could complete the program. He works the graveyard shift, and helps with our son. He’s an amazing father and husband,” says Bell.

For Bell, her journey has not been easy. It’s been long and fraught with a lot of bumps along the way. "But there is light at the end of the tunnel," says Bell. For Bell, the difference has been the people who helped her, and believed in her when others didn’t. Those are the people she considers “family.”

Today, Bell's future is bright. She has a pharmacy job already lined up with Walgreens in Northern Colorado, and has a beautiful family. According to Bell, "I'm grateful that my life is no longer full of chaos and dysfunction. Now it's the normal chaos of family and school. I love the calmness, and know that it could have been so very different."