As the fall 2016 semester wrapped up, Erin Terrio prepared for finals the same way as any other student.

“She was in the middle of finals, and she was doing all the crazy stuff you do during finals week: staying up all night and studying and studying,” said her sister and roommate, Jennifer Terrio, who is a student at the University of Colorado School of Dental Medicine. “Until the very last second, she was trying to get through all of her finals.”

Terrio was halfway through her second year with the Skaggs School of Pharmacy and Pharmaceutical Sciences and almost done with finals when she died of complications from cystic fibrosis, a disease that causes lung infections and makes it harder to breathe because of thick, sticky mucus that clogs the airways.

The school of pharmacy will honor Terrio with a posthumous PharmD degree at the 2019 commencement ceremony at the University of Colorado Anschutz Medical Campus. Her parents will accept the degree on her behalf. 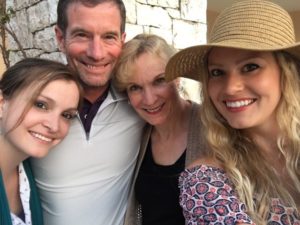 Beverly Brunson, the school’s director of student services, said Terrio’s determination to complete her coursework as her condition worsened is a major reason the school decided to award her with a posthumous degree. The rare honor marks the first time the school has awarded an honorary degree to a student in the 25 years Brunson has been with the campus.

“She had this disease, and it didn’t stop her from pursuing her PharmD — she still wanted it,” Brunson said. “Some people might just give up and say, ‘I’m sick and I can’t do this.’ She really pursued this.”

Jennifer Terrio remembers her sister as determined, creative and introverted. She practiced karate as a child, played softball and golf and designed her own T-shirts. She was always on top of her studies, she said, and when she decided she wanted to do something, she did it.

Jennifer Terrio said her sister wanted to study pharmacy likely because she wanted to improve people’s lives through medicine in a way that didn’t put her own health at risk. Because mucus clogs the airways of people living with cystic fibrosis and can trap bacteria, it’s essential to minimize contact with germs.

More than two years later, Terrio’s impact lives on at the Skaggs School of Pharmacy and Pharmaceutical Sciences. This year, a student who has overcome a disease or illness will be awarded a scholarship created by Terrio’s parents, James and Heidi Terrio, as a way to honor their daughter.

Her impact was especially evident at a memorial hosted on campus at the Richard D. Krugman Conference Hall. 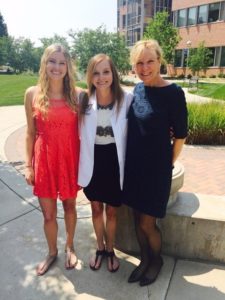 Cecilia Romero, program assistant in the Office of Student Services, said she remembers ordering 300 chairs ahead of the ceremony. All of those seats filled up quickly, she said, and people ended up standing along the walls to honor her.

“There were that many people,” she said.

For her sister, her legacy will live on in her own career. Jennifer Terrio said her sister encouraged her to study dentistry. As she wraps up her third year at the school, she has her sights set on becoming an orthodontist, making her a doctor, like both of her parents. A running joke in the family was that all of the Terrios would, one day, become doctors.

When their mom heard the news that her daughter would receive a PharmD degree, Jennifer Terrio said, she told her this: “We really will all be doctors.”