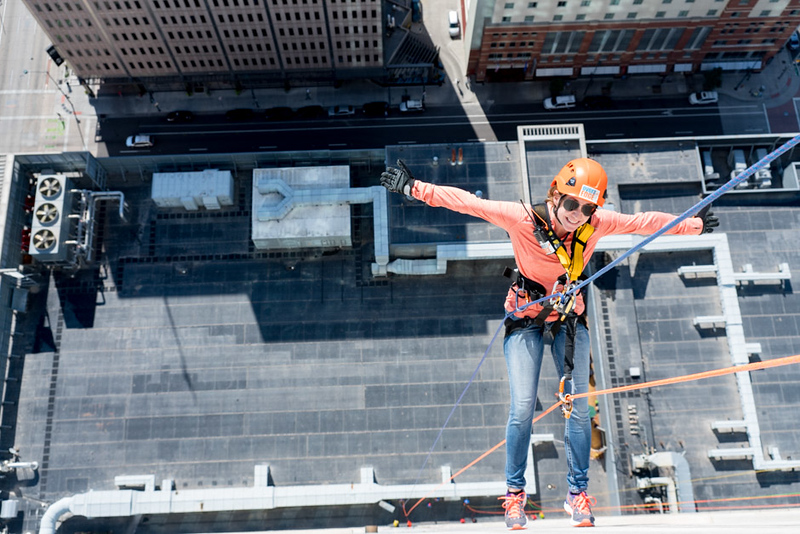 Home News Denver Over the Edge: Rappel a skyscraper to raise money for cancer research! back to News

Have you ever wanted to rappel 34 stories down one of Denver’s tallest skyscrapers? Better yet, have you ever wanted to peer-pressure an unsuspecting friend, family member or coworker into sliding over 400 feet down a thin cord? Now’s your chance! From September 5-7, Denver Over the Edge returns for its 10th year. The event, a fundraiser for the Cancer League of Colorado benefitting University of Colorado Cancer Center, is now enrolling victims – er, “rappelers.” Simply register to join an existing team or sign up and start gathering support!

“About 40 percent of the population, it makes them queasy just to think about it, but really, stepping over the edge is the only bad part,” says Jim Hackstaff, Esq., Cancer League of Colorado volunteer and co-chair of this year’s Denver Over the Edge. As for himself, “I’m always at the base heckling with my bullhorn,” he says with a wink.

In fact, participants are very unlikely to plummet to their demise. Cancer League of Colorado contracts with a company that runs for-charity rappelling events around the country, and staffs the event with volunteers from the South Metro Fire Department, who are not awarded their required volunteer hours if they drop anyone. This team ensures all participants are properly harnessed and helmeted, connected to the rappel line, backed up by a safety line managed by trained staff, and then expertly cajoled into dangling from a short crane-arm high over downtown Denver.

In 2018, there was an Elvis and a giant dinosaur. The oldest rappeler was 90 years old and many teams were made up of families including kids (minimum weight 100 pounds so that you can actually get down and don’t end up stuck above the city for an extended period of time). One memorable year, CU Cancer Center Deputy Director Andrew Thorburn, PhD, of Scottish descent, rappelled in a kilt. Pictures are suspiciously absent.

Participants must raise minimum $1,500 for the “privilege.” Then, rappelers are assigned a time during one of the event days and event staff takes it from there – all documented for posterity by professional photographers.

“A bunch of people come from the climbing communities around town. Then there are some businesses and families that put together teams. Also, individuals who have been patients or know people affected by cancer, and also doctors and research – all sorts of people do it!” says Carla Leverman, event co-chair. BTW, if you want to out-raise Carla, you should get started – as of August 13, her team has already raised $6,540.

“It’s one of Denver’s most fun fundraising events,” Hackstaff says. “It’s quite a thrill and one of the best things you can do to help develop new treatments for cancer patients in the state and beyond.”

Visit the Denver Over the Edge homepage to learn more, support your favorite rappeler, or join the fun!