“For a drug to get simultaneous approval for use against two different targets is somewhat unique. I don’t know of this ever happening before,” says Robert C. Doebele, MD, PhD, director of the University of Colorado Cancer Center Thoracic Oncology Research Initiative, senior author on the ROS1 study, and first author on the NTRK study.

About 2 percent of lung cancers are driven by the improper fusion of the gene ROS1 with one of a handful of possible genetic partners, resulting in a cancer-causing ROS1 fusion gene. About 1 percent of all solid tumors, including but not limited to lung cancers, are similarly caused by NTRK fusion genes. The FDA-approved drug crizotinib can silence the action of ROS1 fusion genes in some cases, but can’t reach cancers that have metastasized to the brain. And, unfortunately, 36 percent of patients with ROS1+ NSCLC already have brain metastases at the time of advanced disease diagnosis, and many more will go on to develop brain metastases during the course of care.

“For ROS1+ lung cancer, entrectinib represents a new and better standard of care due to entrectinib’s effectiveness against ROS1 in the body and especially due to its activity against ROS1+ brain metastases,” Doebele says. “For NTRK cancers, the picture is a little more complex and I think it depends on an NTRK+ cancer’s chance of developing brain metastases. Personally, if I were a patient and felt there was any chance of me getting brain mets, I would want this brain-penetrating drug.”

Included in these phase 1 or 2 studies were adults with locally advanced or metastatic ROS1+ or NTRK+ NSCLC who had received previous treatment not including other ROS1 inhibitors. Patients received entrectinib at a dose of at least 600 mg orally once per day, with at least 12 months follow-up. Doebele describes the drug as “well tolerated with a manageable safety profile,” with side effects including weight increase (8%) and neutropenia (4%). Eleven percent of patients had serious treatment-related adverse events, the most common of which were nervous system disorders (3%) and cardiac disorders (2%). No treatment-related deaths occurred.

“The genes ROS1 and NTRK are on a growing list of known genetic drivers of non-small cell lung cancer. In addition to showing the benefit of entrectinib against cancers caused by these fusion genes, these results highlight the importance of genetic testing in NSCLC, especially when patients are diagnosed with the condition in the absence of other risk factors,” Doebele says. “Only by testing for genes like ROS1 and NTRK can we match these genetic drivers of cancer with drugs like entrectinib.” 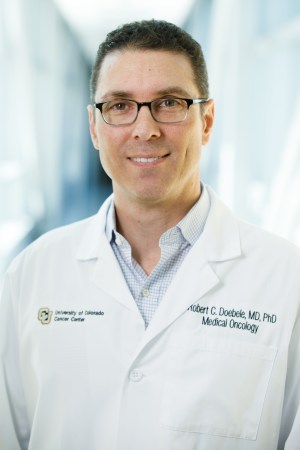