Home News Former and current CU Cancer Center Directors, Bunn and Schulick, describe how research and philanthropy will beat cancer back to News

In the years since Richard Nixon signed the National Cancer Act in 1971, the overall five-year survival rate for patients diagnosed with the disease has risen from about 50 percent to almost 70 percent. Adding the influence of improved cancer prevention (especially the more than 50 percent reduction in smoking since 1964), combined with better screening and better therapies, makes an overall decrease in the cancer death rate of 27 percent just since 1995. Here, for May’s Cancer Research Month, we speak with University of Colorado Cancer Center Founding Director, Paul Bunn, MD, and current CU Cancer Center Director, Richard Schulick, MD, MBA about the innovations that have driven these improvements and the challenges that remain for the future of cancer research and treatment.

CU Cancer Center: Let’s start with a simple question – what do we know now that we didn’t know then?

Bunn: Well, in 1971 when Richard Nixon signed the National Cancer Act the expectation was that cancer would go away by 1980 or so. What we know now is that it takes a long time to go from a basic discovery to a prevention or treatment strategy.

Schulick: In the 1970s we were trying to figure out things we take for granted now. What we call “cancer” is hundreds or even thousands of related diseases, defined more by the genetic changes that create them than where they live in the body. And tumors themselves are more complex than we imagined – a single human tumor can have 300 mutations or genetic changes. In the 1970s we didn’t know any of these genes; now we know some of them. One thing hasn’t changed: Research was hard in the 1970s, it’s hard today, it will always be hard.

CU Cancer Center: In addition to understanding more about the biology of cancer, has the way we go about cancer research changed?

Bunn: When chemotherapy came along in the 1940s, it came from plants and plant alkaloids – the government was screening thousands of natural compounds to see what would kill cancer cells. But that screening approach didn’t work. We didn’t stumble onto a cure. Now we know that the chance you’re going to find something without science is very low.

CU Cancer Center: Are there examples of drugs or techniques that are based on this ground-up approach of starting with the science?

Bunn: People think it’s all new drugs, but the fact is that even radiation and surgery are nothing like they used to be.

Schulick: But in terms of new drugs or treatments, even 10 or 15 years ago people would have said that immunotherapy was dead – that it was an idea that didn’t work out. It was understanding things like how tumor cells hide from the immune system, or how to engineer immune system cells to attack cancer cells, that have made immunotherapy a revolutionary treatment for many forms of cancer.

Bunn: Also, targeted therapies are designed from the ground-up. You find a genetic change driving a certain subtype of cancer and then design a drug to target this change. We’ve gotten more rational, or at least more rational than screening compounds to see what works.

CU Cancer Center: What do you think are the immediate goals for cancer research? What specific knowledge or tools would allow us to continue accelerating the pace of new treatments?

Bunn: One of the main issues in immunology is that we don’t have good animal models that we can use to test new treatments. Most animal models use immunocompromised mice – you can only grow cancer in a mouse model if you first suppress the immune system. But you can’t test immunotherapy in a model without an immune system. We need to find good preclinical models.  In addition, some patients have huge benefit from current immunotherapy while others have little or no benefit. We need better predictive markers before treatment to determine which patients will benefit. And we need a better understanding of the reasons that some do not benefit so we can improve the treatments for them.

Schulick: Even in mice with intact immune systems, you can cure them easily but the same treatment might not work in humans. The mice we deal with are so homogenous and everything is controlled, you can perturb things a little bit and you get a result. Humans are different – it’s logarithmically more complex.

Schulick: For pancreas cancer, it was three percent and now it’s eight. It is not enough to be satisfied with, but it is a start. Unlike diseases like lung cancer or melanoma, we don’t have an effective immunotherapy yet.

Bunn: And you don’t have early detection.

CU Cancer Center: So, it sounds like despite these gains, more work is needed. What do you see as the challenges or barriers that keep us from moving faster against cancer?

Schulick: Look, we’ve even lost ground in a couple cancers – uterine and cervical.

Bunn: Where we’ve lost ground is in implementing things we know work, like HPV vaccination and lung cancer screening. We’ve lost opportunities to detect and prevent cancer. How is it that young people don’t get HPV vaccination that can prevent cervical cancer and some head and neck cancers? How is it that someone at high risk for developing lung cancer doesn’t get the recommended screening?

Schulick: Also, cancer research has gotten more expensive. In the 1970s, to get equipment together maybe all you really needed was a refrigerator, a centrifuge and reagents. Now you need $10 million to buy the technology just to get started. In the 1970s a lot less was known, so you could gain a lot of ground with a straightforward experiment.

Bunn: The reality is that because costs are higher than inflation and research support is not higher, the actual value is probably less. For example, we got a SPORE grant in lung cancer in 1992 and the dollar amount now is basically the same. Before, everybody had four projects going on and now everybody can only afford three.

CU Cancer Center: So, what is the path forward?

Schulick: I like the words of our Vice Chancellor of Advancement, Scott Arthur. Scott says that cancer research on this campus is like a rocket. But rockets need rocket fuel. In terms of funding, NIH support has actually gone down during periods in the last few decades, so philanthropy will have a heavy hand in the pace we beat cancer. How fast do people want us to go? The more support we have, the faster we can get where we want to be.

Bunn: In terms of new things we can do, one of the most important is multidisciplinary care – it’s incredibly important to have the pathologist, oncologist, radiation oncologist, surgeon, radiologist and other specialties in a room together talking about how best to approach a case. This is happening more and more at NCI-designated cancer centers, but by and large doesn’t happen in the community.

Schulick: I think about our opportunities to advance cancer treatment along four lines: Prevention, early detection, better treatments (including chemotherapy, radiation, surgery and immunotherapy), and the fourth is pairing the right treatment with the right patient. That last one is about bioinformatics – personalized medicine – instead of treating all patients with, say, lung cancer, the same way, separating them into the hundreds of cancers they really are and treating each one individually. Instead of seeing a nail and hammering it on the head, you treat each person differently based on obtainable information and tailored to their specific cancer.

CU Cancer Center: Other than philanthropy, these ideas we’ve talked about seem to involve researchers, doctors, hospitals and governments. Is there anything regular people can do to help cancer research?

Bunn: Sure, there’s patient education around clinical trials. Since we started CU Cancer Center, the number of patients entering clinical trials here has increased every year. Now it’s between 10 and 20 percent. But nationwide only about two percent of cancer patients go on a clinical trial.

Schulick: It’s rare that I meet a cancer patient who, after you talk to them, they don’t want to participate. Most people after they hear that they have an opportunity to do something for future patients and that there is a chance it could them, personally, they’re happy to participate. One problem is that there are many practitioners that don’t have any motivation to put patients on clinical trials.

Bunn: Some can’t – they don’t have the support to do it.

Schulick: And that’s why one of our major goals is to increase access to clinical trials. We’re the only NCI-designated comprehensive cancer center in this part of the Rocky Mountain region. It’s our responsibility to bring our experts and expertise closer to populations in our state and beyond who could be participating in clinical trials.

Bunn: Right, and another threat is that some people due to where they live or to socioeconomics are left behind. Even on an industry-sponsored clinical trial, insurance pays for the part that is standard of care, and sometimes insurance doesn’t want to pay. Part of working on disparities is making sure that the fraction of patients on clinical trials is close to the makeup of the community.

Schulick: We have come a long way, but we have a very long way to go. I have to compliment Paul on his vision of establishing a top cancer center and for all of the accomplishments he has led and stewarded.

Schulick: Our physical plant is, of course, never enough, but it’s pretty good. We’re growing. Denver is an easy place to attract top talent. Our cancer center is on an excellent trajectory.

Bunn: This campus is a huge opportunity, especially to make a big difference with philanthropy. Philanthropy is an important driver and it counts. It’s a huge and essential part of the culture here.

Schulick: There’s a time in the future we’re going to beat most cancers, but is that 50 years from now? Is it less than that? The speed at which we get there is proportional to how much we spend on research, training, and care. The choice is ours. 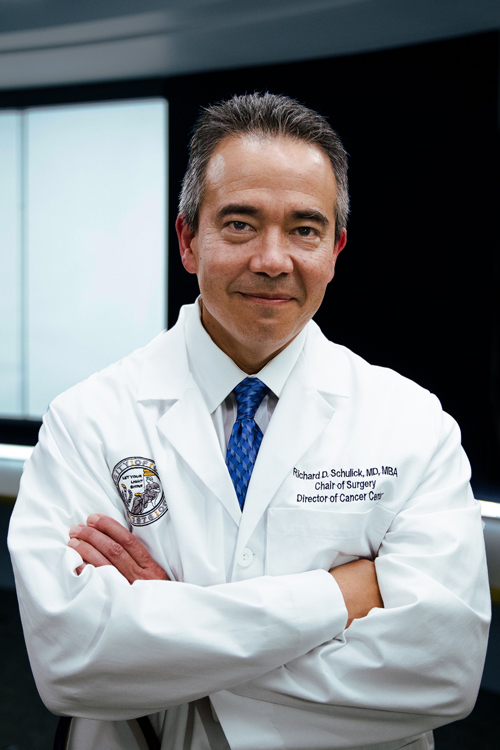 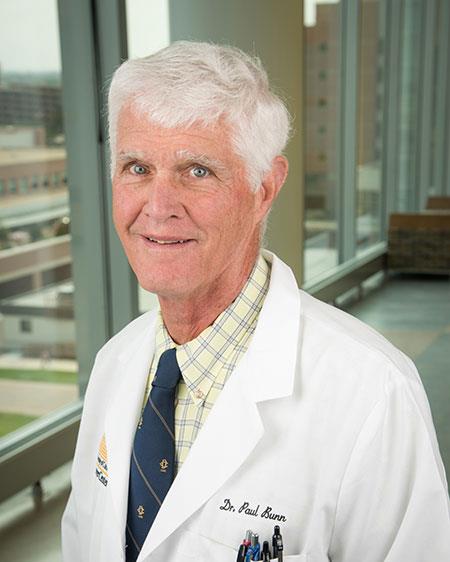