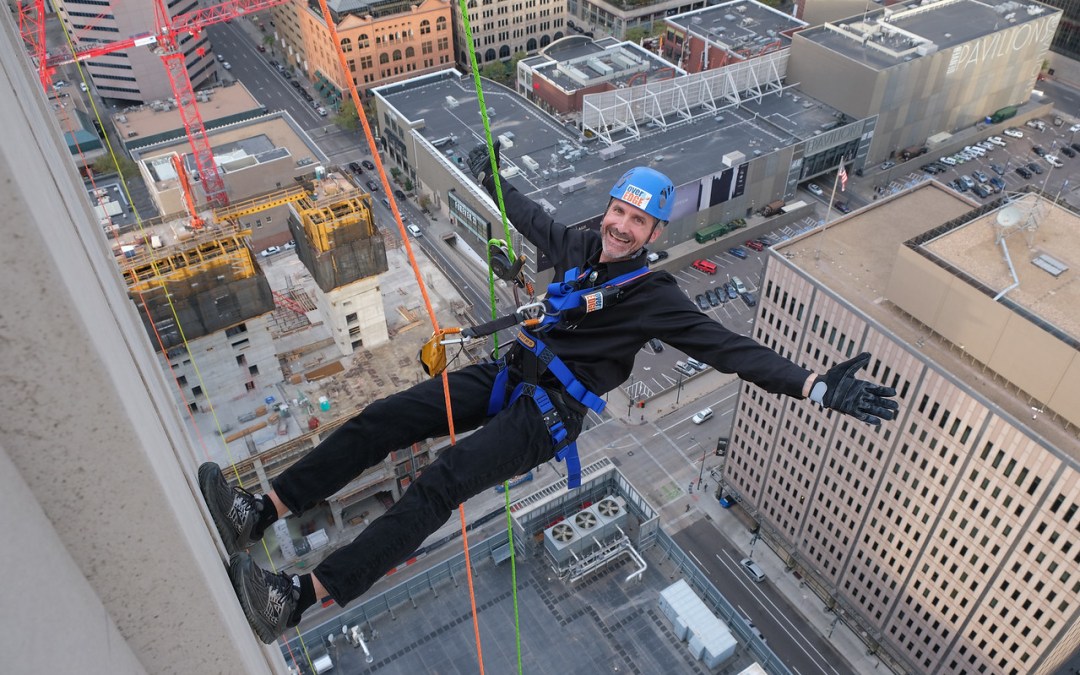 Home News Will you go Over the Edge with James DeGregori, PhD, to help the Cancer League of Colorado? back to News

Since its start in 1969, the Cancer League of Colorado (CLC) has raised over $16 Million dollars for cancer research and patient care in the state of Colorado. Not bad for an entirely volunteer-run organization! Maybe you’ve seen the organization’s Hope Ball, or the Race for Research, or, this year, the first annual Youth Creates Gala, which was held in the Englewood High School auditorium on August 10? Or maybe in early September, you were walking by the Convention Center, looked up at the roof of the Hyatt Regency Denver, and thought to yourself, “Hey, there’s Dinger the Dinosaur falling from the sky!” In fact, Dinger wasn’t falling from the sky – the Rockies mascot along with 192 other intrepid and compassionate souls were rappelling 39 stories from the Hyatt roof in what is certainly Cancer League of Colorado’s most death-defying event, Over the Edge 2019.

“The CLC has supported MILLIONS of dollars for cancer research in Colorado, including numerous grants to my lab. These grants have allowed us to pursue new directions in cancer research, leading to new discoveries that we believe will make a big impact on our ability to prevent, control, and treat this dreaded disease,” DeGregori says.

In fact, this was Dr. DeGregori’s second consecutive year rappelling to raise funds for cancer research. This year, he was willing to not only put his neck on the line, but also his pocketbook, agreeing to rappel even before he had secured the minimum $1,500 in donations (he would be responsible for any shortfall). Fortunately, the CU Cancer Center community came to his rescue, and Dr. DeGregori has now officially raised $1,830 for the event. And the good news is that there’s still time to get involved! Cancer League of Colorado is accepting donations to any rappeler, including DeGregori, until October 31. Longtime CU Cancer Center supporter, Gary Reece, is currently in the lead, though Mike Zitelli of team Wyoming Whisky, and Tina Lovelace of team Woodhouse Day Spa could conceivably finish strong to overtake Reece in the event’s waning minutes of fundraising).

“I’m absolutely terrified, but I did it anyway. Maybe it helped that I promised to pledge an extra $500 donation if I chickened out,” says DeGregori.

So far, the even has raised $332,642 and hopes to top $360,000 when all is said and done at the end of the month. These funds go directly toward research grants, service grants, and investigator initiated clinical trials. In the past, Cancer League of Colorado has directly funded trials including immunotherapy for relapsed women’s cancers, precisely targeted radiation therapy for pancreatic cancer, and even an innovative study exploring whether grape seed extract could slow the growth of watch-and-wait prostate cancer. Research grants have included (among many others), explorations of the intersection between obesity and cancer, a study defining the molecular damage of tanning beds, and a project looking at single cells within tumors to see how many different kinds of “cancer” are within any given cancer.

In other words, CLC funds go directly to projects that improve treatments for patients in Colorado and beyond. Many of these projects would never happen without CLC support.

So join us in donating in these last few weeks of fundraising to Dr. DeGregori or any of the other brave folks who participated in this year’s event. We may not realistically be able to help Dr. DeGregori top the leaderboard, but we can help to ensure that his studies and others at CU Cancer Center continue to make important advances against the disease.

Besides, we’d like him to do it again next year… 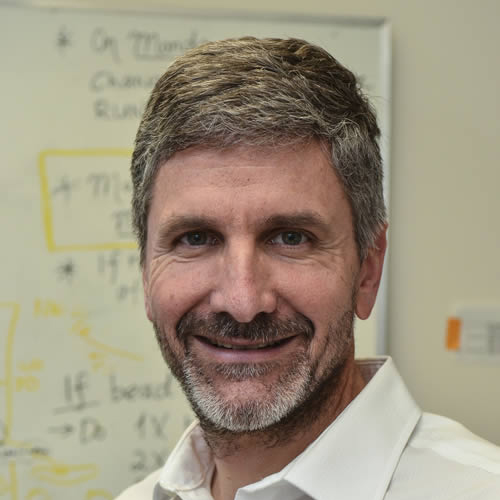