University of Colorado Cancer Center member Erin Schenk, MD, PhD, has been named one of the CU School of Medicine 2022 Translational Research Scholars and received four-year grant support to facilitate exploration and new lines of research.

This recognition will support the continuation of research aiming to collect and test tissue and blood samples from patients with lung cancer through their treatment. It will also support Schenk, her laboratory and collaborators as they conduct animal modeling to learn whether changes that occur in the immune cells of patients who receive targeted therapy can also be observed in animal cells.

“Institutions that are successful in moving the needle in translational research have infrastructure that allows for the collection of samples. With this resource, we can support researchers who are investigating new approaches in lung cancer with a repository of annotated samples available to test their idea,” Schenk explains. “The goal is to develop a clinically relevant biorepository, so as technology and questions evolve, we have samples available.”

Schenk’s research dovetailed with this goal as it builds on a pilot project initially supported by the CU Cancer Center’s Thoracic Oncology Research Initiative (TORI) to advance lung cancer research. The project was an ongoing, prospective biospecimen protocol in which tissue and blood samples were collected from patients with cancer at clinically relevant time points, including diagnosis, first scan, and progression.

The TORI funding supported Schenk and her co-researchers in performing mass cytometry on the collected patient samples, an approach that allows investigators to study immune cell identity and identify biomarkers in cancer, through the CU Cancer Center Flow Cytometry Shared Resource.

“Those preliminary analyses demonstrated really notable changes in immune cells in patients who started targeted therapy,” Schenk says. “Now we’re asking if these same changes occur in animal models after receiving TKI targeted therapy. Through blood draws and samples from other organs we’ll determine if this shift we observe in patients is seen in animal models as well, and begin understanding whether it reflects changes that are occurring in the tumor itself.”

The significant shift that Schenk and her co-researchers observed happened in innate immune cells – which include dendritic cells, monocytes, and macrophages – had not been previously reported. Innate immune cells comprise populations of white blood cells and are part of the innate immune systems, one of the body’s first lines of defense.

“Fundamentally, this study of dynamic immune cell shifts with treatment will be the first of its kind for patients starting targeted therapy for lung cancer,” Schenk says. “The first major question as we analyze additional patient samples is, are we finding an association with patient outcomes? These samples are from patients we’re seeing in our clinic, who’ve so generously contributed to this research, and we can readily connect to their outcomes of targeted therapy. One of our goals is to see if there’s an observed shift in blood cells that’s connects to with how well people do in treatment. Is this a predictive marker in response to therapy?”

Schenk adds that a second goal of the research “is better understanding mechanistically why these shifts occur, what’s going on in tumors, and why it matters with response to targeted therapy. If we can find a signature that associates with outcomes, then we have identified a new set of potential targets in this groups of patients. 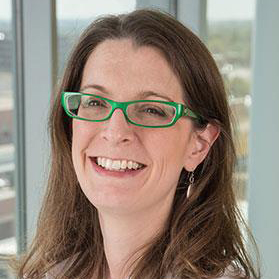