Nine-year-old Danner Plumhoff is rattling off a list of her summer plans. Many of these activities wouldn’t have been possible for her last summer, when she was fresh off an intensive craniofacial surgery. It was her biggest surgery to date, but as a child with a rare variant of Crouzon syndrome, it was hardly her first.

From labor to Flight For Life

Danner was born in June 2012 at Montrose Memorial Hospital, about five hours southwest of Denver.

“No one had detected anything unusual before I went into labor, so it was a bit of an emergency when the doctors saw the shape of her head and she couldn’t breathe through her nose,” says Danner’s mother, Sara Plumhoff. “They hadn’t seen anything like this in our small town, so the Flight For Life team was called.” Danner was intubated, driven to Grand Junction, and then flown to Children’s Hospital Colorado (Children's Colorado) in Aurora. Sara was still healing from her cesarean section, and there wasn’t room for Danner’s father, Jim, on the flight, so he drove to Grand Junction and then flew to Denver, arriving late that night.

At Children’s Colorado, Danner was cared for by a team of pediatric specialists who explained that she had multiple-suture craniosynostosis, a condition where some of the bones of the skull prematurely fuse together. Because she was having trouble breathing, Danner received a tracheostomy at just two days old to give her a stable airway.

“Twenty-one days and a lot of trach training, joy, and fear later, we took Danner home, with a suction machine and a suitcase full of supplies,” Sara says.

What they didn’t take home with them was a diagnosis explaining Danner’s condition, which, in addition to the craniosynostosis, included mild Chiari malformations (structural defects in the base of the skull and brain), midface hypoplasia (undeveloped upper jaw, cheekbones, and eye sockets), narrow sinus passages, hydrocephalus, strabismus (an eye muscle disorder), a severe underbite, and a floppy soft palate.

“The geneticist at Children’s Colorado told us that, due to the symptoms she had, he was about 97% sure Danner had either Crouzon or Pfeiffer syndrome,” Sara says. “But all the genetic testing came back negative.”

Relying on a “superstar” team

“We have a superstar team at Children’s Hospital,” Sarah says. “It's been pretty special, because they've been with Danner since she was about a day old.”

Two key members of Danner’s team are Brooke French, MD, an associate professor in the University of Colorado School of Medicine’s Division of Plastic and Reconstructive Surgery, and Corbett Wilkinson, MD, an associate professor in the Department of Neurosurgery. Before she was even 14 months old, Danner had two major surgeries with French and Wilkinson to open the front and back of her skull to allow room for her growing brain and to move her forehead and orbital bone forward to protect her eyes. Wilkinson also gave Danner a ventriculoperitoneal shunt to combat her hydrocephalus.

“So many of her early surgeries were to prevent harm and actually save her life,” French says. “Then, as she got a little bit older, we started to do things to try to improve her facial balance and function.”

Despite all the procedures, Sara says Danner was a healthy and happy infant, achieving the regular childhood milestones and even learning some sign language, since she couldn’t speak with the trach. At a little over a year, Danner’s breathing stabilized enough to remove the trach.

“That was the best day ever,” Sara says. 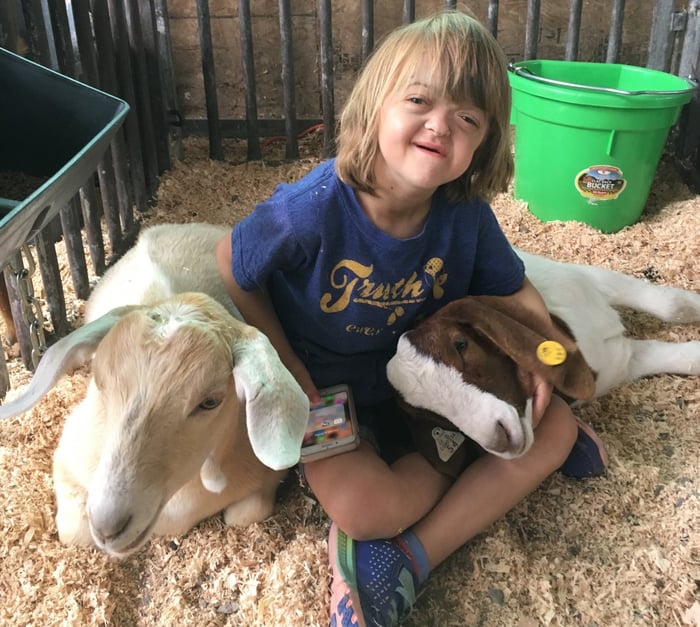 Danner with two of her family's goats.

More procedures continued as Danner grew. Between the ages of 4 and 6, she had surgery to correct the strabismus in her eyes, another surgery to remove her adenoids and tonsils, and multiple sleep studies.

“Danner has always had horrible sleep apnea,” Sara explains. “Her airway was severely constricted, and her palate was soft and floppy, which made it difficult for her to breathe during sleep. Many nights, I laid in bed willing her to take her next breath. She always did, but it was scary.”

Although Danner’s treatment was going well, Sara still longed for a diagnosis to better understand what her daughter was going through. When Danner was around 6 years old, she visited Children’s Colorado to meet with an endocrinologist and a dermatologist.

“She was still small,” Sara says. “We had a hard time getting her over 30 pounds. And she also had some darkening of the skin that was unusual.”

The endocrinologist diagnosed Danner with a skin condition called acanthosis nigricans, adding that it was sometimes associated with Crouzon syndrome. When Sara explained that Danner had already been tested for the syndrome, the endocrinologist told her that this variant of Crouzon syndrome was extremely rare and located on a different gene, making it impossible to detect in the standard genetic test for Crouzon.

“Instantly, I knew we had found her diagnosis,” Sara says. “We had another round of genetic testing performed and sure enough, it was positive.”

Sara describes finally getting a diagnosis for Danner as “the moment that everything changed, and nothing changed.”

“I joined a Facebook group for parents of children with Crouzon and was able to reach out to them for support and advice. But in Danner’s world, nothing changed.”

Throughout their medical journey, Danner and her parents knew she would eventually need to have what they call her “big surgery” to fix her airway, align her jaw, and move the bones of her midface forward (called a distraction). In 2019, the Plumhoffs and their team at Children’s Colorado decided it was time.

“It’s a surgery you have to save for at least a few years of age, because if you do it too young, there’s a higher chance you’ll have to re-do it,” Wilkinson explains.

The nine-hour surgery — called a monobloc — took place at Children’s Colorado on January 9, 2020. But a lot of planning and preparation went into it before that.

“Dr. Wilkinson and I did what’s called a virtual surgical planning session, where we used her CAT scan to practice her surgery online ahead of time to identify any potential issues,” French says. The team also had 3D printed mockups of Danner’s skull to help them decide where to make the surgical cuts and to plan how far to distract her midface and forehead.

Danner was intubated in the ICU for close to five days, then spent another five days in the hospital recovering after her procedure. She left with a purple halo device (called a rigid external distraction device) that was attached to her skull and connected to her jaw and forehead with wires. The Plumhoffs were taught how to twist the screws on the halo to slowly move her face forward over the next couple of weeks. After that, she wore the halo for another four months while her skull and face healed. 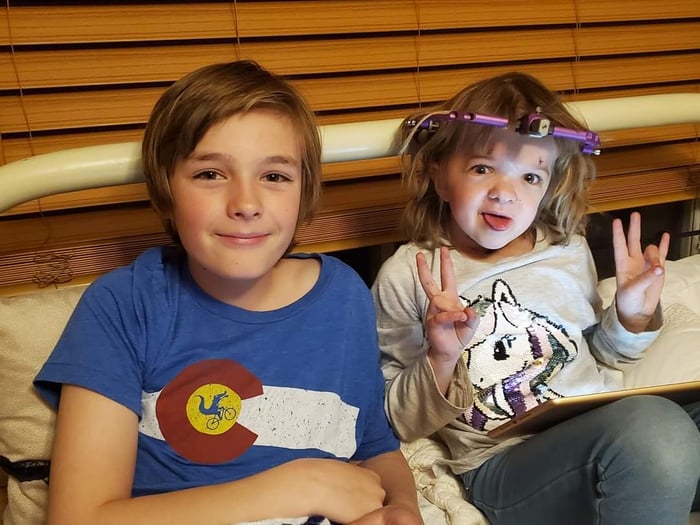 Danner spends time with her older brother, Willem, while wearing her halo device.

“These must have been the worst months of Danner’s life,” Sara says. “She couldn’t eat anything except liquids for a while, she had the halo attached to her face, and she was in a lot of pain. She also lost her personality for a while. I’d say it took about six months for Danner’s personality to really come back.”

Luckily, Danner doesn’t seem to remember too much from this time, aside from the frustration of not being able to play with her many animals and the endless parade of liquid meals — blended pancakes were her favorite, while she describes liquified macaroni and cheese as “bleh.”

After they returned to Montrose, the Plumhoffs relied on their doctors to help them through the recovery period.

“Any time we had issues, we would contact the doctors and all of a sudden, we’d be talking to Dr. French on a Saturday morning over Zoom,” Sara says. “They’ve been able to do so much with us remotely, which is huge since we live in such a rural area.”

In fact, when one of the wires on Danner’s halo snapped, Dr. French was able to send the Plumhoffs a new set and then walk them through replacing it over a video call.

“With any other family, I probably would have urged them to come in so that I could take care of it, but Jim said, ‘Doc, I can do this.’ And he did.” French says. “I’m so impressed with all of them. And I know they put a great amount of trust in us, for which we're extremely thankful.”

Aside from the cosmetic changes, Sara says the biggest change since the surgery is that Danner finally began to grow. Her height shot up by four inches in just a few months, and she began to put on weight. 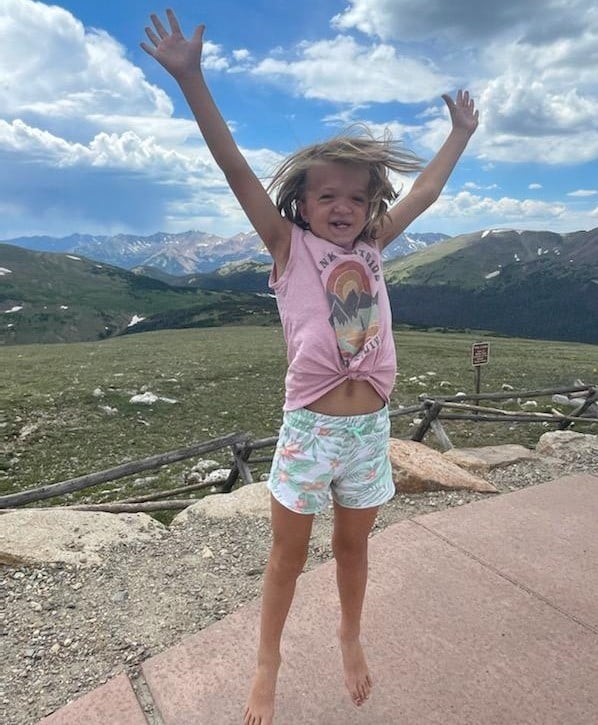 Going forward, Wilkinson and the neurosurgery team will continue to monitor Danner’s shunt every year, but French hopes she won’t need more craniofacial surgery. Instead, Danner’s treatment will focus primarily on orthodontics and overcoming her persistent sleep apnea.

“She’s been through a lot, especially for someone her age,” Wilkinson says. “But she’s a spunky kid, and she used that spunkiness to get through it.”

When asked what advice they’d give to families facing a similar situation to theirs, Jim and Sara say, “trust is important.”

“Trust in your team of doctors and in your child,” they say. “For us, when Danner’s doing great, we’re doing great.” 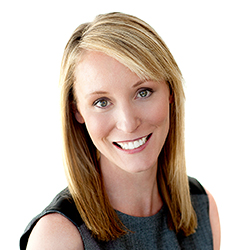 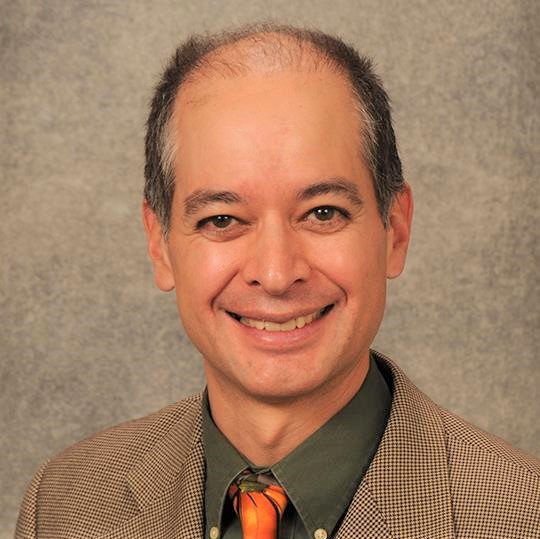