Almost a decade into his medical career, amid the daily traumas of war, Mohammed Al-Musawi, MD, began to love his job.

At the time, during 2004 and 2005, Al-Musawi, a research instructor of cardiothoracic surgery in the University of Colorado School of Medicine Department of Surgery, was chief resident of cardiothoracic surgery at a hospital in central Baghdad, Iraq. Every day, casualties from explosions and violence roiling the country flooded into the hospital, and Al-Musawi and his colleagues rushed to save lives.

“I was realizing how much difference you can make every day, saving life and limbs of innocent people,” he says. “It was very hard, but every morning I got to the ward and saw what we had been able to do for people.”

Now, as he continues his medical career in the United States and joins the Division of Vascular Surgery as an integrated vascular surgery resident, Al-Musawi says he feels “excited for these new opportunities, and grateful for so many people who have supported me.”

Choosing medicine to honor his parents

Al-Musawi wasn’t always enthusiastic about being a doctor. Growing up in Iraq’s eastern Diyala Province, a region famed for its citrus groves, he wanted to be an engineer or an architect. Because Iraqi schools follow a British system of entering professional school right out of high school, Al-Musawi had been thinking about pursuing engineering.

“But I noticed my mother and father would like me to be a doctor,” he remembers. “They didn’t force me to do that; they just asked, ‘Why don’t you apply for the school of medicine?’ In my culture, it is very important to satisfy your parents because, well, they’re your parents. It’s not a big deal to change your school to feel you’re supporting them, and I’ve never regretted my decision because it made my parents happy.”

After graduating medical school, he served as a doctor in the Iraqi army from 1996 to 2003. He also applied and was accepted into a cardiothoracic surgery training program, and in 2003 began a rotation in a civilian cardiac center in Baghdad. On March 20 of that year, U.S. President George W. Bush announced that U.S. forces had begun a military operation into Iraq.

“We were told that in a couple of days there would be a war and received a message that all the army doctors should go back to the army,” Al-Musawi says. “I decided that I would not go back to the army because I didn’t want to support the dictator in his last war. I couldn’t declare that because I would be executed immediately, so I took the risk and went home.”

Al-Musawi’s parents supported his decision, and they talked in hypotheticals about what he would do if Saddam Hussein was not ousted – how Al-Musawi would flee the country and where he could go.

However, the allied military operation toppled Iraq’s governing dictatorship in a matter of weeks, and Al-Musawi felt safe enough to return to Baghdad and the hospital at which he’d been working. When the existing Iraqi military was disbanded in May 2003, Al-Musawi was offered the opportunity to become a civilian doctor.

At the time, he couldn’t have known the brutality that would come, fueled by Al Qaeda violence and countrywide acts of terrorism. Still, in the stress and horror of the casualties he treated, he found his love for medicine.

Al-Musawi also began collaborating with U.S. Army doctors. “One day, the chief resident came, and he said, ‘We received a phone call from the U.S. Army combat support hospital in Baghdad, and they were asking to meet with Iraqi surgeons from our hospital.’ He asked, ‘Who would do that?’” 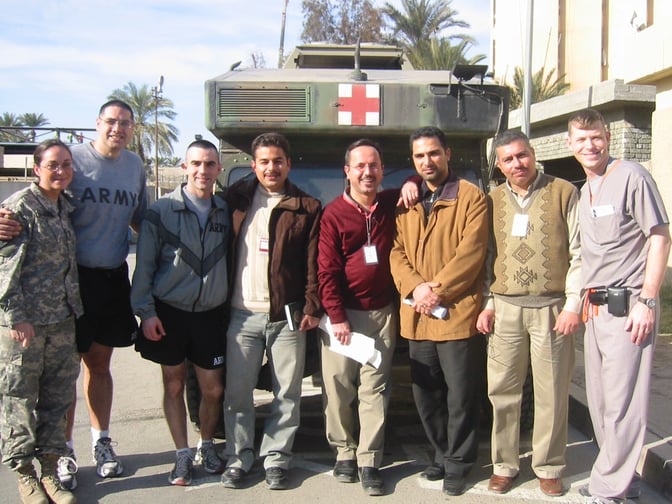 The U.S. Army medical team promised to send supplies back with Iraqi surgeons who met with them, so Al-Musawi said he would go because the hospital desperately needed supplies. The U.S. Army hospital was in a secure green zone, but approaching it could mean risking attacks and suicide bombings. The promise of supplies justified the extreme risk, Al-Musawi says.

“That was my first meeting with U.S. Army doctors,” Al-Musawi recalls. Among them was Charles “Chuck” Fox, MD, former chief of vascular surgery at Denver Health Medical Center and associate professor of surgery in the CU School of Medicine, now at the University of Maryland School of Medicine. The two men became good friends.

“Their request was, ‘Hey, we operate on U.S. soldiers and Iraqi casualties, but we don’t have enough beds. If you guys are OK with receiving Iraqi casualties for post-op follow-up, every time you come and take Iraqi post-op cases we will give you surgical supplies,’” Al-Musawi recalls. “Every weekend, I would take eight, 10 ambulances with me and fill them with post-op patients, and also stay the morning and make rounds with the U.S. surgeons.”

Planning a move to the United States

In 2006, after about six months of collaboration, Fox told Al-Musawi that he was heading back to Walter Reed Army Medical Center in the United States. Al-Musawi brought Fox some carved wood mementos representative of Iraq, thinking he’d never see Fox again. However, in 2011, while Al-Musawi was in Scotland pursuing a master’s degree in medical education, Fox reached out and invited him to speak about treating vascular trauma during war at the Society for Vascular Surgery annual meeting.

This time, Al-Musawi brought Fox a special gift: the carved wooden flute he’d hoped to learn to play during the early days of the war, when he was trapped for weeks at a time at the hospital, but never had the chance. Again, he thought he’d never see Fox again.

By 2015, however, the terrorist Islamic State, or ISIS, had seized control of several provinces in a matter of days and was initiating violence across the country. Fox messaged Al-Musawi, who by that time was director of a heart disease center, and asked if Al-Musawi was safe. He wasn’t.

“I was volunteering with the army in the battlefield, and I was director of the heart center, which means I was in the spotlight,” Al-Musawi explains. His wife, Rana, a pharmacist, was terrified sending their oldest son, Ali, to school every day, and dreaded the day their younger two sons, Hassan and Zain, would become school age. She begged him to find a way for them to leave Iraq.

While attending the annual American Society for Thoracic Surgery conference in Baltimore, Maryland, in 2016, Al-Musawi thought about reaching out to Fox, but was worried because he didn’t want Fox to think he was taking advantage of their friendship. He also knew that his medical credentials wouldn’t be recognized in the United States, and he would have to rebuild his medical career.

Because the situation in Iraq was deteriorating so quickly, though, Al-Musawi finally decided to reach out to Fox while Al-Musawi was in Baltimore, asking if Fox knew of any open research positions. Fox advised Al-Musawi to find David Fullerton, MD, chief of cardiothoracic surgery in the CU Department of Surgery, at the conference, at which Al-Musawi was speaking. Al-Musawi wasn’t able to find Fullerton amid the thousands of attendees, but Fox emailed a week later and said Fullerton wanted Al-Musawi to come to CU.

Thriving in a new life in the United States

The process of getting a U.S. visa didn’t happen quickly, but it did happen. Al-Musawi emailed Fox imploring him not to feel pressured to help, acknowledging that the political climate in the United States concerning Muslims was fraught, “and I didn’t want to embarrass him with his university,” Al-Musawi says.

But in April 2017, Al-Musawi and his wife had an email approving their visa application, which they took to the U.S. Embassy. A short interview later, they had H-1 visas in hand and in September 2017 the family moved to Denver. Leaving Baghdad was extremely difficult, not knowing when or if he’d see his parents again, but when the family landed in Denver “there was Chuck (Fox) and his wife, Kathy, waiting for us, helping us like we were their own family. They even helped provide furniture for our new apartment,” Al-Musawi says. 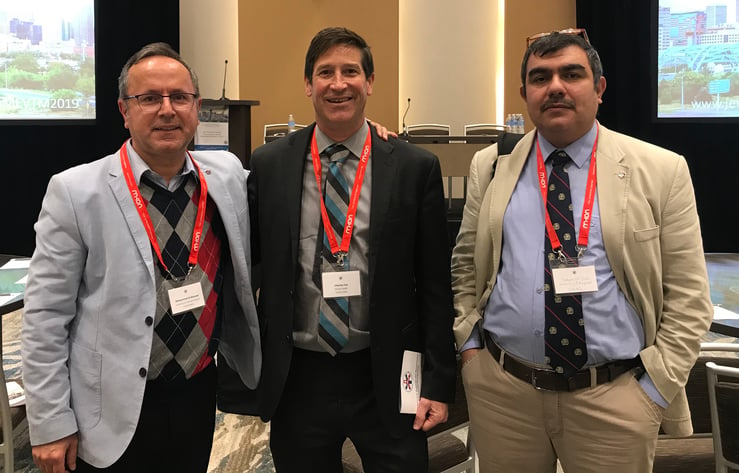 Mohammed Al-Musawi, MD, (left) with Charles Fox, MD, (center) and Sabah N. Jabir of the University of Baghdad at a vascular surgery conference in Denver, Colorado, in 2019.

Less than a month later, Al-Musawi began his position as a research instructor in the Department of Surgery Clinical Trials and Research Office.

Al-Musawi immediately began studying for the U.S. Medical Licensing Examination, managing to pass the first exam with high scores even though he’d just received the news of his mother’s pancreatic cancer diagnosis. He had to reschedule his second exam, which he ultimately passed with high scores, because he received word of her death. Al-Musawi was even undeterred by emergency kidney stone surgery two weeks before his second exam in 2021.

During his recovery from surgery, he learned he’d been awarded the five-year vascular surgery residency. It was welcome news, especially as his father had died four months following his mother and Al-Musawi was feeling significant grief.

“When you’re in the deepest level of sorrows, I believe life finds ways to make it easier for you,” he says.

He and his family have thrived as they’ve adapted to life in the United States. His sons love their schools and, during a visa renewal trip to Los Angeles before getting their green cards, Rana said she missed Colorado even though they were away for only a day. She declared she would kiss the ground in Colorado as soon as they landed back home. Al-Musawi credits Rana's sacrifice, unwavering support and courage for his and his family's success in navigating the challenges of moving to a new country.

Even during the rare moments when he might feel a touch of melancholy that he’s not yet practicing a fraction of the medicine that he practiced in Iraq, he says he thinks about the beauty of his family’s life here, and the support he received in bringing his family to safety.

“Every now and again I go home and tell my wife, ‘I don’t know if I’m surrounded by human beings or by angels,’” he says. “The people here in the department are so kind to me and so supportive, this is like God sent those people my way. It was a little frightening coming here, being Muslim and since my name is Mohammed, but all I’ve received is kindness and support. Every day I’m grateful for this blessing for me and my family.” 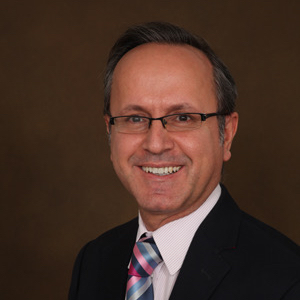