Matthew Bartley, MD, MS, has gone viral (as in trending in the world of social media).

The CU Department of Surgery resident visited his 5-year-old son’s classroom on June 18 to talk to the students about what it’s like to be a doctor. The photo he tweeted of the occasion quickly spread — first among his friends and coworkers, then even farther. It currently has more than 35,000 likes.

“I was getting so many notifications, I had to turn off all the Twitter notifications on my phone,” Bartley says with a laugh. 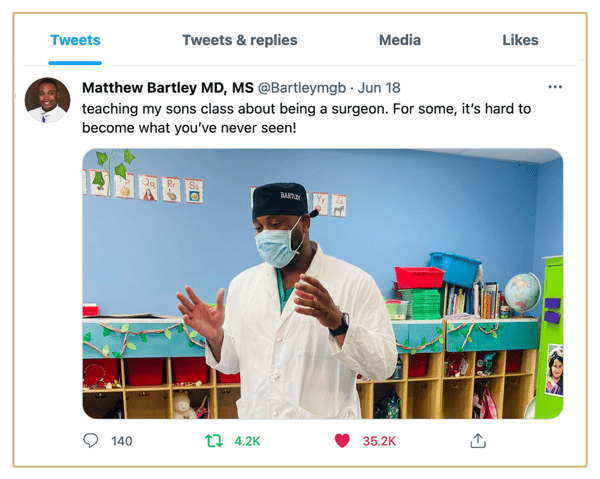 Bartley, who has visited his son’s classroom before and also makes regular visits to local high schools, sees those appearances as important motivation for young people — especially Black males like himself — to get interested in careers in medicine.

“It’s hard to become something you’ve never seen, which is what I wrote on my Twitter post,” says Bartley, a general surgery resident who attended the University of Missouri-Columbia School of Medicine. “I was fortunate to grow up with a father who was in medicine, so I grew up with a lot of Black men around me who were all doctors. When I go to these high schools and talk to a lot of these kids, they’re so amazed that I’m a Black doctor, not to mention a surgeon. A lot of them think they could become a basketball player or a movie star before they could become a doctor.”

As for kindergarteners and grade-schoolers, Bartley says, he’s always amazed at their curiosity.

“I tell them what the day-to-day of being a surgeon is like, and most of them want to know what’s my favorite part of my job,” he says. “I tell them, ‘People come in on their worst day, and I get to help them, and they leave the same or better as when they come in.’ A lot of them want to know if there are other people like them in the hospital, and who do I work with in the hospital — even though they’re 5-year-olds, they’re very inquisitive and fascinated with the job.”

Encouraging the next generation of doctors

No matter the age group he’s speaking to, Bartley never turns down an opportunity to motivate young people and give them encouragement to see themselves someday working as physicians.

“I think it gives them that spark they need to say, ‘Yes, you can do this.’ Here’s somebody who’s done it who’s not very different from you,” he says. “It’s more important to do it when they’re younger, so they really have the idea and mindset that it’s something they want to do. It’s easy once you get into high school, and even college, to have people discourage you and choose something else. If you get it in your head when you’re really young — young people are driven, and they do what they want to do no matter what people say.”

Increased diversity is a primary goal of the CU Department of Surgery’s Diversity, Equity and Inclusion Committee. Formed in fall 2019, the group is examining everything from hiring practices and trainings to mentorship and patient care. Of particular interest is increasing the number of people from backgrounds underrepresented in medicine — women, people who identify as LGBTQ, people of color, people with disabilities, veterans, and people serving in the military.

Bartley is still going through the responses and direct messages that came as a result of that viral tweet — everything from requests to speak at other schools and compliments on his trademark cowboy boots to encouragement from other Black professionals.

“Being the only Black male in the CU surgery program, it made me feel like I have a lot more people out there rooting for me than I think,” he says.