While many parents have excitedly waited for this day –  when COVID-19 vaccines for some of America’s youngest citizens received the official go-ahead – surveys suggest other parents still have questions. CU Anschutz experts with children of their own offer their perspectives surrounding today's vaccine approval for 5- to 11-year-olds and some of the concerns parents have expressed.

According to her dad, Mia McMurray hates needles. The 8-year-old dutifully gets her flu shot every year, but not without dread. So when his daughter jumped at the chance to take part in a clinical trial for the COVID-19 vaccine, Michael McMurray was surprised.

“She does not like shots. But she never showed any hesitation about wanting the vaccine, or about participating in the trial,” said McMurray, PhD, a researcher and associate professor in the Department of Cell & Developmental Biology at the University of Colorado School of Medicine (SOM).

With today’s backing of the Food and Drug Administrations’ (FDA) Emergency Use Authorization (EUA) for that vaccine, 28 million more little Americans have now received the official go-ahead for immunization. The Centers for Disease Control and Prevention (CDC) approved initiation of the rollout today (Nov. 2) after reviewing the FDA’s decision.

If recent surveys prove correct, however, a vast majority of parents – more than two-thirds – plan to opt their little ones out, at least for now. Of that two-thirds, about half noted a wait-and-see approach, as they seek answers on studies, safety, trial sizes, side-effects and the level of risk from COVID-19 for their children.

“They’re just trying to make the best decision they can for their kids,” said Emily Bates, PhD, researcher and associate professor in the Department of Pediatrics Section of Developmental Biology. “And it does look like this is so brand new, right?”

But most of those parents don’t work with RNA and vaccines every day, like she and her colleagues do, Bates said. The mRNA, the base of the Pfizer (and Moderna) vaccines, degrades rapidly and disappears from the body, leaving only its instructions to fight SARS-CoV-2 in its wake.

The mRNA technology for vaccines has been studied for more than a decade, a chief factor behind scientists’ ability to turn the initial COVID shots around so quickly, experts say. And 420 million-plus doses of the vaccines have gone into people’s arms in this country alone since the pandemic struck, with no sign of long-term side effects.

The same cannot be said for COVID-19.

“You are at much greater risk of long-term consequences from an infection than you are from any vaccine,” said Ross Kedl, PhD, a vaccine expert and professor of Immunology & Biology at CU Anschutz. “There is no debate about that.”

The potential long-term effects of COVID-19 are her biggest worry, said Bates, who intends to get the shot for her daughter, who turns 5 this month, as soon as possible. Unlike the vaccine that rapidly disappears from the body, the virus invades cells, replicates and then invades many more cells, she said. “And it’s damaging tissue everywhere it goes.”

Find updated information on scheduling COVID-19 vaccines for children through the state and Colorado Children’s Hospital or check with your pharmacist or pediatrician.

The state has prepared for the vaccine’s approval for weeks, submitting pre-orders to the CDC for enrolled providers. The vaccine, which will be given in two 10-microgram doses (one-third the adult dosage) three weeks apart, was found nearly 91% effective against infection.

While most infections in children throughout the pandemic have been mild or without symptoms, that’s not always the case, said Eric Simões, MD, a SOM professor and pediatric infectious disease expert who led the Pfizer clinical trial for 5- to 11-year-olds on campus.

“And, unfortunately, there’s no crystal ball that tells us this child will just get the mild disease, and another child will get severe disease and end up in the ICU (Intensive Care Unit),” Simões said.

SARS-CoV-2 infection results in Long COVID or MIS-C (multisystem inflammatory syndrome in children) in 7% to 10% of kids, he said. Both can cause long-term inflammation of the lungs, heart, kidneys, brain and more.

“I have seen several children that I have referred to our long-term care clinic for Long COVID,” Simões said. “And we have a lot of MIS-C at the hospital. I personally saw nine cases of MIS-C in just the last week that I was on service,” he said, noting that half of all MIS-C cases fall in the 5- to 11-year-old age group.

A chief concern among parents centers around myocarditis and pericarditis, inflammation of the heart and its lining, the one side effect that has captured experts’ concern with the mRNA vaccines. Most cases have been mild and seen in males 16 and older.

Post-vaccine heart inflammation needs to be monitored, Simões said, noting that while there were no cases in the recent clinical trials with about 4,600 participants (3,100 vaccine, 1,538 placebo), the trial sizes and durations were relatively small and short.

Experts agree hesitant parents should talk to their pediatricians about their children’s individual cases, keeping in mind overall risks. Those include a higher chance of developing myocarditis from COVID-19 than from the vaccine.

McMurray, whose son was vaccinated on his 12th birthday, said the cardiac risk was not a big worry for him and his wife because the numbers were so small. “From a purely risk-assessment calculation, it seemed like clearly the obvious thing to do.”

Also, parents have more control over cardiac side-effects from the vaccine than from COVID, by knowing what to look for and when to seek care, Bates said. “You have no control with the virus itself.”

Parent concerns about trial size and duration for youth are also understandable, experts say. But, while it’s true kids are not little adults, they do point to the unprecedented number of people who have had one dose of the vaccine: 3.9 billion worldwide.

“So we have a lot of experience with it, and we know the safety issues to watch for,” Simões said.

The two big but rare side-effect concerns so far are cardiac inflammation with mRNA vaccines and blood clots in some Johnson & Johnson recipients. Both showed up within six weeks of vaccination.

“If you haven’t seen it by six weeks, you’re not likely going to see it,” Kedl said of side-effects. “That’s true across all vaccines we’ve looked at since we’ve started vaccinations.”

McMurray and his wife, also a scientist on campus, were convinced of the vaccine’s safety, he said. “And we didn’t suspect, based on anything we had read or heard, that there would be any reason to believe that for younger kids, it would be any less effective or less safe.”

Adding in the contagious delta twist

Parents also might consider the contagiousness of the circulating delta variant when weighing the vaccination decision, Simões said. While the 18-and-under group accounted for 4% or fewer of infections early in the pandemic, the rate recently rose to 25%, he said.

Unvaccinated children also can serve as a reservoir for coronavirus, leading to more variants and endangering the at-risk population, from kids with cancer to their own grandparents, Kedl said.

“That’s a problem. Kids can spread the virus amongst themselves, variants can spin out, and now Grandma and Grandpa are at risk,” he said, adding that kids and schools serve as reservoirs for many infections each year, including the flu.

Benefits move beyond the physical

Despite her needle phobia, Mia, like her brother, “could not wait to get vaccinated,” McMurray said. And the benefits for his kids go beyond the physical.

“They are of the idea that the vaccine is a way to be both personally responsible for your health and also a way to help others.” And, after the challenges of the past nearly two years, including virtual schooling with two parents working, the family is also ready for a move back toward normal, he said.

“It’s hard to express just how happy they are being back in school,” he said of Mia and son, Luca. “They are absolutely loving it. They did okay in virtual school, but the difference is dramatic. And we know that it’s really what’s best for them.”

Photo at top: At left, Professor Ross Kedl’s youngest daughter, Nora Kedl, shows off her bandage after receiving her vaccine at age 11 during the recent clinical trial on campus. At right, his oldest daughter, Elizabeth Kedl, 14, receives the vaccine soon after it was approved for her age group. 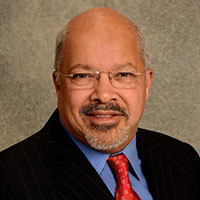 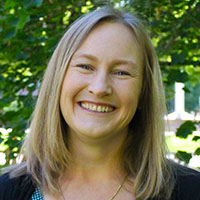 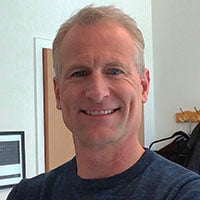