Home News Can Psychedelic Therapy Offer a Sense of Peace for the Dying? back to News

A CU Anschutz Medical Campus expert explains how hospice and palliative care patients describe the existential dread that comes with terminal disease and how psychedelic-assisted therapy could help fill a longstanding gap in care.

It’s a question palliative care provider and instructor Jonathan Treem, MD, fields so often, he derived an analogy in answer.

It’s like being in a perpetual horror movie, where a killer lurks inside your home, he says. You’re the main character, alone with the murderer, who lies in wait. As you creep from dark room to dark room, searching for a monster sure to overpower you, the dread builds.

“You never know when that thing is going to jump out at you or where it’s going to happen,” said Treem, an assistant professor of internal medicine at the University of Colorado School of Medicine, who specializes in hospice and palliative care. “That sort of dread generates an incredible amount of stress, a stress that manifests all over a person’s life: in their professional life; in their personal life; in their sleep.”

The physical and mental toll of that persistent nightmare, coupled with the existential fears that invade people’s minds when confronting death, can be huge, but the treatment options are minimal, Treem said. That’s why he and some of his colleagues at the University of Colorado Anschutz Medical Campus are proponents of advancing psychedelic-assisted mental health therapy and research, something one initiative headed for Colorado's November ballot would help do.

A powerful tool for aiding the dying?

As interest in psychedelic-assisted therapy for issues that plague the country – from debilitating depression to deadly addictions – grows, research and patient anecdotes suggest the approach could be a powerful end-of-life tool.

The mind-altering experience induced by hallucinogens appears to calm that dread, based on prestigious university studies he has read and accounts from his own patients after experimenting with drugs, such as psilocybin (the hallucinogenic component of psychedelic mushrooms), Treem said.

Labeled a “potential breakthrough” in some palliative care journals, Treem said the therapy could be the “holy grail” for arguably life’s hardest challenge – accepting death.

Conquering the agony and fear

“There seems to be a relaxation of that very fear, that idea that you are walking around in that house and death exists in that house, but you are not afraid that it will jump around the corner. In fact, you know it will, and you accept that. It becomes essentially a part of reality itself, and it doesn’t generate fear.”

Research out of Johns Hopkins University and New York University have shown that even a single session with psilocybin and concurrent therapeutic exercises resulted in “meaningful and persistent reductions” in end-of-life issues, Treem said. Anxiety, depression and the pain and agony over a life that’s ending – which experts term existential distress – subsided quickly, with benefits lasting up to six months among a majority of study subjects.

“Existential distress has its own set of symptoms, and I don’t think antidepression or antianxiety medicines really touch that particular type of distress,” Treem said. “We need other ways to make that time in people’s lives more bearable.”

A major groundswell of support

Two state initiatives could open the door for related research on campus and use of the therapy in the state, Treem said. Initiative 58, labeled the Natural Medicine Health Act of 2022, would legalize the use of  psychedelic mushrooms in designated healing centers if approved in November.

Initiative 61 seeks to decriminalize possession of certain entheogens, or natural psychoactive substances, including hallucinogenic mushrooms. The petition with the required number of signatures has yet to be submitted.

Treem, whose patients ask him about the therapy “all the time,” said the word is out about the potential benefits of psychedelic therapy. “There is a powerful layperson interest. I think that’s actually part of the groundswell of support that’s happening.”

Treem does not condone self-treatment but understands the desire, he said. He educates and counsels his patients who consider it, particularly on safety issues.

‘A tremendous amount more to do’

“The research for what population is best fitted and at what dose for what period of time is at the very beginning stages,” Treem said. “There’s a tremendous amount more to do, but there’s also a tremendous medical interest for a variety of applications.”

Some of his colleagues are seeking funding and partnerships to further research of the alternative therapies in the hospice and palliative care realm, Treem said. Also, in anticipation of new laws, he and colleagues are already working on policy guidance with an eye on ensuring any future treatment remains safe and fair, he said.

“What we call entheogenic therapies have been used for spiritual and mental health purposes by different ethnic communities for literally millennia,” Treem said. “We have a generational wealth of information around what these types of therapies are used for. And they are the same general communities that have been historically disenfranchised by federal drug policy.”

In helping provide a medical scientific perspective as the therapy advances, Treem said it’s important to include ethnic communities in the conversation and to ensure their inclusion in future therapy opportunities.

‘What palliative care is meant to do’

How physiologically psychedelics improve mental health issues remains largely speculation, Treem said. But from peyote to ayahuasca, different ethnic communities have been using hallucinogens for mental health for thousands of years, he said.

If psychedelic mushrooms can help his patients become at peace with death, then he is ready to help move the science forward, Treem said.

“Palliative care is about quality of life, how illness manifests in a person’s life – the physical, mental, social, psychological and spiritual effects. Those things should be equally attended to through the entire course of a person’s illness in partnership with medical providers. What we find with psilocybin is that it brings peace. And that’s what palliative care is meant to do.” 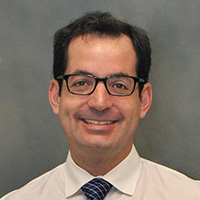