Home News CU Nursing Graduate: 'You Are Not Just a Nurse' back to News

Editor's note: National Nurses Week begins each year on May 6 and ends on May 12, which is the birthday of Florence Nightingale, the founder of modern nursing.

When she competed in Miss Colorado in 2015, Kelley Johnson, RN, wore a gown from Craigslist that was too short for heels. So, she went barefoot.

She borrowed a swimsuit at the last minute and strolled out in her nursing scrubs for the talent competition, delivering a monologue she had scribbled down in the car on the way to the pageant. 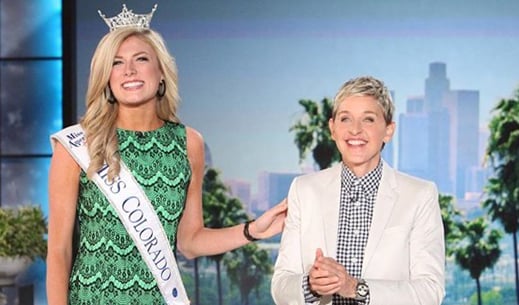 mentioning the comedian in an answer to a judge's question in the Miss America pageant.

She won, and the monologue changed her life.

"Pageantry wasn’t something I was really ever meant to do,” said Johnson, who will earn her Family Nurse Practitioner degree from the University of Colorado College of Nursing this May, even though the COVID-19 pandemic has pushed her chance at the graduation stage off indefinitely (probably in December). “It was about scholarship money.”

Johnson went on to deliver that monologue about the power of nursing in the 2016 Miss America Pageant. She won second runner-up, had her college debt erased, received $10,000 from TV talk show host Ellen DeGeneres for graduate school, and put the spotlight on the nursing profession more than she could have ever imagined.

Today, as her fellow nurses are being challenged in unimaginable ways caring for the sick and dying during a worldwide pandemic, the message Johnson has continued to share since her moment of fame rings truer than ever: You are not just a nurse.

‘Ignorant comments: a blessing in disguise’

Johnson, who grew up in Windsor, was a nursing student in Iowa when she jumped into pageantry hoping to (but not expecting to) earn some scholarship money. Her non-traditional Miss America monologue – a touching, personal tribute to nursing – ignited a national outcry after some women on the daytime TV show “The View” mocked her attire.

“It was such a blessing in disguise,” Johnson said of the “ignorant comments” that caused her email inbox to explode with angry nurses from across the country wanting to thank her for her monologue. “We were given a platform and microphone to really talk about our profession,” she said of the crusade that followed (#NursesUnite). “We were excited to be nurses again.”

Salute the nurse in your life during

And if you're a CU Nurse, celebrate the

"I Am a CU Nurse" campaign by

Johnson, who knew she wanted to be a nurse at age 4 when she watched nurses care for her father who passed away from colon cancer, delivered 80 keynote speeches on the importance of nursing in the three months following her Miss Colorado delivery of that monologue, which earned a standing ovation.

After Miss America and “The View” comments, a media frenzy ensued. “I was on Ellen, Dr. Oz, E! News, Inside Edition, The Doctors. It was just really insane, the outpour,” she said, adding that the nationwide support was the best part of the ordeal.

Major companies pulled advertising from “The View” and channeled the dollars instead to nursing scholarships.

“I still have nurses come up to me and say that they were going to retire, or that they wanted to quit, and that whole scenario inspired them to keep going. They remember why they did this in the first place,” said Johnson, who changed her course and has continued to advocate for nurses as a national speaker (Nurse Kelley) and TV host in California.

While fellow contestants danced and sang for the talent section of the pageant, Johnson chose to share a transformational story about an Alzheimer’s patient she cared for in the hospital.

She recalled how she held Joe’s hand when he awoke with night terrors, ending in many long talks. She described how she tried to boost his spirits when he broke down one day, telling him he was not defined by his disease.

Then Joe turned the table. He tearfully told Johnson – who often replied to his requests with “No, Joe, I can’t. I’m just a nurse” – that she was not just a nurse. She was his nurse, and she had changed his life because she had cared about him. 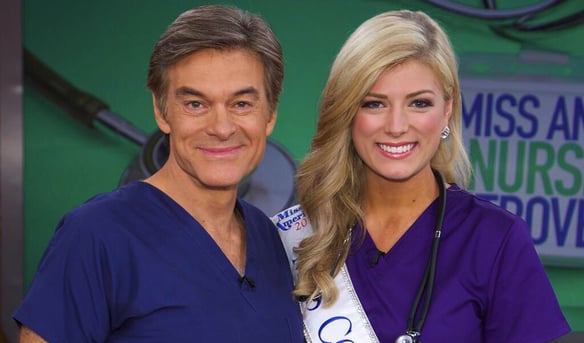 a national outpour of support included many appearances for the Colorado native, including with Dr. Oz.

Despite the unexpected fame, Johnson kept her sights on advancing her nursing skills, applying to CU Nursing’s Family Nurse Practitioner program. “I actually cried when I got my acceptance email,” Johnson said, noting that she was in a hotel and woke her parents up in the room next door to celebrate.

“CU is a top nursing school, and it’s important for me to get the best education possible,” said Johnson, who intends to continue her education and earn a doctorate, thanks, in part, to Ellen DeGeneres. “I hope one day she finds out that (her gift) did actually go to graduate school.”

“CU is a top nursing school, and it’s important for me to get the best education possible.” – Kelley Johnson

Johnson said she knew that, with living in California now and not being a bedside nurse, her CU path wasn’t going to be easy.

“I'm so thankful for everything they’ve done for me. I’m not a traditional student. They have not only been very flexible, but I’ve worked really closely with a lot of the faculty, especially Dr. (Krista) Estes, DNP, FNP, to be able to make my clinical experiences work and to be able to pass my coursework. I wouldn’t have been able to have such success without them.”

Being an advocate for the nation’s “most honorable,” but desperately needed profession, is rewarding, Johnson said.

“I tell people that we want and need more nurses in this profession. That’s my goal,” she said, recalling one memorable call from a mother after the Miss America pageant who said Johnson’s monologue convinced her daughter to forgo pageantry and become a nurse.

“That just makes it all worth it,” she said. “Nursing is really hard, and we have to celebrate those victories that remind us why we do this in the first place. That’s why for me, I can’t return to the bedside right now, because I have a job to do. And I don’t intend on stopping.”

Her advice for all of the Master of Science in Nursing and CU Nursing colleagues graduating with her during this delayed Spring Commencement: Always remember Joe’s words, Johnson said.

“Remember that you are not just anything. We are vital. We are absolutely essential to safe and effective patient care. Demand the respect that you deserve for the role that you play in healthcare. You are a nurse.”