As the only African American woman in her class, Kasey Jones knew that when she left the University of Colorado Anschutz Medical Campus, she had a job to do, one that went beyond fixing jaws and extracting teeth.

The new Doctor of Dental Surgery and U.S. Air Force officer will enter a medical field dominated by white men this summer. And she intends to use her status to effect change.

“Just realizing the disparity in healthcare has really driven me,” said Jones, a Colorado Springs native. “I want to use the privilege that I have, the education that I have, to give back to the African American community and elevate as many people as I can.”

Jones came to the CU Anschutz School of Dental Medicine via the Undergraduate Pre-health Program (UPP). Offered by the Office of Inclusion and Outreach, the program recruits students statewide from typically under-represented populations to expose them to careers and disparities in the healthcare system.

In between studies, Kasey Jones volunteered as much as possible for the dental school to "give back" and "re-energize."

“In any health profession, but in dental especially, you just don’t see a lot of African American women,” said Jones, whose mother’s health insurance as a UCHealth nurse prevented Jones from experiencing access struggles firsthand.

In the pre-health program, she learned about research atrocities, cultural differences and persistent patterns that created inequalities in the U.S. healthcare system for multiple under-represented populations, including people with disabilities. It fueled her drive.

“It really helped me get that exposure. It was definitely eye-opening.”

Although the new graduate hasn’t had time to plot out exactly how she’ll meet her broader goal – still needing to cut her own career teeth, so to speak – she has ideas.

“It starts with just helping young kids to continue to pursue an education beyond high school,” Jones said, adding that a lack of healthcare literacy in general leads to poorer healthcare and outcomes in minority populations.

“I think by putting my face out there for them, just seeing someone who looks like them and has similar cultural experiences as them, will help them realize they can elevate themselves to respected figures in society.”

Jones’ CU Anschutz education was funded through another program aimed at extending reach to the healthcare professions. The military’s Health Professions Scholarship Program (HPSP) paid for all her school costs plus a living stipend.

Now she commits to serving as a dental surgeon in the Air Force for at least four years, which she will begin at Offutt Air Force base in Nebraska in June.

Volunteering to give back, re-energize

Jones said the unity and support in the dental school, from the students and faculty to Dean Denise Kassebaum, prompted her to volunteer during her time there. “Anything to represent my school in a positive way was really important to me.”

Helping with new-student orientation and graduation were her two favorite volunteer jobs, largely because of the inspiration they gave her in getting through the rigorous program, which has made great strides in recruitment of underrepresented populations in recent years. Of the Fall 2018 class, 43% identified as students of color and more than half are female.

“The program is so challenging, it’s easy to get burned out and forget why you signed up for it in the first place,” she said. “New students are excited, and that kind of re-energized me.”

With the brutal interruption of the COVID-19 pandemic, talking about her other favorite volunteer time is bittersweet.

“Every year, I would volunteer during the graduation ceremonies,” a traditional rite stolen from her and all her fellow CU Anschutz students this year because of social-distancing requirements.

“Even though I didn’t get my own graduation this year, I spent so much time at other graduations, that I got the experience, beyond walking across the stage,” she said. 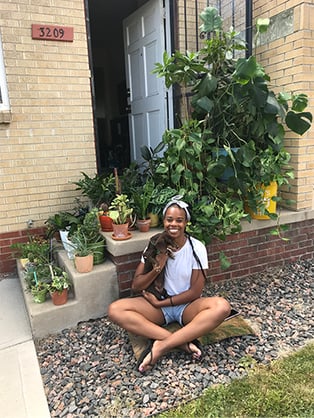 Dental graduates opted out of a virtual graduation, as some other schools and colleges held this year. “The general consensus from my classmates was: Let’s just move forward,” Jones said.

“I think everyone recognizes that this was completely out of the control of anybody and that not having a physical graduation ceremony does not diminish the accomplishment that we have achieved.”

With their licensure exams postponed, many of her classmates are left unsure as to when they can move forward, but Jones begins a residency program in the Air Force at the end of June. “The nice thing about the military is that you do not have to have a license right away.”

Despite her losses and the seriousness of the pandemic, it left her feeling grateful for many things, Jones said, including the time to reflect on her four years at CU Anschutz and to step away from the hectic pace.

“I think it’s been super important for everyone around the world, but for Americans especially, because we are workaholics. It was nice for everyone to be able to slow down and be reminded of what is important.”

Because of her scholarship and her job with the military, she feels humbled, because she’s not facing what so many other people and classmates are going through, Jones said.

Jones said her goal is to be an oral surgeon, quite possibly as a career military officer. “But,” she added, “I’m super open right now. Given how 2020 has gone thus far, I’m not making any plans that are not flexible. It’s whatever life brings, because you never know what is going to happen.”

Kasey Jones poses with her parents in the entrance of the School of Dental Medicine.