Editor’s note: This is the second in a periodic series of articles showcasing the creative talents of our faculty and students on the CU Anschutz Medical Campus. If you know of someone doing innovative work in the classroom, please send us a tip here.

As Michael Corigliano peers through goggles and shifts the paddles in his hands, a digitized human body tilts and swivels on a giant flatscreen TV. Complex structures in the body – nerves, arteries, glands, organs and muscles – appear in bright colors.

“Who came up with the colors for this? It’s like a neon body,” said Corigliano, a second-year student in the masters in Modern Human Anatomy program at the University of Colorado Anschutz Medical Campus. “This is so cool!”

Positioning students for the job market

Modern Human Anatomy faculty have steadily expanded the program’s technological platforms – 3D printing, animation and video-game simulation – and saw an opportunity to combine the courses into a study track.

“This is something students can put on their resume,” said Maureen Stabio, PhD, program vice executive director and associate professor of cell and developmental biology. “It better positions them in the job market. The use of immersive, real-time 3D technology in healthcare fields is exploding, and our students will be the future producers of these applications.”

Corigliano said he’s a “neuro-oriented person” and especially enjoyed exploring the head and neck in the virtual reality (VR) bay. “Seeing the facial nerve come through the carotid gland was really cool,” he said. “Anatomy is beautiful, and when you add different layers it becomes almost like art.”

Modern Human Anatomy fills a unique niche by blending traditional anatomical curriculum, such as cadaver dissection, with state-of-the-art digital technology. “Most U.S. programs in anatomy have expert anatomists who have no idea how to do any of these technological things,” Stabio said. “It’s unique to have faculty who speak both languages. I don’t think there’s any other anatomy program in the world that’s doing this combination, and we are building a new workforce of ‘bilingual’ graduates.”

The anatomical imaging and modeling track is an outgrowth of the Modern Human Anatomy program’s virtual human project launched by Vic Spitzer, PhD, director of the Center for Human Simulation and professor in the Department of Cell & Developmental Biology at the University of Colorado School of Medicine. Spitzer froze, sectioned and spliced a donated human body, and assembled 27,000 photos of the sectioned cadaver into a high-resolution rendering. His company, Touch of Life Technologies, offers the software that displays the digitized body in 3D form.

The new track got a boost when Unreal Engine, the company behind the popular video gaming platform Fortnite, awarded a grant that provided a phalanx of powerful computers and funding to launch a one-of-a-kind graduate course “Unreal Engine for the Anatomical Sciences”. Students use the computers to build anatomical animation in all its complexity.

“Our students will graduate with the anatomical expertise combined with the computer technological expertise to build the resources that will go into VR for healthcare education, as well as patient education and research,” Stabio said.

Ernie Salcedo, PhD, directs the new track and gets students started in MATLAB coding, a computer programming language designed for engineers and scientists. “I like to tell students I teach them programming against their will – they don’t really want to learn programming – but then they are amazed on how much they do learn and how much they can build on it from there,” he said.

Salcedo said Modern Human Anatomy students have proven their adaptability and diversity, taking on projects in different labs and disciplines across campus. In one case, student Jeannie Than worked with cardiac surgeon Jenny Zablah, MD, to use VR technology to pre-plan the fit and placement of a heart valve.

In another case, student Lisa Hirt collaborated with CU neurosurgeons on a 3D-printed brain model for patient education. The surgeons used the model to show Parkinson’s patients where deep-brain electrodes would be inserted. A subsequent study looking at both Parkinson's disease and essential tremor patients revealed that those exposed to the 3D model had increased confidence and understanding of the deep-brain procedure.

Noah Leppek, who teaches anatomy animation in the program, studied video game animation in college. He noticed his animation teachers knew the programming buttons to push, but “had no idea about anatomy – how muscles moved. If I had known something like this (track) existed when I got out of school I would have leapt at it because that’s what I wanted to know – how the body worked.”

‘Change the face of education’

Salcedo and Stabio envision that the track, as it evolves, could be offered as a hybrid credential for students in other health disciplines seeking to broaden their technology skills.

Corigliano said the track opens new doors to education and modeling for his fellow anatomy students. He plans to spend the summer using 3D modeling software to segment the cerebral arterial circle in the brain

“I think the advent of accessible modeling is really going to change the face of education,” he said. “So, if someone really wants to go into education and make it more accessible and equitable for everyone, modeling is something that’s very easy to do.”

Photo at top: Master's student Michael Corigliano inspects the head and neck of a digitized cadaver in the virtual reality bay of the Modern Human Anatomy program. 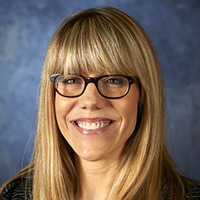 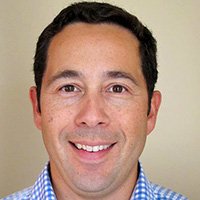