Loretta “Lee” Ford, co-founder of the CU Nursing pediatric nurse practitioner program, celebrates her 100th birthday on Dec. 28. Two of the program’s first graduates share their memories of their mentor, whose revolutionary concept grew into a profession that now boasts 290,000 nurse practitioners across the country.

Telling an audience about the “bullying” she endured while pioneering the first-ever nurse practitioner program in 1965, Loretta “Lee” Ford offered some advice: “There’s one very sure way to get people to change their behavior,” she said. “And that’s to outlive them.”

That was last winter at a meeting of the Fellows of the American Association of Nurse Practitioners (FAANP), where, in true Ford fashion, the 99-year-old innovative nurse educator generated more laughter than a veteran comedian.

“I’ve been kicked and kissed. I’ve been reviled and revered. I’ve been crucified and credited,” said Ford, who changed the course of nursing when many in the medical field were not ready for her revolutionary ideas. “But I haven’t been botoxed and detoxed,” she said to a burst of laughter and a standing ovation. 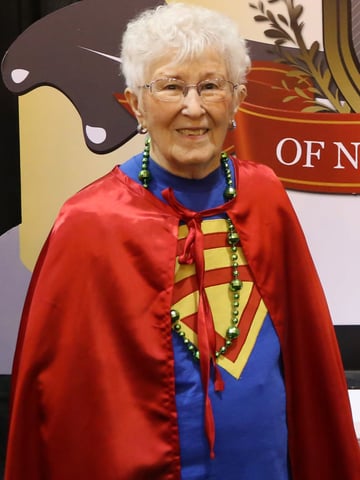 The witty and strong-willed Ford turns 100 years old on Dec. 28, outliving many of those who fought her efforts to advance nursing care at the then-School of Nursing at the University of Colorado Health Sciences Center.

The “Living Legend,” a recognition bestowed by the American Academy of Nursing and reserved for a limited few who offer “extraordinary” contributions to the field, is the oldest living “Living Legend” today.

“She was just a very progressive thinker,” said Madeline “Maddie” Nichols (PNP ’67), one of the first graduates of the Pediatric Nurse Practitioner program co-founded by Ford and pediatrician Henry Silver, MD. “I think she instilled in us the fact that we could do these things that we were being asked to do – that we really needed to rethink who we were as nurses.”

From those first few graduates – some of whom (including Nichols and Ford) still get together at least annually (pre-COVID) – nurse practitioners now number more than 290,000 in the country and comprise one of the fastest-growing medical specialties. They play a major role in healthcare, covering nearly every discipline and commanding a median base salary of $110,000 in 2019, according to the AANP.

“All of the other specialties expanded with this as a model,” said Ann Smith (BS ’64, MS ’65), also one of the program’s first graduates. “It just opened pathways and avenues for nursing practice.”

Ford, who joined the U.S. Army Air Force as a nurse in 1942 following her fiancée’s death in World War II, came to Denver and the CU nursing school, now the College of Nursing, on the G.I. Bill. She earned a Bachelor of Science degree in nursing with a Public Health Nursing certificate in 1949 and a Master of Public Health Nursing Supervision in 1951.

After joining the CU School of Nursing as an assistant professor, Ford received her Doctorate in Education in 1961. While training nurses in the field, Ford noticed disparities in healthcare, particularly in the rural and mountain areas of Colorado. Nurses were trying to fill the gaps, including Nichols, who was working as a public health nurse at a well-baby clinic in northwest Denver at the time.

But most of the clinics were temporary, and the nurses didn’t have the skills they needed. “You saw conditions, and you just didn’t know how to handle them, or you didn’t have the authority to handle them,” said Smith, who returned to CU after experiencing the same issues while working as a public health nurse in rural New Jersey.

“That was the perspective I came with, and Lee and I just saw eye to eye,” Smith said of Ford, who became both Nichols’ and Smith’s longtime mentor.

So, Ford began developing more specialized curriculum, eventually teaming up with Silver to form the country’s first nurse practitioner program. But not everyone accepted her ideas with open arms.

“The main thing about her was that she had an interdisciplinary outlook,” Smith said of Ford. “In nursing in those days, the school was a little bit sheltered. But Lee was never sheltered. She was always outgoing,” Smith said.

“We had classes in strange places, wherever space was available, because the nursing school was not really supportive of Lee in this endeavor,” Nichols said. “At the time, this was kind of a foreign concept. It wasn’t what nurses were supposed to do, and so Lee really struggled with this.”

Nichols recalled how the medical students would tease the new nurse-practitioner students, calling them wannabe “super nurses” and making it apparent they didn’t like them taking time away from their medical instructors. “It was a strange time,” she said.

“There was a lot of strife,” Smith said. “But she managed all of that; she absorbed it all,” Smith said of Ford. “She just had a good outlook. She was our leader, and she set the pace.”

Nichols recalled round-table-like sessions that were held weekly with Ford, Silver, students and the brand-new nurse practitioners making history in Colorado. “We were really a tight-knit group,” Nichols said. “It was just amazing how Lee and Henry pulled this off,” Nichols said. “I would not have thought back then when sitting around our little round table that this would become so big.”

Concept was a ‘game changer’ for nursing

But the idea did flourish, eventually embraced by CU, the country and the world. “We started a health station under the auspices of the university out at the old Stapleton Health Project,” Smith said. “So I practiced there, and that was wonderful. All of these renowned pediatricians and physicians would come out to visit us.”

When Smith went back to CU Nursing to teach, she soon found herself facing an intimidating student.

“I think it was about four or five years later that Lee decided that she should experience the role of pediatric nurse practitioner,” Smith said. “All of the sudden, Lee, who had been my longtime mentor and undergraduate and graduate teacher became my student. It was very strange,” Smith said. “I just sort of stood there, and she said: ‘Well, get on with it.’”

Read more birthday wishes and tributes to Ford on a special

dedication page created by the CU College of Nursing.

Ford eventually moved back to her native New York and became the founding dean of the nursing school at the University of Rochester in 1972. Her nurse-practitioner model continued to grow, with programs now offered in about 400 academic institutions across the country.

Now retired in Florida (and home-bound during the pandemic), Ford still offers words of inspiration virtually to nurses across the country, including during some recent CU Nursing classes.

“Her concept of what nursing could contribute to patient care was totally different than what I would have envisioned for myself,” Nichols said. “What she did for I think all of us in terms of our self-esteem and believing in what we could do was phenomenal. Happy Birthday, Lee,” Nichols said. “You are a game changer.”