Aphasia is a language disorder that can impact an individual’s speaking, writing and comprehension. Despite being difficult to diagnose at times, treatment and recovery options for aphasia are available.

The family of actor Bruce Willis recently announced that he would be stepping away from acting following an aphasia diagnosis – a language disorder caused by damage to the areas of the brain responsible for expression and comprehension.

CU Anschutz Today sat down with Peter Pressman, MD, associate professor in cognitive and behavioral neurology at the University of Colorado School of Medicine, to discuss how aphasia is often hidden behind other diagnoses, why treating and supporting the individual matters with aphasia, and the outlook on recovery.

An aphasia is an acquired loss of language skills. This is distinct from just an inability to speak, for example, which may come from paralysis of the lips or tongue, but really goes beyond that. It would be both speaking and writing, or understanding, or listening and reading.

What can cause aphasia?

The most common cause of an aphasia is a stroke, but other things can also do it including traumatic brain injury, neurodegenerative diseases, tumors or some infections.

By neurodegenerative, this includes Alzheimer's disease?

Alzheimer's and frontotemporal dementia. I specialize in an uncommon disorder called primary progressive aphasia in which a neurodegenerative illness, usually Alzheimer's or a frontotemporal dementia, selectively attacks part of the brain that is responsible for language. So instead of the slow erosion of memory that people more commonly associate with Alzheimer's disease, you see a slow progressive loss of language functions.

Can you explain a little bit more – what are the different subset types of aphasia that you see in patients?

The truth though is that there are lots of different variations of aphasia.

Do you see aphasia specifically in older populations or is it dependent on the individual cause?

Because stroke is the most common cause of an aphasia and stroke is more common in older people, there tends to be more aphasia as you get older. This is also true because of other disorders of brain aging, like Alzheimer's, for example. So there does tend to be some association with age, but it's really because of the association with the diseases that could cause the aphasia.

What are the specific symptoms of aphasia, noting that there are several types?

All of us lose words or names sometimes. That's just natural. In an aphasia, this can become much more pronounced and striking. Some people just can't come up with the word. Other people will find that they know what they want to say, but they can't form that with their mouth or tongue. Others are less aware of their aphasia but fail to understand what is being said to them.

And this isn't just a lack of ability to track the conversation like, “Oh, I just wasn't paying attention.” It can truly be, “I am not recognizing this word that I previously would've known very well.”

So maybe that's a familiar name, or it may be something as simple as, Heaven forbid, coffee. And you just say, “I need the thing.” I think it's important to know that when it occurs, it will also occur in other modalities like writing and reading for it to truly be an aphasia.

Do you also see aphasia in patients who use sign language?

Yes. If you had an aphasia with sign language, you would have effectively the same problems, but it would come out in sign instead of speech.

How is aphasia primarily diagnosed?

It can be challenging. Sometimes it's obvious. And to tell you the truth, in the setting of common situations like stroke, it can be very obvious and dramatic at that time. Someone is clearly just really struggling to speak. That can be quite alarming. And that's an immediate reason to go to the hospital as soon as possible.

In primary progressive aphasia, which I focus on, the onset of the aphasia is more insidious. It creeps up on patients and can often take years to arrive at the diagnosis. People don't know how to describe it. Not necessarily just because they're in aphasia, but because our shared language is just bad describing slow loss of language.

Most people who come into the clinic for what is called a “memory problem.” And it takes some doing to figure out that it's just problems remembering words or what things mean. Honing in on that often takes awareness, attention and some expertise on the behalf of the medical provider.

What are the treatment options for aphasia?

Well, of course you want to treat the underlying cause – whatever that might be. If it's a stroke, you want to stop this person from having more strokes. That's where you'd begin.

The mainstay of recovery is speech therapy for just about any type of aphasia. The way that speech therapy is tailored, constructed and delivered depends on the nature of the aphasia. It would make no sense, for example, to treat a receptive aphasia the same way that you would an expressive aphasia. They're very different. And that's, again, painting with a broad brush. Specialists will get even deeper into the nature of the aphasia and hone their therapy appropriately.

There are added things like communication strategies for loved ones to talk to the person with aphasia. There are lots of different ways of communicating successfully. And so usually you can find a strategy that is more effective. There are resources for coping, whether a support group, paying attention to mood, making sure that quality of life remains as high as possible and that the person is as safe as possible.

I think it's important to note that while an aphasia can be a very frustrating disorder, there's a lot that people can still do. Often, aphasia spares other cognitive functions. So some people with an aphasia can drive just fine. They can still go out to activities that they enjoy, so long as they find a way to effectively communicate the things they have to do.

How common is aphasia?

What’s the recovery outlook for aphasia?

It also depends on the cause. If it's an incurable disease; we're probably not going to fix it. But we can try to make it better, make living with it easier, and improve quality of life.

But in the setting of stroke, especially a mild stroke, aphasia often improves. Same for traumatic brain injuries, if the injury isn't devastating.

And so we recommend therapies. My colleagues at Craig Hospital have emphasized the benefits of longer therapy times when it comes to traumatic brain injuries.  I think that likely extends to other causes of aphasia as well.

We used to say after your initial injury, you have about a year or so. And after that, you're kind of plateaued, but that's not really true. You can keep on working on therapy and continue seeing benefits from that.

I guess my message to anybody with aphasia would be one of encouragement: to keep going. And beyond just seeking therapies, know that there's a lot that you can still do, that you can find joy in and go out and do those things.

There's a world out there. There's a life to be had. 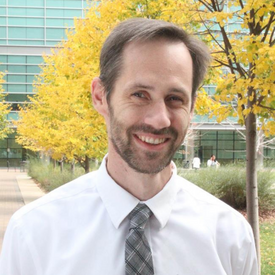