The newest dean on campus has a lot to boast about. A recent invitation to the Vatican. An award presented by a king. But after 40 years in a career that landed him many top-level posts and prominent international recognition, the dean of the Colorado School of Public Health (ColoradoSPH) remains straight-forward and modest.

Unless the conversation turns to grandchildren, of course.

Dean Jonathan Samet, MD, MS, who took over his new desk on the University of Colorado Anschutz Medical Campus before making his pontifical stop, came from the Keck School of Medicine at the University of Southern California, where he was chair of the Department of Preventive Medicine.

Considered a top global expert on air pollution and tobacco control, Samet’s accolades include a National Academy of Medicine election, a National Cancer Advisory Board appointment, two Surgeon General’s Medallions and the Prince Mahidol Award for Global Health presented by the King of Thailand.

Samet recently sat down with CU Anschutz Today to discuss his career highlights and outlook for the ColoradoSPH. 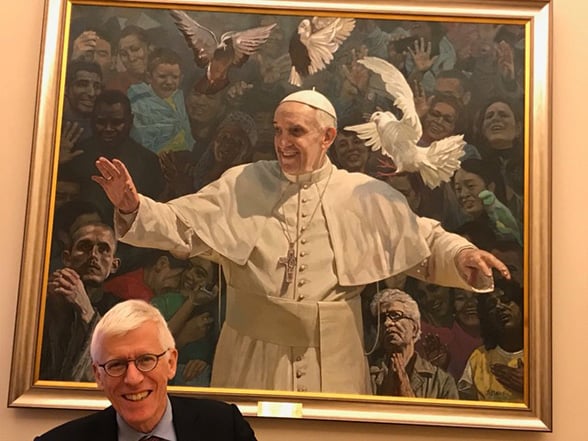 Today: How did you earn an invitation to such an exclusive Vatican event?

Samet: For decades, I have focused on air pollution and air quality, and I’ve been involved in many related issues. I chaired the Environmental Protection Agency’s Clean Air Scientific Advisory Committee, and I’ve been involved with the World Health Organization and the Surgeon General’s office and written extensively on this issue.

Today: At the Vatican, you spoke on the disease burden of air pollution. Tell us about your message.

Samet: Outdoor air pollution causes 5 million premature deaths a year. Then there are a billion and a half people or so who are exposed to smoke indoors from biomass fuels (wood, dung, charcoal) that they use for heating and cooking. This occurs mainly in other countries and is a rising problem. Nationally, things have improved. For instance, 30 years ago, Denver was famous for its dense brown cloud. Thankfully, it’s not what it used to be. But in the rest of the world  ̶  India, China, parts of Asia, parts of Africa  ̶  air pollution levels are back up to what killed people in the past. It remains a serious global health problem.

Today: What were the driving factors behind your decision to take this position?

Samet: The real professional attraction was to take the leadership of a school that I think has tremendous opportunity to have impact on public health here in Colorado and the region. I’ve always been interested in taking research and doing something with it: If there is one thing that has defined my career, it’s probably that. I want to make sure we’re taking what we learn and moving it into action. On the personal side, my son and grandchildren are here. My son came to the University of Colorado in Boulder years ago for the reason any young man would go there: to rock climb. And he stayed.

Today: What are your chief goals for the school and community?

Samet: The school is special in that it crosses three universities: the University of Colorado Anschutz Medical Campus, Colorado State University and the University of Northern Colorado. We have good programs at each and complementary strengths across the three campuses. That’s something to build on. Just as an example, by drawing on CSU’s long-standing strengths at the veterinary school, we can look at the issue of antibiotic resistance. A lot of the drive behind increasing resistance is the use of antibiotics in animals.

And Colorado has a number of issues that need to be studied or addressed. Right now, there is a unique experiment going on with the legalization of marijuana. We’re in the forefront there, and we need to understand any potential consequences. There’s also rapid growth in the state and what comes with that, such as housing issues, environmental changes. These are all things in which I think the school should be involved.

Today: You’ve written a bit about the public’s losing trust in science and medical experts. Can you tell us how that works against you and your colleagues?

Samet: For those of us in public health, our research may have important consequences. As an example, showing that smoking causes lung cancer demands action. These kinds of findings may bump up against powerful interests. We know as the science unfolded on smoking and disease, the tobacco industry was always there trying to undermine the findings and their public health impact, creating doubt about the evidence. This has spread, for instance, with climate change and with vaccinations. People are, in a sense, making belief equivalent to evidence as a foundation for decision-making. For instance, a parent says: I believe childhood vaccinations cause autism, which is well discredited. Therefore, I will not vaccinate my child. At some point, this becomes a problem.

Today: How would you describe progress in your other main focus area: tobacco control?

Samet: If you look nationally at the rates of cigarette smoking at the peak in 1960 or so, the majority of men were smokers. If you look now, we are down to about 17 percent of adults smoking daily. There’s tremendous progress but with new challenges. The world of tobacco control has changed really quickly with the arrival of various products that are not combustible cigarettes. We are at another turning point.

Today: You recently accepted a top award in your field from the American Public Health Association’s Epidemiology Section. You are no stranger to awards. Was there anything particularly special about this one?

Samet: This was the Wade Hampton Frost (1880–1938) award. He was essentially the first academic epidemiologist. He founded the Department of Epidemiology at Johns Hopkins Bloomberg School of Public Health. I was in the line of chairs who came after him, so that was an honor for me, and I enjoyed the opportunity to talk with colleagues.

Today: What is one misperception people have about you?

Samet: Probably a workaholic perception. I do work hard,  but I have many interests outside of work. For instance, I’m passionate about jazz (and his 3- and 6-year-old grandsons). The one who just turned 6 has been riding his bike to the bike park without training wheels since he was 3. So I definitely will be cycling with them. And they are, of course, rock-climbers already. So I’m really looking forward to the outdoor activities and spending time with family.