Home News Upping Her Game: Pharmacy Instructor Gets Creative in the Classroom back to News

Editor's Note: This is the first in a periodic series of articles showcasing the creative talents of our faculty and students on the CU Anschutz Medical Campus. If you know of someone doing innovative work in the classroom, please send us a tip here.

Slaying creepy bugs with an arsenal of foreign firearms or being thrown into an escape room where the entire Front Range population dies if they fail are just average tasks for Meghan Jeffres’ students.

Jeffres, PharmD, an associate professor in the Skaggs School of Pharmacy and Pharmaceutical Sciences, has employed games in the classroom, from Cardio Go Fish to Infectious Disease Gin Rummy, since an early teaching job in Las Vegas.

There, in the world of high-stakes poker games and flashy slot machines, classes at her previous university ran on a block schedule, putting instructors in front of one group of students from 8 a.m. to 3 p.m. every day.

“You can’t lecture for seven hours. You’ll absolutely lose your mind, and the students will hate you. You have to find new ways to teach,” said Jeffres, an award-winning instructor for excellence and innovation in education and this year’s winner of the President’s Excellence in Teaching award. “So that’s where I started leaning into understanding the science of education.”

Since then, Jeffres has upped her game, creating a mobile-app called Infectopede, an online cache of games titled BugOut, and numerous escape-room challenges for her students on the University of Colorado Anschutz Medical Campus.

Invasion of the pathogens

“You just want to push the boundaries and keep it engaging. I want all eyes on me 100% of classroom time,” said Jeffres, whose quick wit likely adds to her popularity. “OK, that’s a bit narcissistic I suppose,” she added with a grin.

Jeffres’ Infectopede (similar to Centipede for those old enough to remember arcade games) pits students against invading bugs that can blow them up if they don’t kill the onslaught of pathogens first. The trick: choosing the right weapon in their arsenal (a spectrum of antibiotics) to shoot down the cascading germs (MRSA, C. diff, Legionella, etc.) with their movable gun (syringe).

A video clip of Meghan Jeffres' Infectopede game in action.

“She understands the value of alternative approaches for learning,” Hassan said. “Infectious disease was a subject that I struggled with – heavy emphasis on struggled – and was very much intimidated by,” she said.

Infectopede became a favorite way to study, Hassan said. “I actually still pull it out occasionally to refresh my knowledge.” By the end of the semester, Hassan had secured a spot on the leaderboard and, more importantly, the fundamental knowledge of antibiotic therapy, she said.

Not a video-gamer herself, Jeffres grew up on a ranch near Lander, Wyo. “I never had a Nintendo,” she said, adding that ranch work doesn’t afford a lot of time for video-game breaks.

Jeffres’ first “paid” job was at the hometown pharmacy owned by her best friend’s dad, where she did various odd jobs from cleaning the storage room to wrapping presents. “It was like a classic Rockwellian independent pharmacy. It sold perfume and roasted nuts,” she said. “Everyone went there for Christmas gifts.”

That friend’s dad provided the morale boost for her to go to pharmacy school, where Jeffres was influenced by a professor she described as “an absolute legend in terms of his ability to teach really complicated stuff.” He ignited her love of pharmacology, she said.

“It was sort of like witchcraft but with science,” Jeffres said. “You put this drug in this receptor, and the heart rate changes, and you can just see the sequential logic of the whole thing.”

Instilling passion in others

Now, Jeffres works to share that passion. “I want them to fall in love with the content,” she said of her students. “To do that, you’ve really got to set down a solid foundation. So, almost all of my games are rudimentary, foundational knowledge,” she said, describing it as the road to “higher-level thinking.”

Gaming works well in the health sciences, which requires a large amount of rote learning with the level of data increasing exponentially each year, Jeffres said. “You need to find a way to engage students in a way that the content will stick.”

Rather than the all-too-often “binging and purging” of information as students go through the years, Jeffres seeks to teach her students how their educational journey becomes easier once that retention of the basics occurs. “So they are actually building upon what they’ve learned before,” she said.

As the recipient of the 2021 President's Excellence in Teaching award, Meghan Jeffres was an invited speaker at this year's graduation ceremony.

“Gamification helps when the content is interpreted as not exciting – these rudimentary skills that are largely not taught; they are told,” Jeffres said.

For example, Jeffres said, foundational skills she teaches in a clinical problem-solving class include learning to efficiently use references such as Micromedex and PubMed. “It’s easy to say: Here’s the website. Go spend some time in there,” Jeffres said. “But students are unlikely to do it without providing a carrot.”

Getting lost in learning and fun

Instead, Jeffres will create classroom projects in a game format, such as an escape room-like challenge, that requires the use of medical references to solve puzzles to complete the task. “So, they spend time in all of these reference sites without sort of knowing that they are learning about them, or at least being way more willing to engage in that learning.”

“It was sort of like witchcraft but with science. You put this drug in this receptor, and the heart rate changes, and you can just see the sequential logic of the whole thing.” – Meghan Jeffres, PharmD, on falling in love with pharmacology

Jeffres tries to think of new puzzle concepts every year. “I give them a scenario like, ‘Someone broke into the CDC lab, and they stole anthrax, and they are going to spray it across the Front Range. Now you have to unlock the safety room where all of the anthrax antibiotics are underneath the Denver airport. You must solve all puzzles to unlock the door.”

While her approach is fun, Jeffres is not all games, Hassan said.

“She is the kind of professor that you can have an intensely cerebral conversation with and then have a great laugh with the very next moment. I was fortunate to have her as a teacher in the classroom and as a preceptor on rotation,” she said. “To this day, I think about how she pushed me outside of my comfort zone to reach the potential I couldn’t see for myself. For that, I will forever be grateful.” 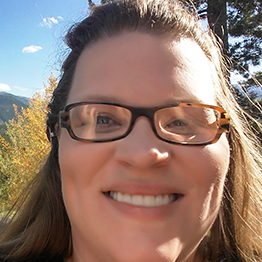