Siri Lindley couldn’t swim. She had never learned how and the idea of competing in a triathlon seemed completely out of the question.

“I couldn’t help but fall in love with the sport,” says Siri. “Something about it drew me in and I knew I had to start training.”

For eight years, Siri dedicated her life to training for the sport she loved. In 1992, at the age of 23, she completed her first triathlon event. Just four years later, in 1996, Siri competed in the International Triathlon Union (ITU) World Cup Races. But competing was not enough. Siri had a goal -- she wanted to be number one in the world.

Her dedication and passion for the sport reached the pinnacle in 2001 when Siri won the title of ITU World Champion after winning six consecutive ITU World Cup Races. She retired from the sport on top and turned to coaching athletes competing in the Olympics and Ironman World Championships.

“The thought of competing in a triathlon was an impossible dream at one point in my life,” says Siri. “I was able to make the impossible possible.”

Saved by the hip

After years of training and competing, it was normal for Siri to have some aches and pains occasionally. However, her hip had become so troublesome that she was no longer able to do her signature “silly dance” that she performed before every speech. 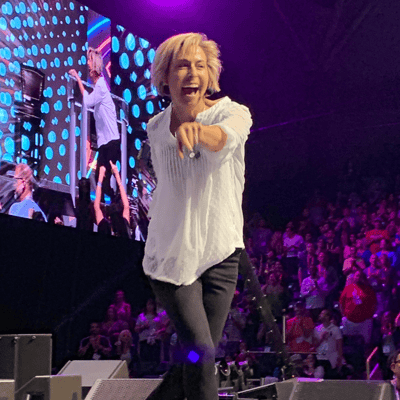 “As fate would have it, I ended up as a speaker in multiple Tony Robbins events,” explains Siri. “It started out as an interview in Hawaii after an event, which turned into participating in one of his podcasts, which eventually would lead Tony Robbins asking me to speak at a leadership meeting. I had never done any public speaking before. Luckily, it came naturally and is now what I live for. But my sore hip was definitely taking away from my dance moves.”

Siri needed hip surgery. During her pre-operation appointment she had the standard tests, including a blood sample. Little did she know that these blood samples would ultimately save her life.

“The doctors called me and said that they were very concerned about the results of my blood samples,” says Siri. “They mentioned the word leukemia, and I thought ‘there is no way.’ Looking back now, I am so thankful for my hip issues. I probably would not have caught it or caught it way too late had it not been for my sore hip.”

Many tests later, Siri’s world was turned upside down by the diagnosis of acute myeloid leukemia (AML). AML is a cancer that starts in the bone marrow but quickly moves into the blood as well.

“When I got diagnosed my immediate thought was ‘this is not my time to go...I am going to survive this...I am going to thrive through this,’” says Siri. “Rather than focusing on the present situation I focused on the final outcome.”

Siri knew that she had to come up with the best treatment plan and work with the best doctors to get through her diagnosis. After receiving many recommendations, she ended at the University of Colorado Cancer Center under the care of doctors Daniel Pollyea, MD, and Jonathan Gutman, MD.

“In most AML cases in patients under 60, it is traditionally diagnosed after a person goes from being very healthy to being incredibly sick in a matter of weeks. Without treatment, it is a rapidly lethal disease,” explains Gutman.

In most cases, it is not caught in a screening like Siri’s case. But Gutman strongly believes that in weeks to months she would have started to show these AML symptoms.

“Historically speaking, and at virtually any other cancer center in the country right now, if a 51-year-old extremely healthy person walked in the door with Siri’s specific type of AML they would get induction chemotherapy, then probably a stem cell transplant,” says Gutman.

Induction therapy, or seven plus three chemotherapy, will wipe out a patient’s blood counts to nothing, and then he/she will spend a month in the hospital, letting the blood cell count recover and hopefully be in remission.

“It is a very challenging thing to go through, people often become very sick, and it doesn't always work,” says Gutman.

That is where Pollyea’s clinical trial comes into Siri’s AML treatment.

“While there is no one healthier than Siri Lindley in the universe, that shouldn’t automatically mean she should get induction chemotherapy. Just because she’s likely to survive it shouldn’t mean she should get it. In Siri’s case, her disease features suggested she would have only around a 40% chance of responding to this treatment,” says Pollyea. “We need to do better for these patients.”

Instead, he offered Siri a clinical trial, in the hopes that it would be a better treatment option. This trial involved a drug called venetoclax, which Pollyea’s team has been working on since 2015 and was FDA approved in 2018 for elderly patients who are deemed unfit for intensive chemotherapy.

“This has been a revolutionary treatment for AML. In the process of treating now upwards of 200 patients with venetoclax-based regimens, we noticed that the typical risk features for a poor response to chemotherapy aren’t relevant in people who get venetoclax.” Pollyea further explained the idea behind the clinical trial, and expanding this option to younger, healthier people like Siri. “Knowing that venetoclax carries up to a 70% response rate, and does well in patients who have bad risk factors for traditional chemotherapy, we developed a clinical trial to use it in younger, fitter patients, who might survive chemotherapy but are unlikely to respond because of their underlying disease features.”

Siri did in fact respond to the new clinical trial treatment option and had minimal side effects, and did not have to be in a hospital for a month with intensive chemotherapy.

“Siri is the poster child for somebody fit for the old-fashioned chemotherapy, but the important thing with Siri is that even though she's fit for it, it wasn’t the right thing to do. We understand this disease better now, and we can do better. With more patients like Siri volunteering to participate in this trial we hope to be able to prove to the world that this should be the preferred strategy in these situations,” Pollyea says.

This is one example of how the hematology division at the CU School of Medicine are leaders in a shift in the approach to the treatment of this disease, and show that these treatments can be less toxic, equally effective, much more manageable.

Starting her second clinical trial for a bone marrow transplant

“As soon as I went into remission, I immediately went in for my stem cell transplant,” says Siri. “It was the hardest experience I had ever gone through, but I was determined to come out stronger than before.”

Her stem cell transplant was part of another clinical trial taking place at the CU Cancer Center which she hopes will cure her.

Gutman is the PI on this clinical study, and it used half matched donor cells in combination with umbilical cord blood. The trial is designed to result in more rapid recovery of blood cell counts after transplant than is seen after a traditional cord blood transplant. This hopefully gets patients through the acute transplant process more easily and shortens time in the hospital.

“My doctors are my absolute heroes. I have no doubt they saved my life.”

“My doctors are my absolute heroes,” says Siri. “I have no doubt they saved my life.”

Siri used vision boards in her hospital that motivated her through her hospital experience. Pictures of her running her favorite trail, enjoying life with her wife Rebekah, and her beloved horses kept her going.

Once again, Siri has defied the odds and done the impossible. She is more than one year out from her transplant and cancer free.

Although it can be difficult to find good from a cancer diagnosis, Siri knows that the experience came with a lot of positive outcomes.

“The diagnosis brought my family back together. We had grown apart, but they all gathered around me in such an incredible way,” explains Siri. “My mom, my wife, and the doctors were all superheroes.” 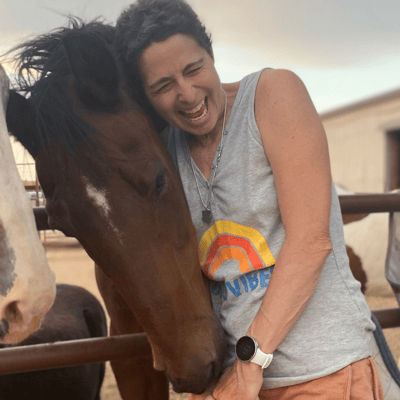 Siri’s mom slept at the hospital every day for a month.

“I also got to spend more time with my horses, which is so therapeutic and healing.”

Siri and her wife run a horse rescue in Longmont called Believe Ranch and Rescue.

“In the last three years we have saved 117 beautiful horses,” says Siri. “It has been the most beautiful experience saving these horses and giving them a loving life. For me, the horses gave me a sense of safety and calm while I was going through treatments.”

Today, Siri is back to doing what she loves most -- public speaking and coaching a world class group of triathletes. She has already done multiple online events with three more planned later this year. She also has a new appreciation for life that probably would not have happened without a cancer diagnosis.

“I get to live!” says Siri. “It is a miracle. I will make the most out of this life, I will love, I will share, every single moment of life is a gift. I am just so grateful.”