Home News Beating a Deadly Sarcoma  back to News

Ward McNeilly thought he was a goner.

It was summer 2021, and the sarcoma that had started in the Denver resident’s left thigh seemed to be under control, subdued by radiation and chemotherapy following a surgery in 2018 to remove the initial tumor and another surgery in 2019 to remove cancerous tumors in his groin. McNeilly was doing so well, in fact, that his doctors at UCHealth University of Colorado Hospital authorized a “chemo vacation” to give his body a break from some of the side effects of the treatment.

That’s when things got worse.

“When you do a chemo vacation, the physicians monitor it with periodic CT scans to see your progress,” says McNeilly, 71. “If the tumors grow again, then typically you go back on chemo; if they shrink, then they're trending in the right direction and you could maybe continue with the chemo vacation.

“In my case, I had a three-month follow-up CT scan, and the cancer had metastasized to my upper body, my lungs, a number of places in my bone, and my stomach lining, and I had a couple of tumors on my scalp,” he continues. “Then they identified a brain tumor also, and I thought, ‘Oh man, I'm dying. This is it. I’m gone.’”

Approved for a clinical trial

After the cancer had metastasized, McNeilly’s care team expanded to include CU Cancer Center member Breelyn Wilky, MD, who knew she had to act fast.

“He had developed disease all over his body, very symptomatic, miserable, and all of a sudden his quality of life was horrible and we were worried he was going to die,” says Wilky, associate professor of medical oncology at the University of Colorado School of Medicine. “It was this horrible situation where our hands were tied, and he was getting worse by day. We wanted to get him on a clinical trial but we kept running into logistical hurdles. But finally we got him started on treatment.” 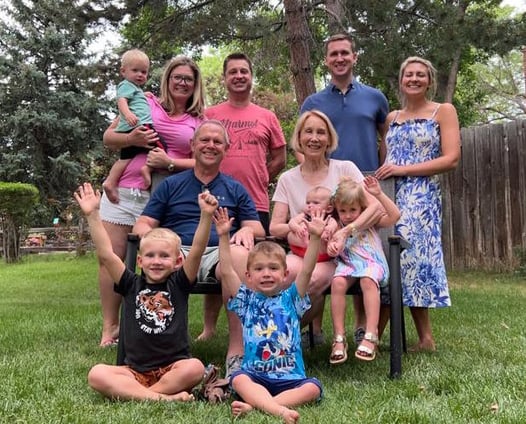 "I have an extra life here that I didn't think I'd have back back in the fall of 2021," says McNeilly, pictured with his family. "It changes your perspective."

Within days of McNeilly’s first treatment on Wilky’s clinical trial, his tumors began to shrink.

“I thought I was dead,” he says, “and then it was like, this miracle.”

It all started with a lump

McNeilly’s cancer journey started in January 2018, at his annual physical. McNeilly mentioned a lump he had noticed on his left thigh, and his primary care doctor sent him for an ultrasound with a vascular specialist. Concerned the lump could be a sarcoma, the specialist referred McNeilly for an MRI, where the diagnosis was confirmed.

“That immediately sent us like scampering: ‘Oh my God, what is this, and where can I get treatment?’” McNeilly remembers. “We did whirlwind research, and my wife really got into it and identified places we could go.”

They found the perfect fit at the CU Cancer Center — not only would it allow them to stay local to Denver, but McNeilly was reassured by the center’s multidisciplinary clinic model, where multiple specialists meet to review a patient’s case and devise a joint recommendation for care and treatment. The McNeillys felt fortunate they had the resources — along with other grateful patients — to establish the Cheryl Bennett and McNeilly Family Endowed Chair for Wilky.

Endowed chairs are vital to the future of academic medicine and are the highest academic award the University can bestow on a faculty member. Endowed chairs are established with a minimum gift of $2 million; additional gifts to a specific endowment would enable the chairholder to increase the amount of research, for example by hiring a PhD to assist them, or purchasing new equipment or technology.

“Sarcoma, unfortunately, is a fairly rare type of cancer, and they haven't had a lot of the research that some of the other major cancers have had,” McNeilly says. “But there's a small group of researchers throughout the world, including Dr. Wilky, who worked together closely to leverage their capabilities. She knows what's going on throughout the world, and she’s a great networker. It's fantastic, what they what they've been able to do.”

Sarcomas are rare cancers that account for only about 1% of all adult cancers and about 15% of cancers in children. They can form in various locations in the body, including the bones and the soft tissue (also called connective tissue) that connects, supports, and surrounds other body structures. This includes muscle, fat, blood vessels, nerves, tendons, and the lining of the joints. Most sarcomas occur in the arms, legs, or trunk of the body but can occur anywhere from head to toe. There are more than 150 different types of bone and soft tissue sarcomas.

“Most people with sarcoma will have a growing soft tissue mass, most commonly on an arm or leg or the flank,” Wilky says. “If you have a mass that's bigger than a golf ball or is starting to grow or is causing you pain, you really need to get that looked at. There are simple tests like an ultrasound or an MRI that can tell the difference between the more common things, like a cyst or a hematoma, and a tumor. That early recognition is so important because if you catch it early, you can just remove it. But if they get bigger than that, that's where you start to run the risk of having it spread and become more complicated.” 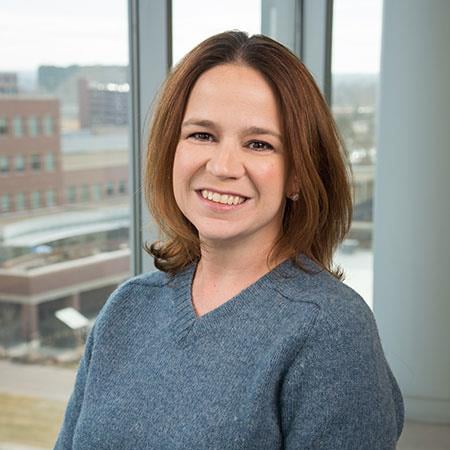