Cancer survivor – stage 4 laryngeal cancer that necessitated a tracheostomy and laryngectomy, that forced her to relearn how to breathe and talk.

“I have been truly blessed,” she says, and not just because her scans now show no evidence of disease, or because her risk of cancer recurrence is low, or even because she has earned moments and days that she thought wouldn’t be hers when she received a cancer diagnosis in early 2021. She counts herself blessed that she was the last participant enrolled in a phase 1/1b trial whose results show tremendous potential to improve the standard of care for patients diagnosed with a subset of head and neck cancers.

The recently published study, led by University of Colorado Cancer Center member Sana Karam, MD, PhD, vice chair of translational research in the CU School of Medicine, demonstrates that one cycle of the immunotherapy drug Durvalumab, used in a specific timeframe before surgery and in concert with radiation therapy, can stimulate a patient’s immune system to kill all or most of the cancer before surgery.

“We looked at the existing standard of care and said, ‘OK, patients are still not doing very well,’” Karam says. “We starting looking at the time when patients are prepping for surgery as a window of opportunity to do something, to change the course of the disease. We gave this combination of one cycle of Durvalumab and three sessions of radiation in high doses pre-operatively, and the response rate was out of this world.”

“The last thing I expected to hear”

Before a treatment response that exceeded all expectations, though, Jane Hart was a bit hoarse.

She’d recently moved from Kansas to Denver to be closer to Shelby, she was enjoying building her life in Colorado, and initially thought nothing of the hoarseness. She’d always been healthy.

“I used to smoke,” she says, “so I was thinking maybe it had something to do with that?”

In early 2021, it was enough of an issue that she met with an otolaryngologist, who let her know that one of her vocal cords had no blood flowing through it. Humans only have two that produce sound, so this was a huge concern. A scope and a biopsy followed, and then a stark diagnosis: stage 4 laryngeal cancer. Jane passed out in the doctor’s office after hearing it.

“My husband had lung cancer, but I had no family history,” she says. “That was the last thing I expected to hear. The only think I could do was lay it on the Lord.”

She began working with a multidisciplinary care team that included Jessica McDermott, MD, deputy assistant director for diversity and inclusion in clinical research in the CU Cancer Center, and Julie Goddard, MD, an assistant professor of otolaryngology in the CU School of Medicine.

After meeting with Goddard to discuss the tracheostomy she would receive, Jane learned about the clinical trial Karam was leading, studying HPV-unrelated head and neck squamous cell carcinomas (HNSCC). Jane’s diagnosis was an HNSCC, and she qualified for the trial.

Improving the standard of care

“One of my main goals is to improve the standard of care for our patients,” Karam says. “Imagine if our head and neck cancer patients didn’t have to go through some of what they currently do, the treatments that can have such a huge impact on their quality of life.”

For Jane, the tracheostomy and laryngectomy had such an impact. She remembers seeing the Centers for Disease Control (CDC) “Tips from Former Smokers” campaign commercials on TV, featuring people discussing the realities of daily life after having those procedures.

“I would never have thought that would be me,” Jane says.

She received a tracheostomy, or surgical opening created through the neck into the trachea, in March 2021, near the time that she learned she was the last qualifier for the HNSCC trial – which she compares with winning the golden ticket. She received one cycle of Durvalumab and three sessions of radiation in high doses.

“I would have had to have chemotherapy if I hadn’t received the immunotherapy,” she says. “My husband had to do chemo with his lung cancer, so I saw what the side effects could be from that. Because of the immunotherapy, I didn’t have them.”

In May 2021, she had a laryngectomy, or surgery to remove part or all of the larynx (commonly called the voice box), with Goddard. The procedure is considered standard of care, “and they did it out of precaution,” Jane explains. “But during the surgery they saw no tumor, I’d had a complete response. I know Dr. Karam hopes that in the future, everybody will be able to keep their voice box.”

Living a new version of life

Jane was in the hospital for a month following her laryngectomy, working with speech therapists and respiratory therapists to relearn how to breathe, speak, and otherwise live a new version of her life.

“Everybody was amazing for her,” says Shelby, a physical therapist. “She loved Liz, her speech therapist, and Tom, her respiratory therapist who walked with her every day.” 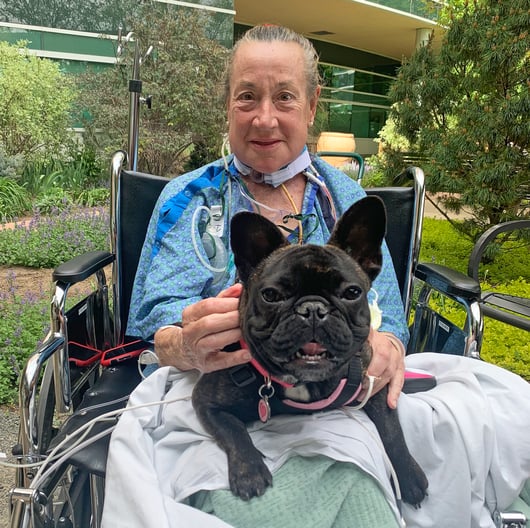 Jane Hart receiving visit from her dog Winnie during her hospital stay.

Shelby even managed a few canine visits for Jane in the hospital courtyard, and helped her get settled back into their shared Denver townhome, where she walks at least an hour a day on a treadmill.

“Every doctor, every student, every nurse, even the housekeepers were smiling angels on my cancer journey,” Jane says. “Seeing Liz, my speech therapist, every day, showing me that I can speak and I can be normal was so powerful!”

Jane also had additional cycles of Durvalumab following her laryngectomy surgery, receiving the last on Nov. 9.

Treating HNSCC patients with Durvalumab and high-dose radiation within a specific timeframe before surgery reduces immune exhaustion and reawakens the immune system to attack and kill the cancer, Karam and her co-researchers found.

Another significant outcome of the research, found through translational analysis of participant blood samples, is that T cell memory response may be able to tell clinicians before surgery whether a patient will develop long-term memory to prevent the cancer from recurring.

“What I love about this research is it’s a complete circle,” Karam says. “We see direct translation from the lab to the bedside, and it also has reverse translation of studying patient samples in the lab to understand the mechanisms of response. We’re studying that now to understand even more the differences between treatment responders and non-responders.”

Jane was among the 89% of expansion cohort study participants who, after receiving the optimal radiation dose, showed major pathological response or complete response to the treatment. This outcome far exceeded Karam’s expectations and demonstrates the tremendous potential for specifically timed immunotherapy treatment for HNSCC, which currently have a five-year survival below 50%.

“These findings may be a little provocative, but I want to emphasize that the goal is not to replace surgery, but to continue evolving with the science so we can always be offering the best care for our patients,” Karam says. “All of us — whether surgeons, medical oncologists, or radiation oncologists — need to be doing whatever is in our patient's best interest, beyond what we learned in residency. If there’s now a way to save a patient’s voice box, for instance, that’s critical. Jane has experienced a devastating life change. What’s inspiring, though, is that she has done it with such positivity and with an attitude that her experiences will benefit those who come after her.” 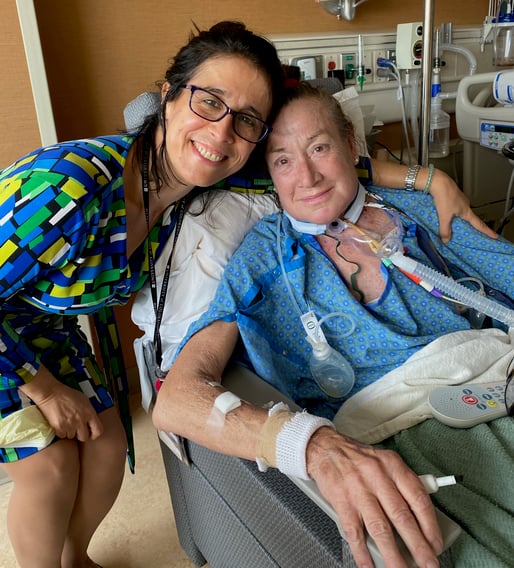 “The moment I met Dr. Karam, all the unknowns vanished,” Jane says. “She was my doctor but also a friend. How lucky I am to have such daily joy from the greatest team.” 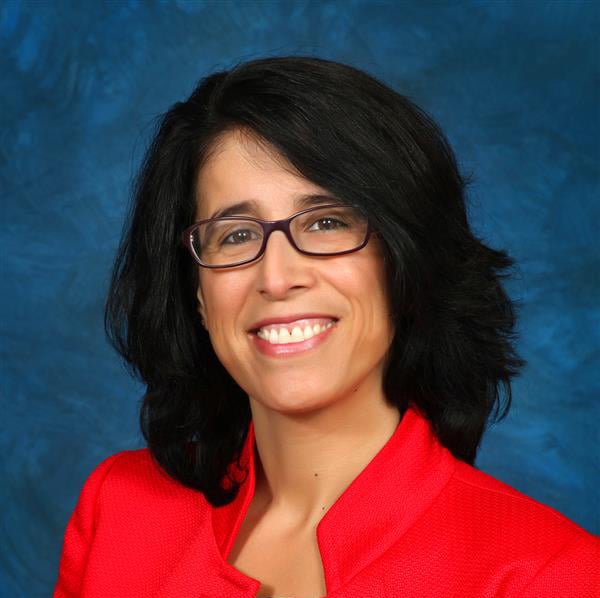