Amanda Vegter did not have time for whatever it was that she felt on the side of her left breast.

She was six weeks into her fourth year of veterinary school, she had backpacking trips to go on with her boyfriend, walks to go on with her two dogs, plus plans for a summer externship in South Africa. She was busy and happy and it was probably nothing.

But that firm spot she first felt on her breast in January 2021 while working out at her boyfriend’s house didn’t just go away. Now she can look back and shake her head – of course it was breast cancer.

And because of aggressive, multidisciplinary care that has included cutting-edge microsurgery performed by University of Colorado Cancer Center member Justin Cohen, MD, she still has plans. She’s 36 now and eagerly looking down the road to a veterinary career, to more adventures with her dogs and her boyfriend, to time with her family, to the possibilities in each day that comes.

She was doing jumping jacks when she first noticed a firm spot on the side of her left breast that hadn’t been there before.

“I was like, ‘Huh, that’s weird,’ but I didn’t think much more about it because I just assumed it was something benign,” Vegter explains. “My sister had had a benign small mass in her breast three or four years ago and she told me at the time that we have really dense breast tissue in our family. Plus, my boyfriend and I like to backpack, so I thought maybe I’d build up scar tissue from wearing a backpack.” 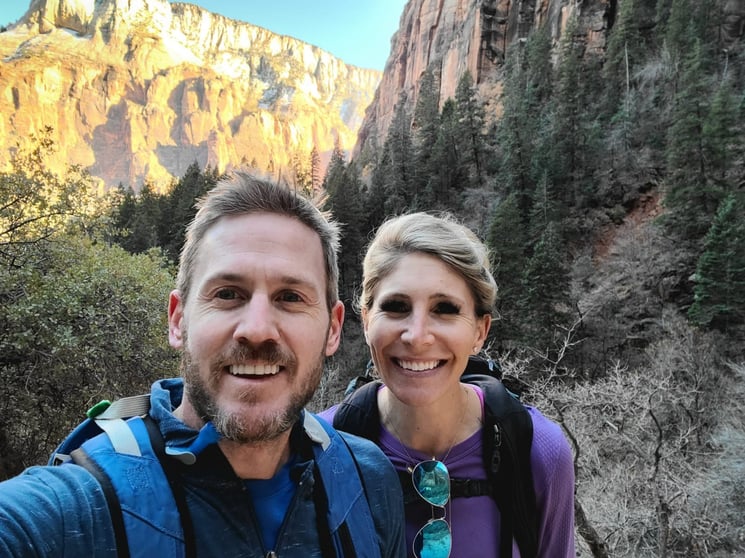 Amanda Vegter, right, and her boyfriend, Brandon, enjoy hiking in the Colorado backcountry.

So, she kept working out, kept attending class as a veterinary student at Colorado State University, kept making plans for her summer externship at Moholoholo Wildlife Rehabilitation Center in South Africa. A few months after initially feeling the firm spot on her breast, she noticed it was a little more firm “but it was pretty deep, so it was still hard to tell whether it was anything,” she recalls.

She attended a routine women’s health appointment that included a breast exam, and the option of pursuing a mammogram was discussed. She decided to postpone it until she returned from South Africa, since she was “young for breast cancer” and not sure if insurance would cover it. But it kept growing while she was overseas, to the point that she grew increasingly worried. And then she got tick bite fever, causing the lymph node in her left armpit to balloon.

By the time she completed a course of antibiotics in Africa, her swollen lymph node had returned to normal but the firm spot on her breast had grown.

Once she returned to Fort Collins and completed a few more weeks of externships at a zoo, Vegter emailed her primary care provider, who pushed her to schedule a mammogram. That screening revealed four tumors in her left breast, one of which was quite large and all of which had visible calcifications. Clinicians at the breast diagnostic center squeezed her in for an ultrasound and biopsy immediately after her mammogram.

Amanda Vegter has returned to her veterinary studies and treating patients following her breast cancer diagnosis and treatment.

She received her pathology report the following morning. “I remember sitting in my car, really tired because my dog had had blowout diarrhea the night before, when I got the ding on my phone,” Vegter remembers. “I came inside and made a bunch of chicken and rice for my dog, and as I was stirring the pot and had all this steam on my face, I remember thinking I couldn’t process what I’d just read. It seemed so surreal to be standing there making food for my dog and knowing that I had cancer.”

Initially, she thought she could side-step the emotional tsunami that often follows a cancer diagnosis by staying busy. She had to get medical leave from school and figure out her financial aid situation and make appointments – she texted a friend who’d been through breast cancer treatment, and the friend recommended making an appointment at the CU Cancer Center – and tell her family and friends. That’s when the tears came.

“It was a pretty emotional first couple of weeks,” she says. “But then I just went into attack cancer mode.”

She met with CU Cancer Center member Elena Shagisultanova, MD, PhD, an assistant professor of medical oncology in the CU School of Medicine, who coordinated with Farrah Datko, MD, her oncologist in Fort Collins. Between a deluge of scans and tests, she had to make decisions about pursuing egg retrieval prior to chemotherapy, which she decided not to do.

She began chemotherapy in September 2021, slightly less than a month following her diagnosis, and credits her network of support for helping her through: Her parents, who are retired, flew in from Minnesota once a month when she had her infusions, and her sister, who lives in Seattle, also came to Fort Collins once a month. Her brother and boyfriend, who both live in Denver, were also huge supports. To update her friends across the country, and for her own mental health, she wrote about her experience on a blog cheekily titled Battle of the Boob.

“Although being diagnosed young is really hard, it’s also beneficial in that I was able to do pretty well for chemo,” Vegter says. “My dogs are used to going for a walk three times a day, every day, and they didn’t know I was sick, so for all of us it really helped to stay in our routine. I tried to be careful in terms of not exposing myself to germs, but I walked every day and did mild workouts throughout, and I think that really helped.”

Amanda Vegter with her two dogs.

Following six months of chemotherapy and a two-week break, Vegter had a double mastectomy and lymph node removal in February. She was at stage two breast cancer and of the 15 lymph nodes Gretchen Ahrendt, MD, removed, four were positive for cancer.

As a member of Vegter’s multidisciplinary care team, Cohen, an assistant professor of plastic and reconstructive surgery in the CU School of Medicine, determined that she was a good candidate for lymphatic reconstruction, a technically demanding microsurgical procedure that can be performed at the same time as lymph node dissection. During the procedure, tiny lymphatics are re-routed to adjacent veins.

“Like many patients who have lymph node dissection for breast cancer, Amanda had a 30% lifetime risk of developing lymphedema, which is a painful swelling in the extremities that can really impact quality of life,” Cohen explains. “By performing lymphatic reconstruction, we could reduce her risk to 5%.”

Vegter was a “model patient,” Cohen adds. “This is really cutting-edge surgery that’s only done at major cancer centers, and she was very savvy, very engaged in the process, and very willing to take this step that could have significant long-term benefit for her.” 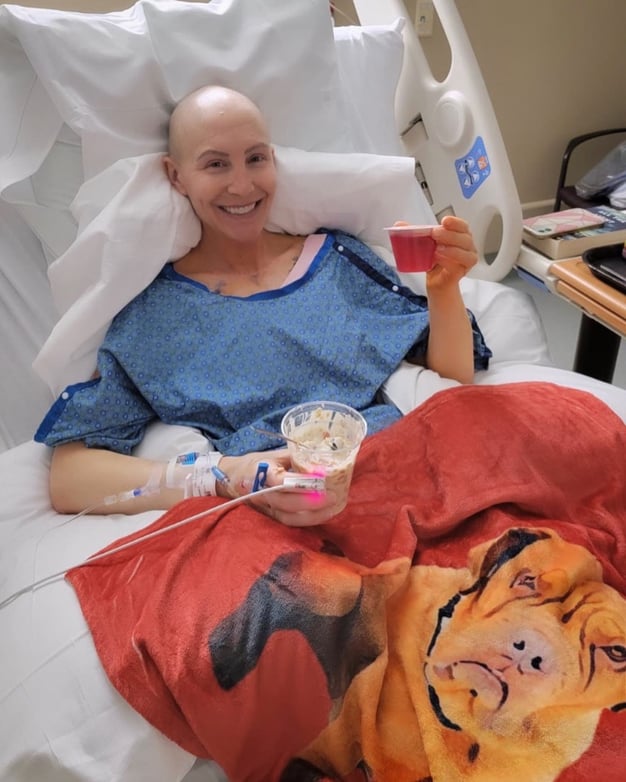 Amanda Vegter during a hospital stay for cancer treatment.

She came through her surgery well, as well as the six weeks of radiation that followed, aided by physical therapy and acupuncture treatments. In the midst of her many scans, clinicians saw a mass on her liver. Results from a biopsy the month after the mastectomy showed inconclusive results, but a PET scan of her liver lit up the screen and she was given a 95% chance of being at stage 4 breast cancer, meaning it had spread to other parts of her body.

However, surgery in April to remove the left lobe of her liver showed the mass was benign. She would have savored the news more had she not gotten a C. diff intestinal infection and endured five terrible days in the hospital, “definitely worse than anything I experienced that was directly related to cancer,” she says.

Planning for the future

Since her surgeries, Vegter has returned to her veterinary studies and will graduate in spring. She plans to complete breast reconstruction surgery with Cohen after graduation, replacing the expanders she currently has in place. She also is participating in a national, multi-site clinical trial for an oral chemotherapy drug called Tucatinib.

Of the many insights she has gained through her cancer journey, one of the most profound has been learning to grant herself grace. 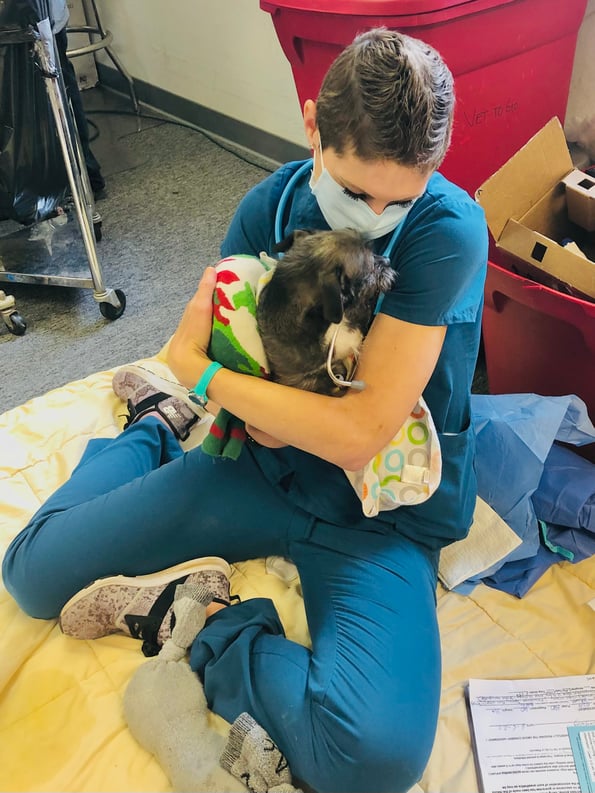 Amanda Vegter with a canine patient following her return to her veterinary studies.

“For the most part I’m a really positive person, but there were days when I wasn’t and I wanted that to be OK,” she says. “I didn’t want to feel pressured to be this strong, super positive person every day, because it’s OK to feel really sad some days. I have a therapist who I talked with throughout, and especially when my hormones were all over the place because of forced menopause, she was like, ‘This is a chemical thing. Your body and your brain chemistry are changing, and it’s totally normal to feel really mad and sad some days.’ She helped me realize I do not have to be this super strong person for myself or others all the time.”

Because she’s focused right now on completing her rigorous studies, she doesn’t have fixed plans for the future but envisions establishing a mixed animal practice and eventually working in wildlife conservation and rescue.

“My boyfriend has a dental practice in Denver, so I can envision a future for us with a rescue farm with a lot of disabled animals,” she says. “Much to his fear, I think that’s going to be our reality.”

To stay sane, she works out or takes her dogs hiking in the mountains, and on days when she needs it remembers another vital lesson courtesy of cancer: “There were days when I didn’t feel like I was a contributing member of society anymore, and I was talking about it with my brother one time,” she says. “He’d been talking about my cancer journey with his therapist and he told him, ‘The point of her existence right now is just to survive and get through it. Her experience is going to help future breast cancer patients, so her purpose right now is to survive. She doesn’t need to feel like she should be doing anything beyond that.’” 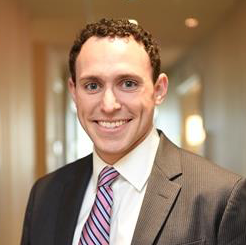