A team of investigators led by members of the University of Colorado School of Medicine faculty at CU Anschutz Medical Campus has identified a connection between mucus in the small airways and pulmonary fibrosis.

The findings are published in Nature Communications. 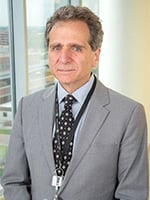 David Schwartz, MD, chair of the Department of Medicine at the CU School of Medicine

“The overproduction of a lung mucin (MUC5B) has consistently been shown to be the strongest risk for the development of idiopathic pulmonary fibrosis (IPF) and most recently rheumatoid arthritis-interstitial lung disease,” said senior and corresponding author David Schwartz, MD, chair of the Department of Medicine at the CU School of Medicine.

Schwartz adds, “The findings in this manuscript provide a critical breakthrough in understanding the cause and potentially the treatment of IPF by demonstrating that excess mucus in the small airways can cause lung fibrosis, in part, by impairing the mechanism of lung clearance. In aggregate, these discoveries have provided the means to identify an at-risk population, diagnose the disease prior to the development of irreversible scarring, focus on a unique therapeutic target (MUC5B) and a specific location in the lung (distal airway), and create a novel pathway for therapeutic intervention for a disease that is currently incurable.”

A critical need for early diagnosis

Idiopathic pulmonary fibrosis is the most common type of progressive lung fibrosis. Over time, the scarring gets worse and it becomes hard to take in a deep breath and the lungs cannot take in enough oxygen. The average length of survival of patients with IPF is three to five years, and a critical unmet need is to identify patients before the lung is scarred irreversibly. 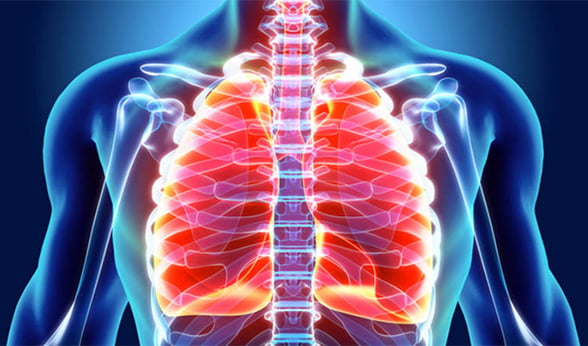 Mucociliary dysfunction is an emerging paradigm in lung diseases. Previously considered a characteristic specific to obstructive diseases such as asthma and chronic obstructive pulmonary disease, and genetic diseases such as primary ciliary dyskinesia and cystic fibrosis, the importance of mucins, mucus, and mucociliary interactions has surfaced in diseases of the lung periphery, such as adenocarcinoma and IPF.

The investigators on the current study in Nature Communications hypothesized that the potential role for mucociliary dysfunction as a driver of IPF pathology is supported by unique gene expression signatures in IPF. The investigators found that a specific genetic characteristic, known as the MUC5B promoter variant rs35705950, which results in a marked increase production of mucus in the lung is the strongest genetic risk factor for IPF. They also found this is the strongest risk factor for rheumatoid arthritis-interstitial lung disease.

The findings suggest that targeting MUC5B in the terminal airways of patients with preclinical stages of interstitial lung disease represents a strategy to prevent the progression of preclinical pulmonary fibrosis.

“This study shows how genetic findings in human diseases can generate new hypotheses, such as those related to impaired mucociliary clearance, that may lead to the discovery of novel molecular mechanisms and the development of early diagnostics and more accurate treatments for pulmonary fibrosis,” said James P. Kiley, PhD, Director of the Division of Lung Diseases at the National Heart, Lung, and Blood Institute.

The research in the study is supported by Jennifer Matsuda, PhD, at National Jewish Health for generating Muc5b transgenic mice, Melanie Sawyer at Parion Sciences for assistance with in vitro mucolytic testing, and Jake McDonald at Lovelace Respiratory Research Institute for support with aerosol delivery. This research was supported by the National Heart, Lung and Blood Institute, National Institute of Diabetes and Digestive and Kidney Diseases, Department of Defense, Cystic Fibrosis Foundation HILL16XXO and BOUCHER15RO, and Parion Sciences, Inc.