PART TWO (of five) – Uncle Doc: A POW’s Story of Survival, Compassion and Hope: Jack Comstock, MD, graduated from the CU School of Medicine in 1938 and joined the Army in 1941, stationed first at Fitzsimons General Hospital (now the Fitzsimons Building at CU Anschutz), then a post at Sternberg Hospital in Manila, Philippines. War broke out later that year with the bombing of Pearl Harbor. After the Japanese invaded the Philippines, Comstock was taken prisoner and served as a POW physician for almost three years until he was freed in February 1945 by the U.S. Army Rangers.

Jack Comstock, MD, was living out his dream in the South Pacific in late 1941. He had achieved his goal of becoming a doctor, joined the Army and landed an attractive peacetime post – attending surgeon at Sternberg Hospital in the Philippines.

In his late 20s, the Fort Collins native and University of Colorado School of Medicine (SOM) graduate evinced charisma and confidence. Handsome and athletically-built, the dimple-chinned doctor was Bogart-esque in his Army uniform.

As a physician, Comstock displayed a compassionate, yet no-nonsense, demeanor during his rounds at Sternberg. “I think he was probably a pretty tough taskmaster, and he could not take a goldbricker,” said Jim Kilburn, a relative of Comstock’s from Boulder.

Jacquie Kilburn, Comstock’s niece, recalled that Uncle Doc was on a debate team at Boulder Prep (now Boulder High School). “And they won everything they ever did,” she said. For him, "I just think that it wasn’t a choice. He would do the best he could no matter what. And he would expect the best of anybody else – as much as they could.”

That same drive for excellence set Comstock apart as he went on to earn honors in chemistry at CU Boulder, then graduate in 1938 from the CU SOM and start his first medical position in 1941 at Fitzsimons General Hospital on what is now the CU Anschutz Medical Campus.

Comstock was on a track to both academic and military success. But everything unraveled on the morning of Dec. 7, 1941.

The Imperial Japanese Navy Air Service bombed the U.S. naval base at Pearl Harbor, Hawaii, killing 2,403 and thrusting the United States into war. Simultaneously – 18 hours ahead – 200,000 Japanese attacked the Bataan Peninsula where Sternberg was located.

Comstock was shifted to a ward surgeon post at General Hospitals #1 and #2 on Bataan, where American and Filipino forces battled the Japanese for control of the peninsula and the nearby island of Corregidor.

Comstock was plunged into the center of an epic battle, one that U.S. Gen. Douglas MacArthur erroneously thought the U.S. could win. At just one of the hospitals, 6,500 patients suffered war injuries, malnutrition and tropical disease. By early April 1942, after four months of intense fighting, the U.S. and Filipino forces surrendered Bataan to the Japanese.

Shelling continued for several weeks before the Japanese took Corregidor, a speck in Manila Bay.

“(Before the surrender) Corregidor was firing back, and the hospitals were right in the way,” said Steven Oboler, MD, the POW physician coordinator at the Denver VA Medical Center, where he first met Comstock in 1983. “A number of times there were explosions, and patients and staff were killed by shrapnel and bombs. It was not a safe place to be.”

On April 29, 1942, Comstock wrote in his diary: “This morning Corregidor sure took and gave Hell. By far the worst artillery duel so far. Shrapnel was falling like hail around the Receiving Ward. Believe me, we all kept in our covered fox holes or screened by bamboo thickets.”

The end of freedom was swift but brutal.

“Much air and artillery activity this morning. White flag hoisted at 10 a.m. Don't like it at all. Red Cross flags hung all over hospital,” Comstock wrote on April 9, 1942. “(Enemy) came in after dark. No more washing in creek, no smoking after dark, must use blue-colored flashlights at night. Death penalty if not complied with. Wonder about all sick and wounded at front lines with no one to bring them in.”

Conditions worsened as the Japanese rounded up about 80,000 U.S. and Filipino prisoners of war, forcing them to march 70 miles to prison camps, including Camp O’Donnell, in the north. The infamous Bataan Death March cost the lives of nearly 16,500 Filipinos and about 650 Americans.

“The Japanese realized that they had to do something about it,” he said. “They needed slave laborers, so letting the POWs die of starvation and disease was not in their best military interests.

“That’s where Cabanatuan – POW camps #1 and #3 – came into existence,” said Oboler, noting where Comstock ended up. “They were much more organized. They used some public health measures, including covered latrines and better access to clean water. O’Donnell barely had any water. The number one work detail was burial detail.”

In early May 1942, Comstock’s medical detachment from the general hospital – a group of several hundred doctors, male nurses, orderlies and lab technicians – was told it was moving north along the peninsula. On May 11, the group rode buses to Little Baguio. “What a scene of ravage and desolation along the road,” Comstock wrote in his diary, referring to the remains from the Bataan Death March, which the Japanese army had carried out in a brutal manner, strategically to lower the number of POWs it had to manage. “Skeletons, stinking to hell, strung along. So much waste and destruction!”

Later that month, the medical unit rode trucks to San Fernando before the convoy continued to a stopover at Bilibid Prison. Lastly, the unit boarded a train bound for the outskirts of Cabanatuan, where Comstock would spend most of his imprisonment.

On May 31, Comstock wrote, “Went east from Cabanatuan. Hiked over 10 miles by 11:30 a.m. Very hot. Little rest. Carried a heavy load. Many threw their packs away. Others passed out. Was sure grueling business. I couldn’t have gone much further.”

Prior to becoming a POW, Comstock had already been documenting his Army experience in a journal. But during almost three years of imprisonment, he remained a diligent diarist, writing entries that would become the only real-time account of practicing medicine as a POW in the Pacific Theater of World War II.

Comstock wrote about the POWs’ daily struggle with disease, death, hunger, homesickness, boredom and the horrors committed by their Japanese guards.

In the POW camp, much of daily life as a physician amounted to managing the “three Ds,” as they were called – diphtheria, dysentery and death. Comstock chronicled the camp’s daily death toll, usually in the first line of each diary entry.

On June 13, 1942, he wrote: “Deaths continue at a rate of 30 or more each day. All Americans. Majority could be saved with proper treatment and medicine… Fighting in southern Luzon. MacArthur supposed to have broadcast he would be back in Manila before July 4. Many good rumors. No bad news. Am very optimistic about an early deliverance.”

While many diseases* ravaged the prisoners, malaria and dysentery were especially rampant, killing thousands early in the war. Quinine used to treat the diseases was in short supply, and deaths skyrocketed in the POW camps.

“When they got (quinine), that knocked the death rate just cold,” Oboler said. “It was good news and bad news. Quinine can treat the acute fever and get the guys feeling better, but unfortunately it’s not a vaccine, so you can get re-infected and have (the disease) go on and on. The other problem (for prisoners) was meat deficiency, protein deficiency. … As the war went on it became more and more of a problem because the prisoners would get some vitamins, but they wouldn’t get any meat.”

‘Tests your core values as a physician’

Still, every day was an exercise in medical improvisation, trying to keep disease-ridden, malnourished and oft-dispirited soldiers alive.

Comstock learned to improvise during the three months at the general hospitals on Bataan, when shrapnel rained upon his ward, and medicines and bandages were in short supply. But the conditions quickly worsened as the war progressed.

“Think about the pandemic now,” Oboler said. “There've been 18 months, and we've got vaccines, and you hear about the burnout among healthcare providers and first responders. I can't imagine what it would be like as a POW physician when you don't know how it's going to end. You just go from day to day ... He had so little to work with, and he didn't dwell on it. It was just what it was.”

“Think about the pandemic now. There’ve been 18 months, and we’ve got vaccines, and you hear about the burnout among healthcare providers and first responders. I can’t imagine what it would be like as a POW physician when you don’t know how it’s going to end. You just go from day to day … He had so little to work with, and he didn’t dwell on it.” – Steven Oboler, MD

Edward Kinzer, MD, a fellow CU SOM alumnus (Class of 1952) and Air Force veteran, has faced conditions similar to Comstock. Kinzer spent about a year in Nigeria and Mozambique in the 1990s, treating many victims suffering from starvation and the atrocities of war.

“It tests your core values as a physician,” he said, “whereby you have to come up with your diagnosis based on your findings rather than on X-rays and other modern conveniences.”

A leg saved, a long-delayed note of thanks

In July 1942, in just the second month of captivity, a soldier was brought into Cabanatuan with a badly wounded and gangrene-infested left leg. Doctors advised the leg be amputated, but Comstock opted to cut the wound open, clean it and fill it with sulfanilamide powder.

“I have always been very grateful for this, and upon release from POW camp in Japan while recovering… I tried to locate you but was informed that you were killed when our Forces sunk an unmarked POW ship bound for Japan,” Bradley wrote. “I don’t believe you can imagine my surprise and pleasure last week to find your name and address in the Colorado directory… I wish you a long and happy life.”

Indeed, although he became legally blind late in life, Comstock lived an active post-military life in Colorado. Oboler and Comstock regularly met in the 1980s when Comstock went to the Denver VA Medical Center for his vision problems – caused by histoplasmosis, a condition which stemmed from a weakened immune system during his POW days – and later Parkinson’s disease.

Oboler recalls asking Comstock about Bradley’s case after reading about it in the diary.

“At first he sort of didn’t remember,” said Oboler, noting Comstock’s customary humility. “Then he smiled. He was really proud of it. He couldn’t remember specifics, but he said, ‘Well, at least I saved one soldier.’”

Photo at top: American POWs on the Bataan Death March.

Coming in Part Three: Instilled Hope, Medical Calling Fuel WWII POW Doctor's Drive to Survive: Witnessing unspeakable atrocities and battling constant depravity, POWs in the Pacific Theater of World War II required deep reserves of resilience and hope. Jack Comstock, MD, grounded in a passion for his profession and a desire to serve, exhibited the necessary attributes of a survivor. 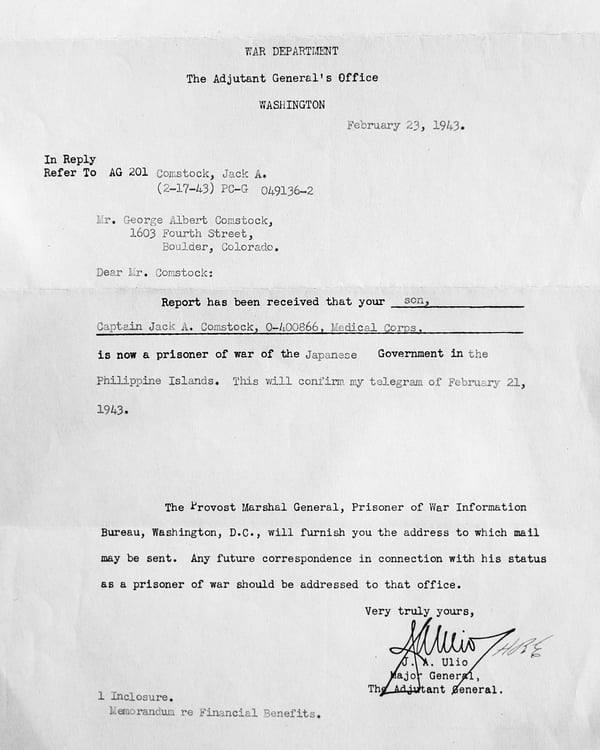 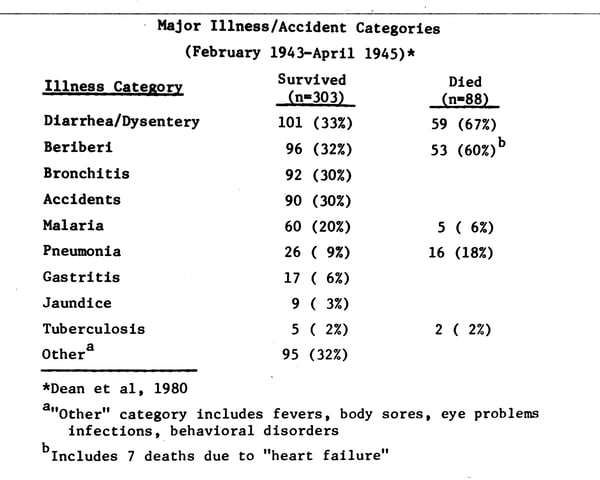 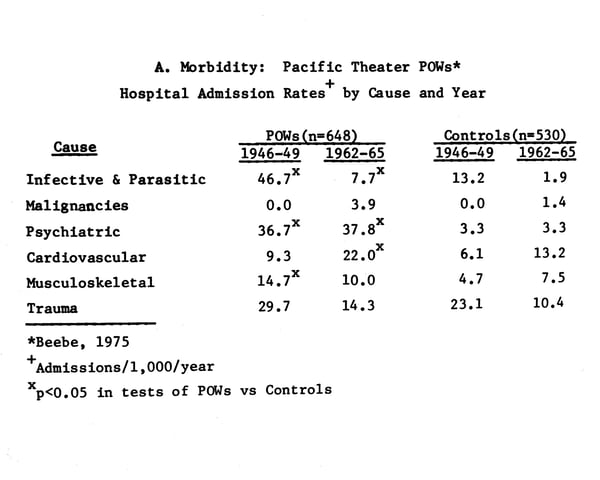 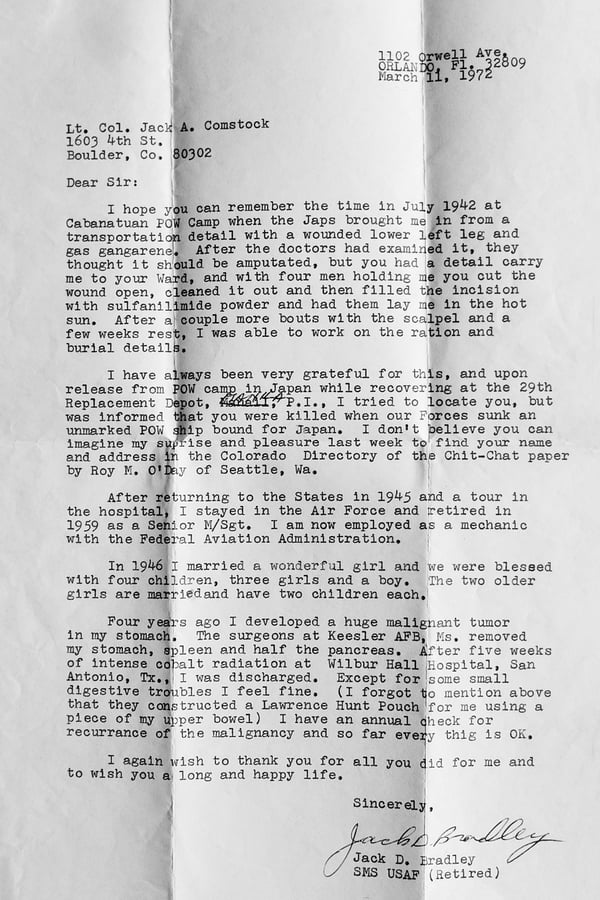