Home News Returned to Freedom, POW Doctor Lives Out Years in Noble Fashion back to News

PART FIVE (of five) – Uncle Doc: A POW’s Story of Survival, Compassion and Hope: Jack Comstock, MD, graduated from the CU School of Medicine in 1938 and joined the Army in 1941, stationed first at Fitzsimons General Hospital (now the Fitzsimons Building at CU Anschutz), then a post at Sternberg Hospital in Manila, Philippines. War broke out later that year with the bombing of Pearl Harbor. After the Japanese invaded the Philippines, Comstock was taken prisoner and served as a POW physician for almost three years until he was freed in February 1945 by the U.S. Army Rangers.

In fall 1944, prisoner-of-war Jack Comstock, MD, was assigned to travel to Bilibid Prison in Manila then to a boat along with 500 slave laborers bound for Japan. With the medical detachment approaching, Comstock knew the time had come.

He needed to bury the latest stash of diary entries underground – literally.

As he’d done throughout his captivity, Comstock stowed a pile of gum-wrapper-sized scraps on which he’d been writing into a bottle and buried it in the sandy ground at camp Cabanatuan. “He couldn’t tell me what the jar was, but it sounded like a big mustard jar,” said Steven Oboler, MD, Comstock’s doctor in the 1980s in Denver.

Shortly before boarding the hell ship, Comstock was reassigned to a detail at Fort McKinley, averting probable death aboard the Oryoku Maru. “It was just by luck, and he never quite understood why (the reassignment happened),” Oboler said.

By surprise twist, Comstock – and his diary – survived.

The squadron of distant specks-turned American planes that Comstock spied on the horizon in September 1944 sparked a glimmer of hope within him and indeed presaged a turn in the war. By early February 1945, Allied forces had retaken Luzon in the Philippines.

On Feb. 4, 1945, Comstock, who by this time had been transferred from Fort McKinley back to Bilibid Prison, wrote, “Americans knocked open a door in Bilibid wall at 7 p.m., but could not come in because of bars. … They were part of advance units. What a wonderful sight to see free Americans. … Many fires burning … sky dark with smoke. Sun very red and dim behind the smoke as it set. It all looked like the rising sun of Japan was setting tonight.”

Then on the morning of Feb. 5, he described the moment of being set free by the U.S. Army Rangers: “Americans have moved into the compound with machine guns, rifles, etc. … It is impossible to describe how happy we all are. Got to send a radiogram home. Wonderful! Just to see these soldiers in their green uniforms … all well-nourished and looking plenty tough.”

Gen. MacArthur gave all American POWs captured in the Philippines 30-day leaves to retrieve personal belongings. Two weeks after liberation from Bilibid, on Feb. 16, 1945, Comstock was driven back to his prison camp outside of Cabanatuan by an Army Intelligence officer:

“Was a long, hot, dusty trip, but worthwhile,” the doctor wrote. “I got my diary and personal papers… Also got other personal records of other officers… Camp was a mess… Thoroughly looted and looked very dilapidated.”

He remained on Luzon for a short time after the rescue. He closed the nightmare of his South Pacific years with this dispatch, on American Red Cross stationary and dated Feb. 8, 1945, Philippine Islands:

“Dear Mama and Dad: It would be impossible to describe how happy I am. To be free again and back under the American flag is something that only a prisoner of war, especially of the Japanese, can really appreciate.”

Back in the States at last, Comstock continued his medical career in the newly created U.S. Air Force (Strategic Air Command), including a stint as post surgeon at the Roswell, N.M., Air Force Base. He was a medical observer at the first hydrogen bomb test at Bikini Atoll in 1947. Comstock contracted ocular histoplasmosis while stationed in the Midwest and began to lose his vision late in his career. He became the personal physician to Gen. Curtis LeMay and retired as a full colonel from the Air Force in 1957.

Uncle Doc returned to Boulder where he cared for his parents and other family members. He became revered in his neighborhood for masterful gardening and culinary skills, including the ever-popular “Comstock float” – an ice cream-and-soda treat – until his death at age 81 in 1996 from complications from Parkinson’s.

Retirement was a satisfying and family-centered period of life for the decorated veteran. However, he remained reticent about his experience as a POW.

“He raised flowers in the garden. He rode his bike because he couldn’t drive; he was legally blind,” said Nancy Wittemyer, one of Comstock’s nieces. “He had an extensive collection of classical music records and a wall full of good literature. He took care of I don’t know how many people, because I think he felt gratitude.”

Jacquie Kilburn, another niece who lives in Boulder, isn’t sure what prompted her uncle’s reticence about his war days. While acknowledging that survivor’s guilt can manifest in people in the wake of traumatic events, Jacquie never noticed Uncle Doc struggling with feelings of guilt related to his POW experience.

“I just saw him making the decision to make the most out of life,” she said. “His food … the flowers, and just helping other people. I think he just wanted to move on for the most part.”

It was more self-consciousness than guilt that kept Comstock from wanting to publicly share his diary, which at one point he had an Air Force secretary transcribe into 130 typewritten pages. When Comstock broached his POW journal during an appointment with Oboler in the 1980s, the history-buff doctor was instantly intrigued. At first, the doctor said, it was “like pulling teeth to get him to talk about his military and POW experience.”

Jim Kilburn, Jacquie’s husband, said it was interesting to see Comstock’s view of the diary gradually soften over the years. “There were certain passages where he named somebody and said something (disparaging), and he was afraid that would get out later on,” Jim said. “Dr. Oboler was like, ‘Man, it’s been 50 years …’”

Writings from the underground

Finally, on Nov. 12, 1987, Comstock allowed the diary to go public. He agreed to have the original hand-scrawled notations be housed at the Uniformed Services University of the Health Sciences in Bethesda, Md. His permission note was succinct: “I hope the information here will be of interest and of value. Jack A. Comstock.”

Oboler, long fascinated by the courage of POWs in the face of unfathomable circumstances, is familiar with the Department of Veteran Affairs list of conditions – depression, coronary artery disease, hypertension, psychosis, anxiety disorders, etc. – that are prevalent among ex-POWs.

“It’s like first responders – the trained people on an accident scene. They see it, there’s blood, there’s gore, but they kind of turn that part of themselves off,” he said. “That’s why later we look for post-traumatic stress disorder, guilt feelings, nightmares, anxiety disorders, depression.”

Possibly, the act of recording daily events was Comstock’s way to process the moments within the larger story of war, a way to share events as he saw them.

As Oboler observed, Comstock made no mention of faith nor belief in God anywhere in the diary. But he often wrote of hope, and he frequently mused about family and home.

Psychologically speaking, the VA physician said, Comstock “did remarkably well” in his post-military life. Oboler recalled a conversation in which the retired colonel expressed sadness about those who perished aboard the Oryoku Maru and not being there to help the wounded in the tragedy. Comstock occasionally mentioned feelings of guilt about not being able to give POW patients more of his food, Oboler said, but he acknowledged that “if he were to get sick, it would ill-serve everybody in the camp.”

Mostly, Comstock seemed to be a man at ease in the world, going about his post-military life with vigor and pursuit of his passions. His days were full of activity, and at night he slept in a basement bedroom.

“I thought it possibly gave him a sense of security – and maybe he just did it for privacy,” Jacquie Kilburn said. “On the back porch was the entry. You lifted up a trap door to get down there.”

A storyteller, a hero 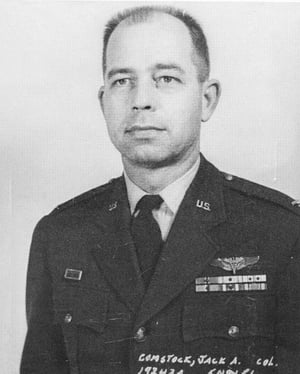 Perhaps it was in quiet, undisturbed spaces where Comstock reflected on his POW experience. How did he survive those endless days, weeks and months on the hot, sandy doorstep of despair, disease and death? Was it the click of a pen and scribbles on scraps of paper – done at grave risk – that ultimately saved him?

“He knew he had a function (as a storyteller), so he documented these things but didn’t dwell on them,” Oboler said. “As (Gen.) MacArthur said: ‘Son, these are the fortunes of war.’”

Melissa De Santis, MLIS, AHIP, director of the Strauss Health Sciences Library at CU Anschutz, where a digital copy of Comstock’s POW diary is housed (Part One, Part Two), said the diary’s profundity comes through its perspective. Many historical accounts, especially those of war, get filtered through the perspective of leaders – the commanders in the field making the decisions.

“The reason this document is so important is that it is a personal story,” De Santis said, “and it gives us a glimpse of the day-to-day life of a prisoner.”

“The reason this document is so important is that it is a personal story, and it gives us a glimpse of the day-to-day life of a prisoner.” – Melissa De Santis, MLIS, AHIP, director of the Strauss Health Sciences Library

Most likely, the humble doctor from Boulder would’ve eschewed any superlatives attached to his character. Oboler, however, wrote in a prelude to the digital diary that Comstock was a “quiet hero to me… He not only survived, but his selfless actions – including being able to get the weakest men under his care an extra egg or banana – helped hundreds of others to survive.”

Comstock’s diary underscores the power of hope amid the most desperate of times, and it cemented a friendship between a Denver doctor-turned-war buff and a Boulder doctor-turned-Bronze Star winner.

Oboler shared with Comstock what another famous prisoner of war – and Hemingway-esque diarist – wrote about his own experience: “It is a melancholy state. You are in the power of the enemy… You must obey his orders, await his pleasure, possess your soul in patience. The days are very long; hours crawl by like paralytic centipedes.”

Winston Churchill penned this missive as a POW in the Boer War in South Africa in 1902.

Although Uncle Doc’s vision was failing, his eyes lighted up. “He absolutely loved it,” Oboler recalled. “He said he could completely relate.” 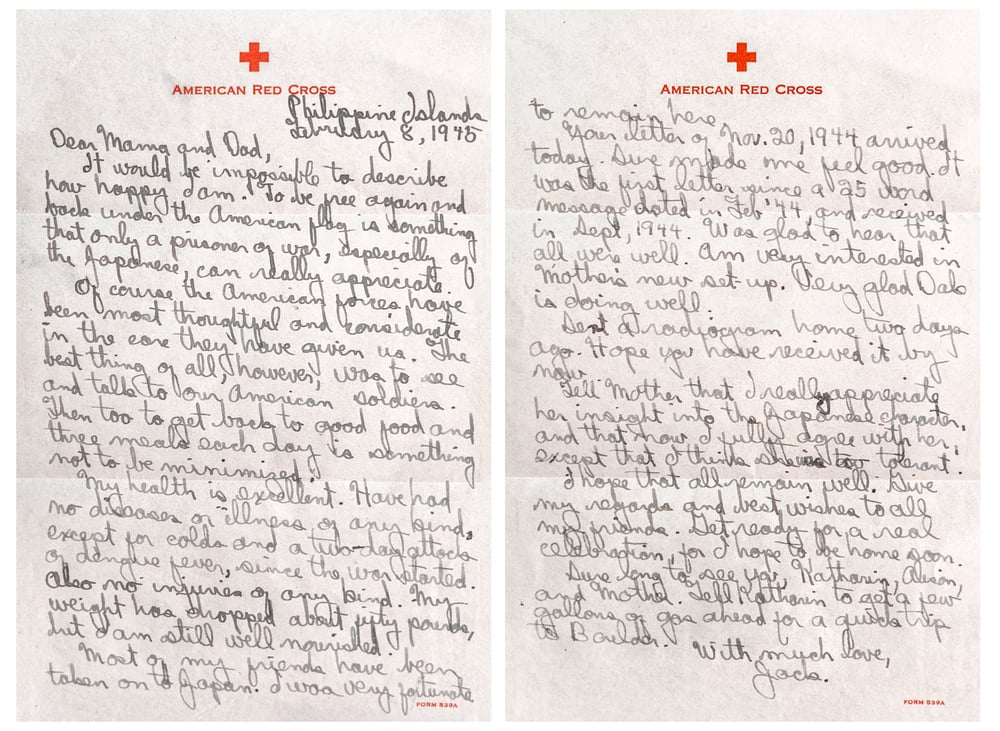 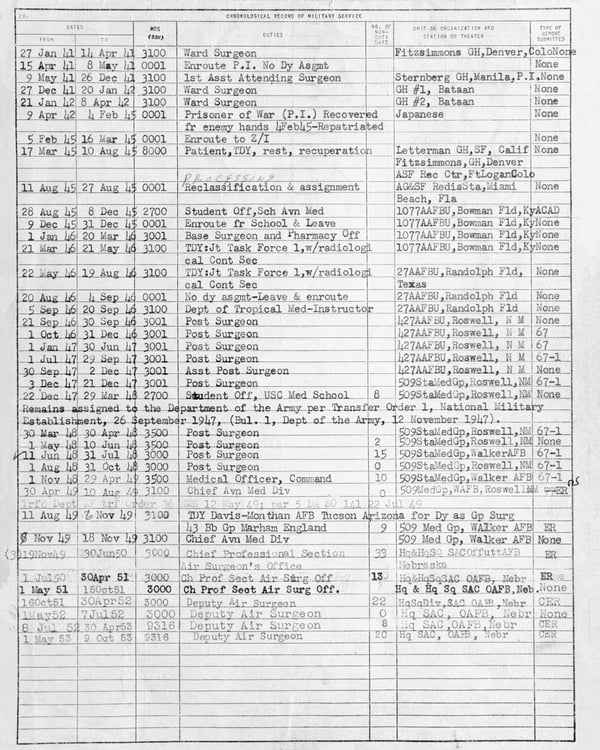 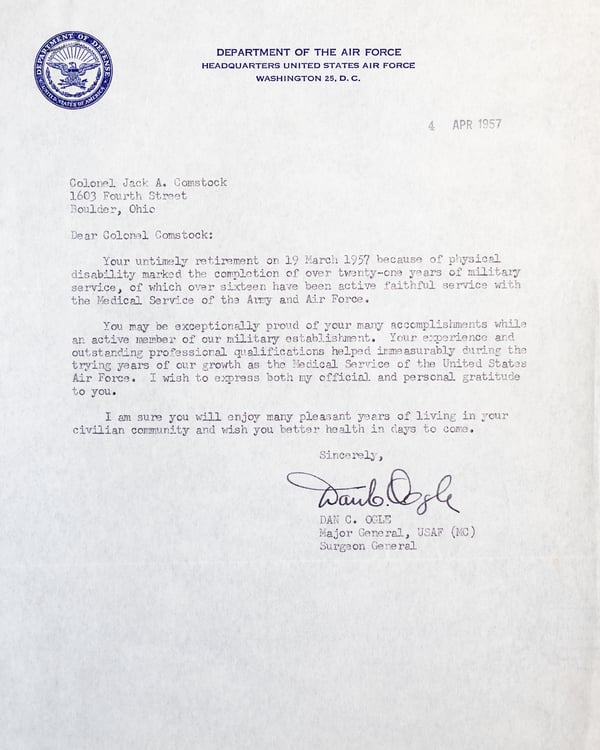